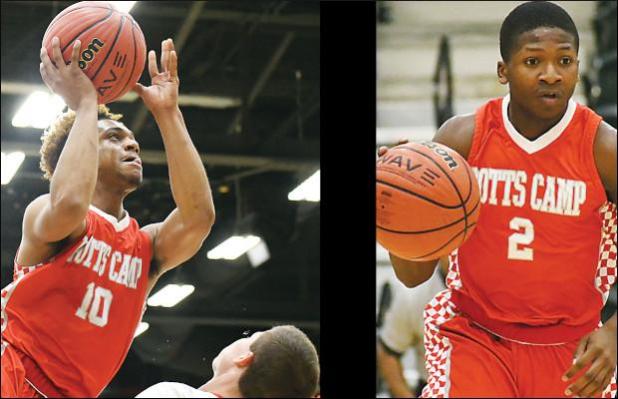 Photos by John Macon Gillespie/Calhoun Journal
(Left)Jaquives Muse (10) collides with a Calhoun City player as he puts up a shot in the lane. (Right) Kedavian Faulkner leads a fast break versus the Wildcats.

The road to redemption remained on track for Potts Camp with a state Class 2A quarter-final win Thursday night at Mississippi Valley State University.

The Cardinals, led by big man in the middle Mitchell Saulsberry, knocked off Calhoun City 75-72 for their second consecutive berth in the final four.

"We have said all year that our goal was to get back to Jackson and have a chance to redeem ourselves from last year," coach Jeremy Dillard said. "It feels good going back. We are focused on our goal of `one game at a time.'"

Potts Camp, eliminated in last year's Class 1A semi-finals, moved up a classification this season. They faced Philadelphia on Tuesday afternoon of this week at Jackson in the 2A semis.

With a win in that one, they advance to the state championship contest this Friday at 3 p.m. in The Pavilion at Ole Miss.

Saulsberry was the main man in the five-point win over the Wildcats last week at Itta Bena. He poured in 30 points, with 10 of those coming in the tight fourth quarter.

"I told Mitchell (Saulsberry) after the district tournament that we were about to ride him through the state tournament, and he has gladly accepted the challenge," Dillard said. "For a kid with 2,000 points and over 1,500 rebounds in his career, he doesn't disappoint, and the Calhoun City game was no different. We trusted him late, and he came through."

Potts Camp led 18-12 after one quarter, with Jaquives Muse nailing a couple of big threes. The game was tied at 36 at halftime. The Cards took a 55-53 lead to the final period.

In addition to Saulsberry's crucial showing down the stretch, Kedavian Faulkner and Walter Hamilton nailed some clutch free throws. Supporting Saulsberry's 30point performance were Muse with 16, Hamilton with 12 and Faulkner with 10.

It was the Cardinals' second win of the season over a very talented Calhoun City squad.

"Hat's off to Calhoun City," said Coach Dillard, whose team improved to 23-8 on the season. "They were out for revenge, and we simply wanted to prove that we were the better team. We accomplished that, and now we have to focus on the next game."

The other 2A semi-final contest this past Tuesday in Jackson matched Coahoma County versus North Forrest.

• Cardinals advance to 2A title game

Potts Camp will play for a state championship Friday at 3 p.m. in The Pavilion at Ole Miss.

The Cardinals defeated Philadelphia 73-53 Tuesday afternoon in the Class 2A semi-finals at Jackson.

Their opponent in the title game will be Coahoma County, which beat North Forrest 44-31 on Tuesday.