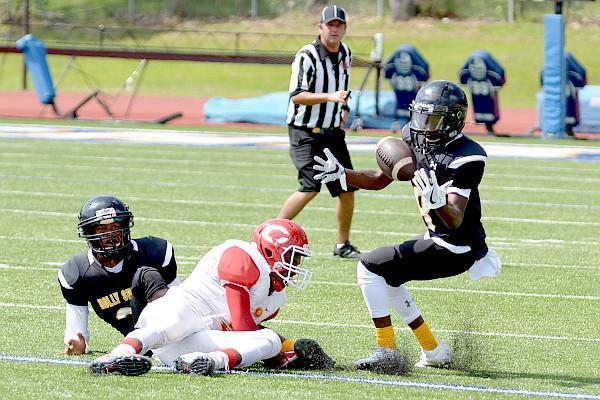 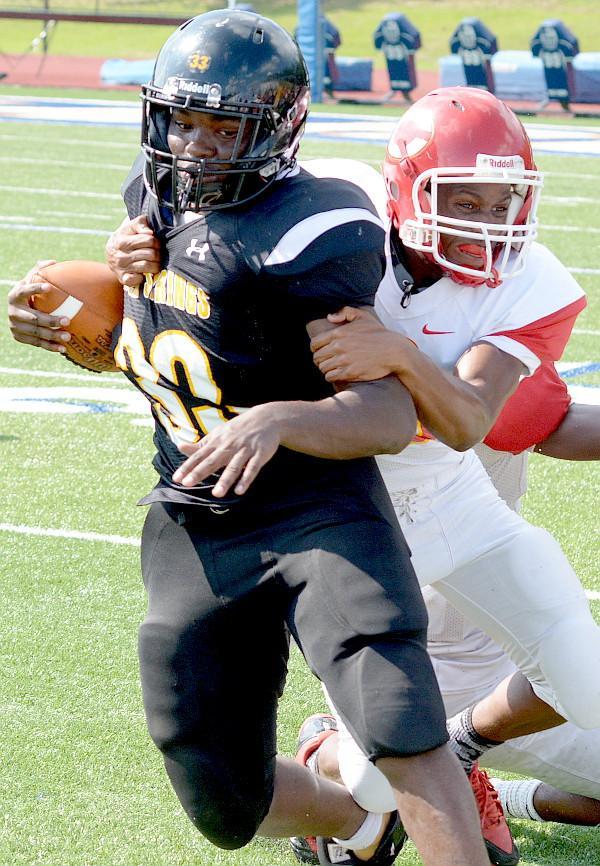 Photos by Dillon Day
Joshua Kimble (33) of the Hawks tugs for a few more yards. 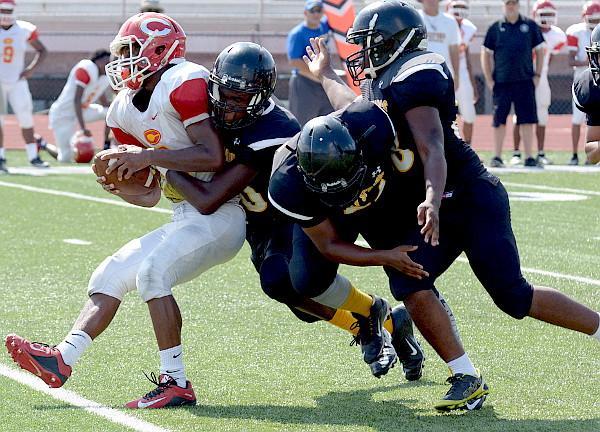 The aggressive Holly High defense tackles a Pirate for a loss Saturday in Oxford. Hawks are Teelan Brown (50), Willie Finley (51) and Jordan Holloway (38).

Donald Deans had a brief, to-the-point message for his Holly Springs Hawks after the jamboree Saturday.

“We won, but we were a little sloppy at times,” the head coach said. “We have to correct our mistakes and get focused on what we need to be doing. Next up is rivalry week; it’s one of the most important games you will play.”

“We will watch film (from the jamboree) and grade everybody,” Deans said. “The missed assignments, we will have to fix those. We have to get more effort out of everybody leading up to the Byhalia game and in the game itself.”

Deans said he particularly liked what he saw in the early going of Saturday’s jamboree contest versus the Pirates. That’s because both the defense and offense shined in the opening minutes.

The Hawks forced a three-and-out on Coffee­ville’s first series, and then the Holly High offense went 63 yards in eight plays for points on its initial possession.

Two big plays in the drive were a 12-yard pass from Dylan King to G’Tavin Terrell and a 19-yard run by Joshua Kimble. King threw to Antonio Evans for the 4-yard touchdown. LeAndrew Letz kicked the extra point.

It took just one play for Kadarreon Lumpkin to get loose. He dashed 47 yards along the right sideline for six. The point-after failed, and it was quickly 13-0.

Davionta Faulkner then got the Hawks’ second interception of the afternoon, and returned it 38 yards to the Pirates’ 12-yard line. But Holly High couldn’t cash in the turnover this time.

The Hawks made good on the opponent’s blunder this time. Lumpkin started one way and then cut across the field on his way to a 26-yard touchdown. The extra-point kick was no good to make it 19-0.

The Hawks’ Roy Vaughn recovered a Coffeeville fumble. Holly High marched into field-goal range but the three-point try was unsuccessful.

Both teams’ defense dominated the rest of the way. Ahmed Alhalemi recovered a fumble in the closing two minutes to stop a Coffeeville drive.

Kickoff time for the Holly High-Byhalia clash this Friday is 7 p.m.

The Indians won last year 14-6, their second straight victory in the series, and they kept the Mayor’s Cup on the west end of the county.