Photo by DeMill Dixon
Marquise Turnage (6) of Holly High fends off a Tishomingo County player as he tightropes the sideline. 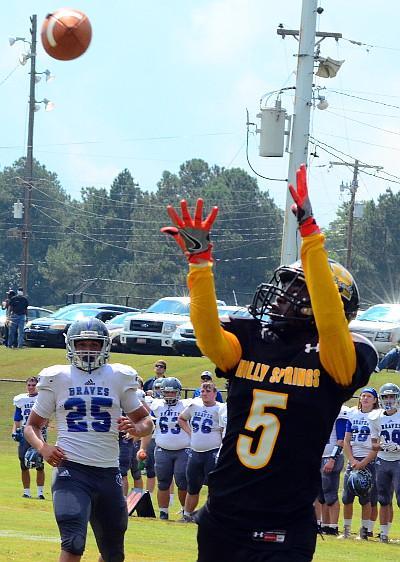 The Hawks, playing a home game postponed from the previous night due to lightning, toppled Tisho­mingo County 47-0. It was their fifth straight win after a season-opening loss.

The Hawks’ first touchdown capped a 70-yard, seven-play drive. Kadarreon Lumpkin carried five times to start the possession. With 4:08 to go in the first quarter, Dylan King threw short to Marquise Turnage, who reversed his field and outran all defenders 36 yards to the end zone. Ahmed Alhalemi kicked the extra point.

After the defense forced the Braves to a three-and-out, the offense traveled 75 yards in six plays this time. Lumpkin had a big 27-yard run. Joshua Kimble scored on a 5-yard carry. Alhalemi’s kick made it 14-0 with 11:25 left in the second quarter.

A few minutes later Alhalemi picked off a pass, which was tipped by teammate Xavien Phelps, but the Hawks couldn’t capitalize.

With 2:12 to go in the first half, the Holly High defense stopped Tishomingo County on a fourth-and-three play at the Hawks’ 13.

It took just six plays for the home team to tally more points. Lumpkin and King had first-down runs. Lumpkin threw to Xavier Scruggs for another. Then he connected with Derell Anderson, who sprinted down the sideline for a 51-yard score. Roy Vaughn cashed in the two-point conversion.

Davionta Faulkner got an interception and returned it 32 yards, putting the Hawks in business at the Braves’ 23 with just three seconds left until intermission. King threw to Rahmel Campbell over the middle in the front of the end zone for a touchdown. The try-for-two failed. It was 28-0 at the halfway point.

The two teams swapped interceptions to open the second half. Holly High’s Antonio Evans ran his back 47 yards to the Tishomingo County 3. King scored from the 1 on a quarterback keeper. Alhalemi added the extra point for a 35-0 margin.

The Hawks would get two more touchdowns – both on runs by Lumpkin, one covering 57 yards late in the third and another for 47 yards midway through the fourth. Neither conversion try was successful.

Vaughn led the defense with 10 assists and three solo tackles.

“Water Valley is a good football team – solid up front,” coach Donald Deans said. “We have to play well. Everybody has to do their jobs in order for us to be successful.”