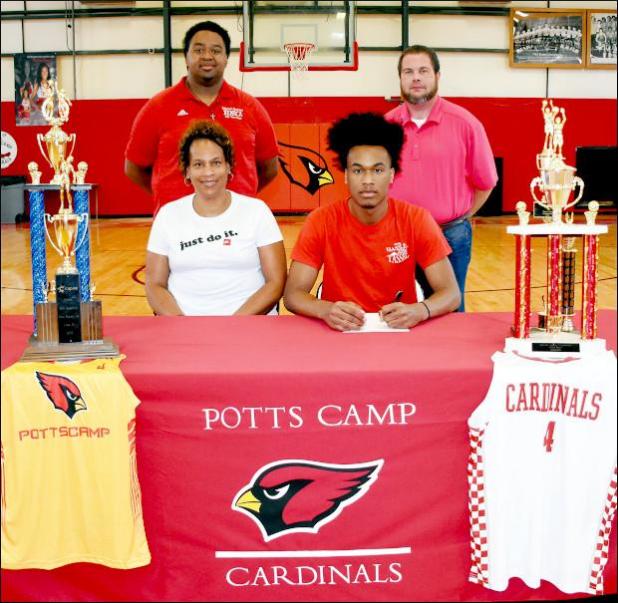 He went from 6 feet tall as a freshman at Potts Camp, to 6 feet 5 inches his sophomore year and then completed his senior season at 6 feet 8 inches.

"Once I started growing, I focused on basketball," he said.

That focus has paid off. Hamilton recently signed a scholarship to play for the Itawamba Community College Indians.

"He was constantly growing," said Jeremy Dillard, who began coaching the Cards when Hamilton was a sophomore. "He didn't get to play a lot at first, but we had a lot of conversations about his potential.

"At the end of his sophomore year, he was really working hard, and I talked to him and told him that basically he could be a monster.

"And in his junior and senior years, he proved it."

In 2018-2019, the Cardinals made their first trip to the state tournament in Jackson since 2005 and lost in the final four. This past season, they finished second in Class 2A.

Hamilton was a key ingredient in the success. As a senior, he averaged 14.2 points, 12.3 rebounds and 4.7 blocks per game.

"He's a versatile player with a real soft shooting touch," Dillard said. "That's what makes him so dangerous."

In the summer between Hamilton's sophomore and junior years, Potts Camp played summer league games at ICC in Fulton.

"The coaches (from ICC) noticed when he made several threes and blocked several shots," Dillard said. "Then they stayed in contact with him and were the first to offer him a scholarship.

And Hamilton agreed. "ICC has stuck with me," he said. "I feel really good about my decision. I look forward to playing there and continuing my education. "It's a blessing. A lot of people don't get the opportunity to play sports after high school." Hamilton said he appreciated Dillard for "encouraging me and making me work hard."

"I started gaining more confidence between my 10thand 11th-grade years and then became very confident as an 11th-grader," he said. "I worked on my weaknesses and they became my strengths in the 12th grade."

The two straight trips to state were special, he said.

"It meant a lot my junior year to be the first team to make it to the state tournament in Jackson since 2005; and then to go to the championship game the next year, that was a great feeling," Hamilton said.