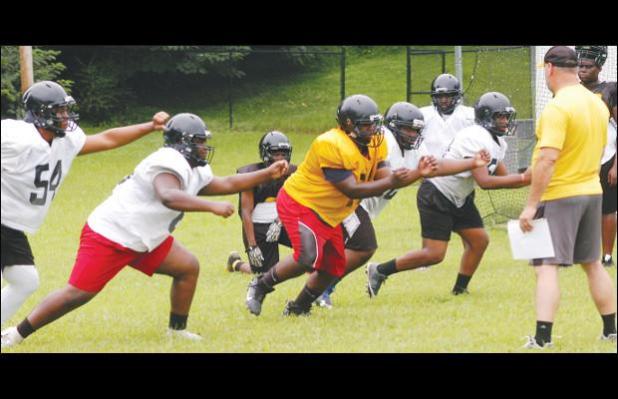 Kickoff is just around the corner.

Three Marshall County teams will play in football jamborees this weekend, while all five will start the regular season the following Friday night, Aug. 23. “Everybody has bought in, and we’re ready to complete the mission,” said John Danley, head coach at Byhalia High School.

His Indians have experienced the playoffs. The goal is higher.

“We want to win a state championship,” said Danley, whose Indians go down from Class 4A to 3A this season. “But, hey, we will be in one of the most competitive leagues in North Mississippi,” he said. “Our district is tough.” It includes defending state champion Water Valley, plus North Panola, Senatobia, Independence and Holly Springs. The Indians will not play in a jamboree. They begin the 2019 campaign August 23 at home versus O’Bannon. The non-district slate also includes Manassas (Tenn.), Lewisburg, Wooddale (Tenn.), Center Hill and Gentry. “We’re playing a competitive nonconference schedule, with 4A Gentry, 5A Center Hill and 6A Lewisburg,” Danley said. “That should get us ready for our district.”

He said preseason drills have been going well.

“We had 95 percent participation for summer workouts, which is great,” Danley said. “We’re just fine-tuning execution, and we will be ready to get under the lights August 23.”

“We’re well ahead of where we were last year, but not near where we need to be,” he said.

The Cardinals, who are moving up from 1A to 2A, will host a jamboree this Friday night. They then kick off the season August 23 at home versus Tipton Rosemark (Tenn.).

“We’re looking forward to seeing some live action against another team Friday (in the jamboree),” Anderson said.

“I feel good about this group. The work ethic is good. We just have to go out and win ball games. We need to get wins and turn this thing around – get that winning culture.”

He said he has a solid core group, plus a lot of young, talented players who just need experience. A few basketball players have also joined the football team, he said, which will be “huge for us.”

“We have a lot of positive things going on,” Anderson said.

“We believe we can throw the football more this season to go along with the power running game.”

At H.W. Byers, head coach Chris Daniels said his focus is on getting some freshmen acclimated to high school football.

“Practice is a work in progress,” he said. “We are slowly getting into better shape.

“Our defense is ahead of the offense at this time.”

The Class 1A Lions are not participating in a jamboree. They start the season August 23 at home versus Bluff City (Tenn.).

The Holly Springs High School Hawks will compete in a preseason jamboree this weekend at Oxford. They will face North Pontotoc on Saturday at 1 p.m.

“Practice is going well but can always be better,” coach Sylvester Hemphill said. “What I am looking for as a coach is attention to detail, relentless effort, execution at a high level and physical play.”

The Class 3A Hawks then begin the season August 23 at home versus Northside (Tenn.).

The Marshall Academy Patriots will play in the Lee Academy Varsity Football Jamboree this Friday in Clarksdale. The Patriots will go against Indianola Academy at 4 p.m. and then Lee at 5:20 p.m.

Class 3A private school Marshall kicks off the season August 23 at home versus North Delta.