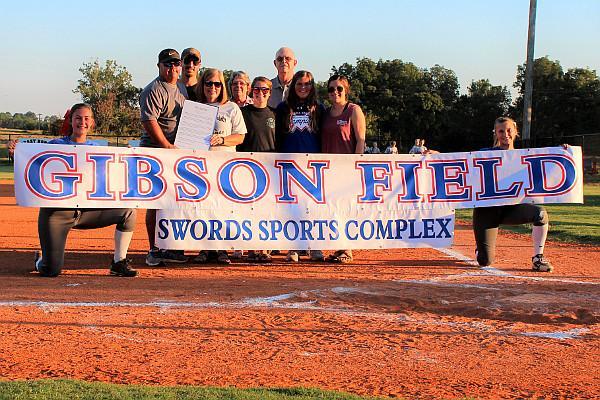 On Tuesday, Sept. 18, the Marshall Academy softball field, which is part of the Swords Sports Complex, was officially named Gibson Field. In front (holding the sign) are MA softball players Carlie Vannucci and Hallie Turner. Members of the Gibson family include (first row, from left) Carlton and LuAnn Gibson, Courtney Gibson Maurey, Darcie Gibson and Casey Gibson Rappa; and (second row, from left) Taylor Maurey, and Jean and Jeff Gibson. “The Marshall Academy family is very appreciative of the hard work and dedication that Carlton and LuAnn have put into the softball program over the years,” said headmaster Barrett Donahoe. “Our new facility is one of the best in our association, and we are pleased that we could honor their family with such a wonderful dedication ceremony.” Carlton and LuAnn Gibson helped launch the program in 2002 and continue to be a vital part of its success with Carlton Gibson serving as head coach. “We were very honored when we were contacted by the board asking if we were OK with them naming the field Gibson Field,” Carlton and LuAnn Gibson said. “We spend the time we do at the field because we love the game and the kids. It has been such a big part of our family. It is an honor to coach softball at Marshall Academy. Thanks to all the parents we have worked with over the years.”