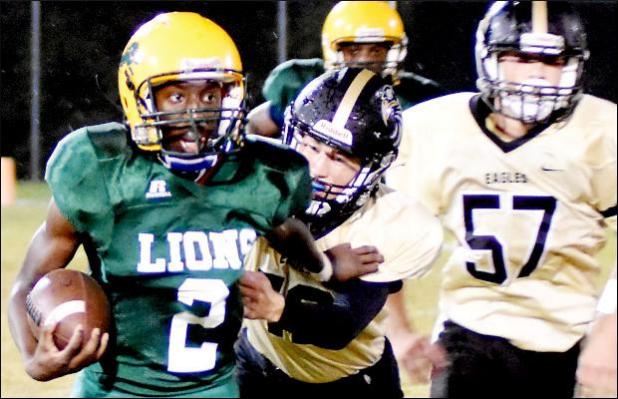 H.W. Byers cut down on the mistakes and in turn lit up the scoreboard Friday night.

The Lions roared to a 506 homecoming win over Falkner. It was their first victory since week one of the season and their first District 1-1A win.

"I thought we played hard the entire game," head coach Chris Daniels said. "We didn't have any turnovers, so we cleared that up. We only had six penalties, and of course, you don't want any, but we will take six over 25 (the number of flags the week before in a loss to Thrasher)." Quarterback Michael

Malik Glover started the scoring with a 38-yard run just two minutes into the game. Vincent Talley carried for the conversion.

Byers added another firstquarter touchdown when James threw short Glover, who broke some tackles along the sideline and raced 60 yards to the endzone. Talley again got the two-pointer. It was 16-0.

The Lions scored three times in the second. The James to Glover connection struck again, this time resulting in a 25-yard touchdown. The try-for-two failed.

With 9:11 left in the first half, James got loose for an 85yard sprint to the endzone. Jabari Wright cashed in the conversion.

The Eagles picked up their only score on a short run with 6:06 to go in the third.

The Byers defense had a big hand in the Lions' last two touchdowns of the game.

Wright picked off a pass and returned in 75 yards for six. The conversion attempt was not successful.

Moore's interception and long return set up the final score. James ran 19 yards for the touchdown, and the tryfor-two failed.

Glover finished with six carries for 60 yards and a touchdown, and he had two catches for 85 yards and two touchdowns.

"We had some lapses. We have to work on tackling.

"And I want to give Falkner credit. They, too, played extremely hard. Their kids never quit."

The Lions (2-3 overall and 1-2 in the district) close the season with four straight district games on the road, starting this Friday night at Myrtle.

"It's good to get this win and get things going in the right direction," Daniels said. "These next four games are going to dictate our season. We want to try to make a playoff run. We need to just buckle up our chinstraps, focus on fundamentals and go play good football."

After Myrtle, Byers goes to Baldwyn, Biggersville and Ashland.