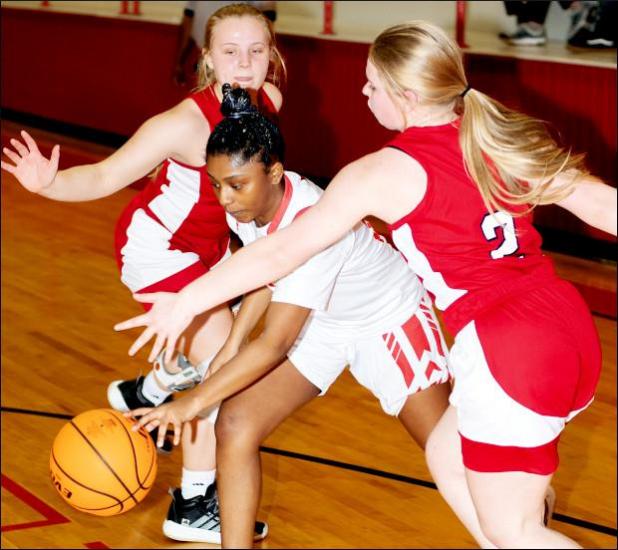 Photos by Dillon Day
Chaynce Collins of the Lady Cardinals goes between a couple of Strayhorn defenders.

Deandra Walker (4) puts up a one-handed shot in the lane.

The Potts Camp Lady Cardinals tipped off the 2021 portion of their season with a pair of dominant wins.

The Lady Cardinals rolled past Tremont by 23 points and then stayed on cruise control for a 30-point win over Strayhorn to start Region 1-2A play.

Coach Stephen Deaton’s team picked up a non-district victory on Monday of last week at home ­ 53-30 over Tremont.

The Potts Camp girls, after a long holiday layoff, stormed out of the starting gate for an 18-8 lead after the opening quarter.

Chaynce Collins nailed a couple of threes in the first eight minutes, and Delaynie Odom scored seven points in the early going, including a long-range shot. They led the Lady Eagles 33-16 at the half and 44-24 after three quarters before winning by 23 points.

Malasha Faulkner, who was nine of 15 from the freethrow stripe, led the Lady Cards with 19 points.

Collins and Odom were close behind with 16 each.

The story was much the same in a 48-18 win over Strayhorn Friday night at home.

Potts Camp came out of the starting gate red hot, going up 19-2 after the opening eight minutes of the contest. Faulkner blistered the nets for 11 firstquarter points.

The dominance continued as the Lady Cardinals led 31-8 at halftime and 42-16 at the end of the third quarter.

Faulkner was the top gun with 19 points. Odom was close behind with 17, nine of those coming in the third. Cayla Loftin added 10.

Cardinals The Potts Camp boys split their games last week, also tipping off district competition with a victory. They opened the 2021 portion of their schedule with a 62-28 setback to Tremont.

They fell behind 19-2 after the opening quarter and were down 42-12 at intermission.

Top scorers for the Cardinals were Britten Traylor and Quintavious Martin with seven each.

Then coach Rashad Shannon’s squad bounced back strongly Friday night at home with a big 69-47 win over district opponent Strayhorn.

It was a tight match-up in the first half. The Cards were up 12-9 at the end of the first period and 27-21 at intermission.

Traylor scored eight in the third and Josh Blake added six as the offense really started clicking. Potts Camp outscored the Mustangs 22-14 in the third to take a 14-point lead to the fourth.

They kept the momentum in the fourth and won by 22.

Hitting in double digits were Blake with 16 and Traylor with 11. T.J. Jackson had nine.

The Lady Cardinals (4-11) and Cardinals (5-7) hosted district opponent Walnut on Tuesday of this week. They go to Mantachie this Friday for district contests.