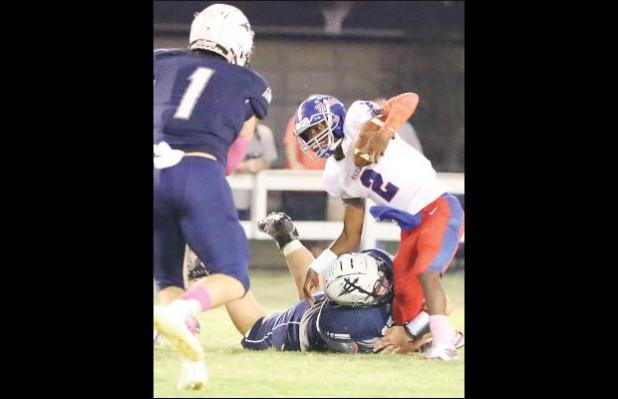 MA quarterback Jeremiah Jones (2) tries to escape from the grasp of a Tunica player.

Friday night, they went out and got the job done, dominating Tunica Academy 42-6 for the District 1-3A crown.

“It was just something for the guys – for motivation,” coach Barrett Donahoe said. “We used it with the junior high team (which also won a district title last week) and the varsity. It was a big week.”

Philip Parks led the offense with 14 carries for 238 yards and five touchdowns. Will Merrell led the defense with eight and a half tackles.

MA still has three non-district opponents left in the regular season. With the win over the Blue Devils, the Patriots secured a top-four seed in the playoffs and a firstround bye.

“For this group of guys to come together and win that district championship, it’s special,” Donahoe said. “We just have to keep getting better. We have some big opportunities ahead of us.”

Marshall marched for points on its opening possession Friday night in Tunica. Jeremiah Jones threw to Philip Parks and Anthony Mayfield for a pair of first downs. Parks ran 12 yards for the touchdown. Landon Houston cashed in the twopoint conversion.

Late in the first, the Patriots faced a fourth and goal at the Tunica 6. Jones ran the option to perfection, pitching the ball at the last second to Parks, who scored. Atry-for-two failed. It was 14-0.

Tunica went for the first on a fourth and 10 early in the second quarter, but Merrell sacked the quarterback for an 8-yard loss.

The Blue Devils, via a 26-yard run, managed to get on the scoreboard with 1:13 remaining in the half.

Then the Patriots stunned Tunica before the break. Jones went back to pass, scrambled, made a cut, picked up some key blocks and darted 51 yards for a touchdown with three seconds on the clock. They added the two-pointer on a halfback pass from Parks to Rusty Bolden.

“That was huge,” Donahoe said about his team going up 22-6 at halftime. “It was demoralizing for Tunica. Jeremiah (Jones) made a great run and got some great downfield blocking.”

Midway through the third, Parks got loose again, this time for 40 yards and a score.

He tacked on two more third-quarter touchdown bursts, one for 64 yards and another covering 57 yards. Jones kept for the conversion after the final touchdown. It was 42-6.

Because of the 36-point margin, the clock ran non-stop the last 1:23 of the third quarter and all the fourth.

The Patriots, 3-0 to wrap up district play, improved to 4-2 overall.

Other leading tacklers were Bolden with five and a half, Taylor Cox with four and Jack Smith with three and a half. Bolden and Smith each recovered a fumble.

The Patriots travel to Class 5A Magnolia Heights this week for a Thursday night game. The Chiefs are 5-2, coming off a 31-13 win over North Delta.

“These last three games give us an opportunity to pick up some power points (as related to the playoffs),” Donahoe said. “We have a chance down the stretch to put ourselves in a better position than the four seed.

“Magnolia Heights will be a huge challenge for our football team – a different environment for our guys.

“But we have to go in with the attitude that we can pull off the upset.”