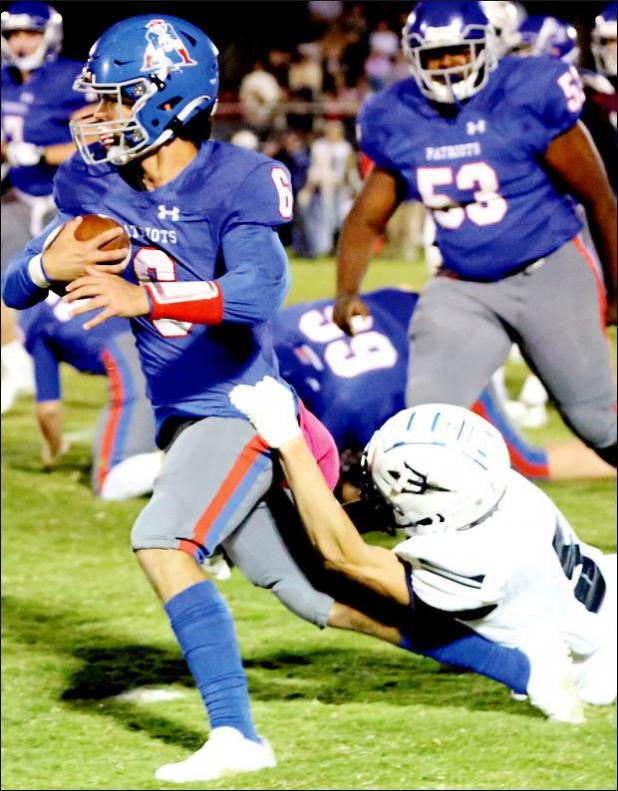 Photo by Theresa Bolden Devore
Jimmy Morales (6) tries to escape the grasp of a Tunica player.

It took every bit of a three-hour high school football game for Marshall Academy to seal the deal Friday night.

Clinging to a seven-point lead at about 10 p.m., Colton Neal intercepted a pass and scored on the last play. That wrapped up a 25-12 homecoming win over Tunica Academy.

The Patriots also captured the District 1-3A championship, with a 3-0 mark, and will get a firstround bye in the playoffs, which start October 30. They will host a game in week two, November 6.

Once again, as has held true all season, the defense was up to the task and more.

“I can’t say enough about our defense,” he said. “We shut their best plays down, the sweep and the trap, and made them have to go to something else.”

After Marshall took a 13-0 lead in the third, the Blue Devils switched to a spread offense.

“We had no idea they would do that,” Banks said. “We forced them to do something they were not used to doing. But we responded with three picks”

All the interceptions came in the fourth, the first by Landon Houston which set up a Patriot score, the next by Rod Moore on a third and 26, and the other by Neal, which he returned 53 yards for a touchdown.

“We went to a three-man front with a linebacker rushing, too,” Banks said. “We were getting good pressure on the quarterback.”

The Patriots went up 7-0 early in the second quarter. Jack Smith capped a 51-yard drive with a 10-yard run to the corner of the end zone. Keaton Morgan kicked the extra point.

That score held until halftime. Tunica had just two first downs in the first half.

“Like I said, our defense played well,” Banks said. “They (the Blue Devils) were bigger than us up front, but our guys haven’t backed down all year, no matter how big they are.”

Punter Jimmy Morales pinned Tunica deep in its own territory early in the third quarter. Nic Henry hit the Blue Devil ball-carrier for a 5yard loss on third down, forcing a punt from the end zone. Marshall took over at the Tunica 33 and scored in just three plays. Houston had a 28yard burst to the 5. Henry scored on a 1-yard carry. The extra-point try was blocked. MA was up 13-0 with 7:23 to go in the third.

That’s when the Devils surprised the Pats with a passing attack. They used a big pass play to convert on a third and 18, picked up another first via the air and then scored on a 23-yard quarterback keeper. A pass try for the conversion fell incomplete.

Late in the third, the Patriot defense stopped the Devils on a fourth-and-eight try.

The MA offense ran the clock with a seven-play drive but couldn’t convert on a fourth-and-one.

The Patriots got the ball back, with Houston’s pick. He returned it 25 yards to the Tunica 15. Smith carried three straight times, the last one going 3 yards for six points. A two-point attempt failed. The

The Blue Devils struck back with a quick score. Facing fourth and two, they got a 52-yard pass play for the touchdown. A try for two was not successful.

The MA defense continued to respond, getting a stop on fourth and three and then Moore’s interception.

The Patriots were forced to punt with less than 25 seconds remaining. On third down, Neal’s pick and points were followed by the district title celebration.

“Mistakes hurt us a lot,” Banks said. “We continue to have too many penalties. Being in like a second and 5 and then going to a second a 15, that hurt us.

“Our kids are aggressive. They play hard and sometimes they play through the plays when they shouldn’t. We have to get a little more disciplined.

Ethan Helton led the defense with six tackles and a sack. Neal had five tackles.

The Patriots (5-2 overall) will host Magnolia Heights on Thursday night this week. The Class 5A Chiefs are 4-3 on the season, coming off a 38-28 loss to North Delta.