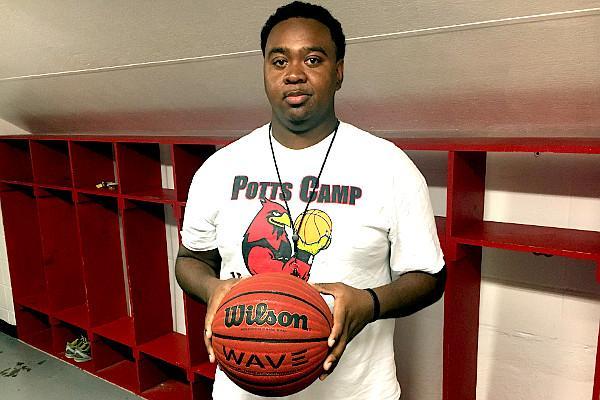 Photo by Barry Burleson
Jeremy Dillard, a 2010 graduate of Potts Camp, is the new head boys basketball coach at the school.

Dillard back home to coach Cardinals

Don’t tell Jeremy Dillard he’s too young to be a head basketball coach at the high school level.

“I know there’s pressure as a young coach,” he said. “But I always carry a chip on my shoulder. I know some people feel like an older guy would maybe do better. I will carry that challenge with me, and every day I will give it 150 percent.”

The 25-year-old is returning to Potts Camp, his alma mater, to lead the Cardinals. He is a 2010 graduate of the school. He went on to get his degree in secondary education (social studies) at Ole Miss.

“I don’t feel these kids have enough pride in their school,” he said. “I want them to bleed red and white (the school colors).

“We have to build team chemistry. That’s huge. A family, that’s what we have to be.”

But his heart is in Potts Camp. That’s where he attended school from kindergarten through 12th grade. He grew up in the Bethlehem community, the son of Steven Sr. and Nancy Dillard. And he’s building a new house there, settling back home with his wife Latrice and their 4-year-old son Jayden.

He grew up in the Bethlehem community, the son of Steven Sr. and Nancy Dillard. And he’s building a new house there, settling back home with his wife Latrice and their 4-year-old son Jayden.

His mother, he said, has always emphasized academics first, and he will do the same with his players.

Dillard was playing on the junior varsity basketball team in the 10th grade when his progress report showed a drop in his math grade from an A to a B.

“My mother took me off the team, right when my coach was ready to move me to the varsity,” he said. “She took the one thing I loved the most away from me.

“But she did not want my grades to slip. Academics have always been a big thing in my family.”

Dillard did not return to the court for his junior and senior years of high school.

“I was the manager for about every sport here (at Potts Camp),” he said. “I was involved in all athletics. I was a statkeeper. I’ve always loved statistics.

“I also filled a lot of leadership roles (at school) after that. I was involved in just about every club on campus.”

He deeply appreciates the love and support of his parents.

“My mother and father are my super fans,” he said. “They support me in everything I do. They’re wonderful. My parents have always had my back.

“My mom told me, ‘You can go away and come back but don’t get stuck.’”

Because of that upbringing, he will push his players to keep their grades up, to participate in other sports and to get involved in other extra-curricular activities at school. He will also coach track, be the head junior high football coach and assist some with varsity football.

“I want to help the kids in my hometown,” he said. “They can see I made it, and hopefully they will make it, too. All I want to do is what is best for the kids. And I want to create a family-based atmosphere with them.”

He has been very busy working with his team in June. He said the 2017-2018 Cardinals will be very young – one senior, four juniors and the rest sophomores and freshmen.

“Our focus this summer has been on us – growing together,” Dillard said. “I want them to become better individually – physically and mentally – and in turn we will focus on growing together and building team chemistry. That’s huge. And I want the kids to know that I’m here for them and support them in everything I do.”

Potts Camp is moving down from Class 2A to Class 1A for the next two school years, but that doesn’t make it any easier. The district opponents will include Ashland, Falkner, H.W. Byers, Hickory Flat, Myrtle and West Union.

“Those are all very talented teams,” he said. “Nothing will come easy for us. And that’s OK. I want my guys to be tested.”

Dillard said he first thought about majoring in political science at college and getting involved in politics.

“But I changed to education,” he said. “That’s because I’ve always loved kids, and I want to help kids.”

Many members of his new Potts Camp High School team played for him on a traveling basketball squad a few years ago.

“So, I am coming back home to a school and a group of players that I’m very familiar with,” Dillard said. “It’s exciting. I know there are some naysayers, because of my age, but I know this – nobody will outwork me.”