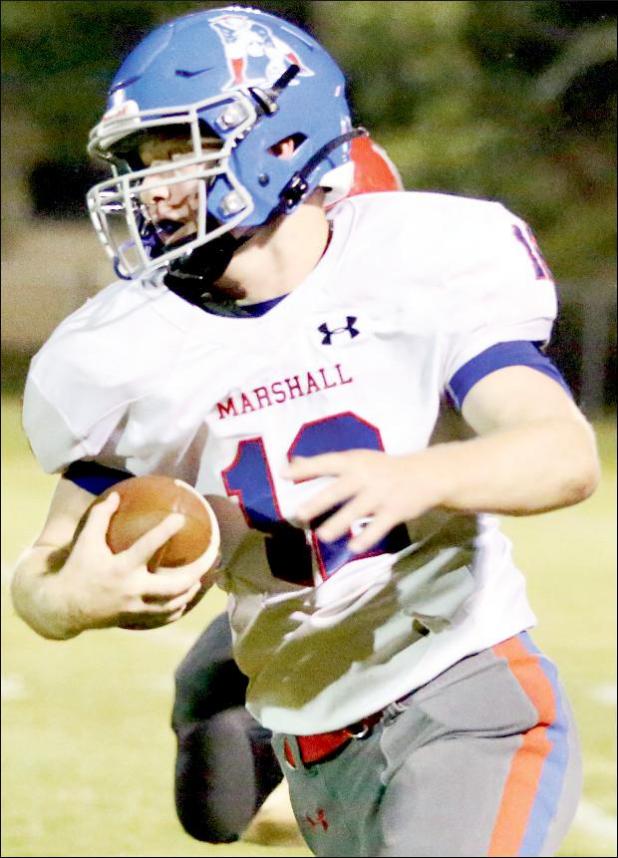 Marshall Academy turned to its bread and butter after somewhat of a rocky start Friday night on the road.

A solid running attack and dominant defense turned the tide as the Patriots rallied for a 32-14 District 1-3A win over Oak Hill Academy.

“We made some mistakes early in the game,” coach Tony Banks said.

“Then we went to our power set, and ran the football and ran it very well. And the defense played lights out.”

The Patriots muffed a punt later in the first, giving Oak Hill the ball at the MA 33. On second and goal from the 6 the Marshall defense got its first big stop of the evening, forcing a fumble that was recovered by Rod Moore.

A couple of series later, the Raiders got on the scoreboard when Jamarcus Loyd picked off a pass and returned it 19 yards for a touchdown. Marshall fumbled the ball

away two plays into its next drive, and Oak Hill took over at its own 46. Cameron Dill got the six points on a 16-yard carry. The home team added a two-point conversion for a 14-7 lead with 30 seconds left in the first.

In the second quarter, Winston Fant of MA halted Oak Hill’s fake punt try, giving the Patriots possession at the Raider 24. Three plays later Landon Houston plunged into the end zone from 1 yard out. The extra-point try was blocked. MA trailed by one with 7:22 left in the second quarter.

The Patriot defense stopped Oak Hill on a fourth and 1. On the very next play, Houston traveled 37 yards for the goahead score. A two-point try failed. MA led 19-14 and never trailed again.

The Patriot offense put together a successful 81-yard drive to close the first half. Most of the yardage came on the ground, but quarterback Walker Sanders threw to Rusty Bolden for the 20-yard touchdown. The pass attempt for the two fell incomplete. MA was up 25-14 at intermission.

The defense kept standing tall to start the second half.

Oak Hill drove inside the Marshall 1. Ethan Helton and Smith combined for a tackle for loss, and then Bolden came up with a touchdown-saving tackle.

Marshall couldn’t move the ball and quick-kicked from its own end zone. Oak Hill took over at the MA 20. The Raiders reached the 6, and then a pass try on fourth and goal was broken up by Bolden.

“We stopped them on the one-foot line, and then after the quick kick on third down, we held them again,” Banks said. “It was complete domination by our defense, particularly the second half.”

The Patriot offense iced the victory with 5:28 left in the game. Smith scored on a 3-yard run. Morgan’s kick provided the 28-point margin.

“Our offensive line did a great job, and we had some guys running the football really hard,” Banks said. “We got into our running sets, gaining 4 and 5 yards a pop, and then late in the game that turned into 10 and 12 yards a pop.”

“Defensively, we took away their short passing game because of so much penetration.” Houston carried 11 times for 112 yards and Smith eight times for 54 yards. Jimmy Morales ran four times for 50 yards.

Colton Neal had five solo tackles and seven assists to lead the defense. Jamarius Rooks had one solo and five assists. Other top tacklers were Helton, Nick Henry, Moore, Smith, Bolden and Will Merrill.

“I’m really proud of our guys,” Banks said. “We faced adversity early on, and that’s going to happen in football, but we responded well.”

MA (4-2 overall and 2-0 in the district) will host Tunica Academy this Friday night with the district championship on the line. “I like the situation we’re in — a chance to win the conference at home,” Banks said. “But it’s going to be a challenge. Tunica is big up front; they like power football.”