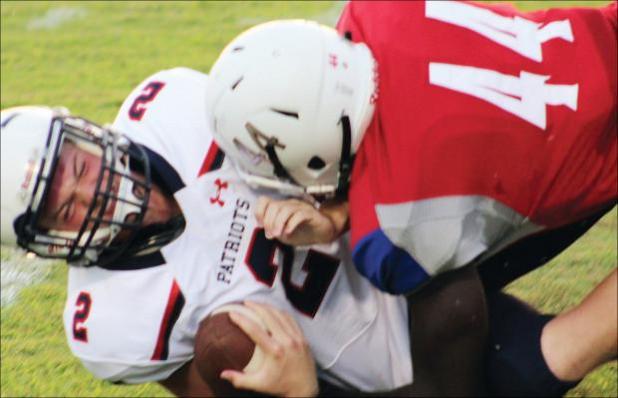 Just 13 miles separate Byhalia and Lewisburg, the first in Marshall County and the other in DeSoto. But the size of the schools is a much wider gap.

Friday night, the 3A Indians knocked off the 6A Patriots 20-10 in the Northcentral Bowl and improved to 3-0 to start the season.

“It was a big game,” said head coach John Danley. “It’s been a few years since we’ve played them, and the turnout was crazy.

“Our guys have worked their tails off to get to this point, and we still haven’t played our best game. I would give us a 7 (on a scale of 1 to 10). We haven’t scratched the surface of how good we can be.”

The Byhalia defense, led by Jamal Pye, gave the home team the momentum from the get-go. It stopped Lewisburg on its opening possession.

“Jamal was the player of the game,” Danley said. “He really brought the intensity. I can’t even count how many tackles he had. He set the tone from the beginning of the game.”

Then the Indians scored on their first play from scrimmage, a 75-yard pass from De-Quan Moore to Jacoreion Crockett.

“It’s really what we call our first-down play,” Danley said. “We got one-on-one coverage on Crockett, and he pulled the football in with one hand, shook off a defender and went to the end zone. It was a really big play. It was huge.”

The Patriots’ Tanner Gillis kicked a 39-yard field goal with 5:56 remaining in the second quarter to cut the deficit to 6-3.

Three minutes later, Moore threw to Terrance Davis for an 18-yard touchdown. The Indians were up 12-3 at halftime.

Lewisburg got its only touchdown of the night with 10:46 left. Jason Hoffman ran 35 yards to the end zone. Gillis hit the extra point.

It was the first time the Byhalia defense had been scored on in the first three games.

“This defense is special,” Danley said. “We knew Lewisburg wanted to run the football, and we had to stop it, and for the biggest part of the night, we did.”

Crockett had two interceptions in the win.

Danley said he was a little disappointed in the Indians’ running game versus the Patriots.

“We didn’t run the ball particularly well,” Danley said. “They did a lot of slanting and twisting on defense and it confused our blocking schemes.

“We have to work on that because we might run across that again on down the road.”

Next up the Indians host Wooddale (Tenn.) this Friday night. It is their fourth straight home game to start the season. The Cardinals are 2-1, coming off a 33-0 win over Raleigh-Egypt (Tenn.) last week.