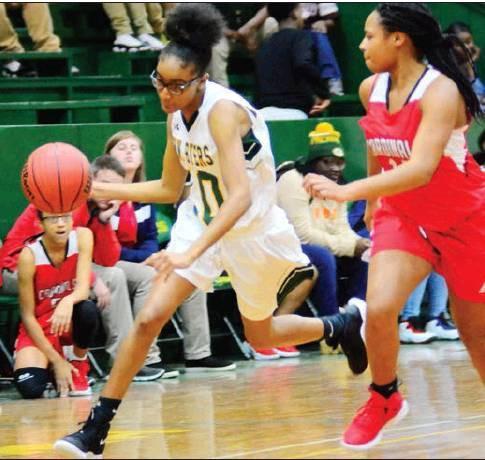 They knocked off Marshall County rival Potts Camp 62-46 Tuesday, Dec. 18, at home for their first win of the season.

Jakorien Hubbard was the star of the show for the Lady Lions. She poured in a gamehigh 31 points, including 12 of 14 from the free-throw stripe.

“She is a phenomenal young lady both on and off the court,” Casabella said about Hubbard. “She hustles hard and does well to keep her composure under pressure, and to top it off she’s extremely humble about it. I’m extremely proud of her and the example she sets for her teammates.”

Anteyonna Williams provided the firepower for the Lady Lions to start the second. She hit a pair of threes from the corner. Their lead was 17-11 at the 7:12 mark.

But the Lady Cardinals fought back. Chanyce Collins’ bucket in the lane put them up 21-20 with 1:50 to go until intermission.

Potts Camp’s Mackenzie Brownlee capped the first half with a steal and lay-up, and the visitors led 25-23.

Byers went up 27-25, on Keyonna Washington’s basket with 6:13 left in the third, and never trailed again.

Williams also scored in double digits for Byers as she had

Top scorers for the Lady Cards were Anderson with 20 and Brenya Muse and Brownlee with eight each.

Coach Casabella is looking forward to the second half of the season.

“Back in October, the girls and I discussed that our motto for the season was going to be ‘Deserve Victory,’ and what that meant to us,” she said.

“We’ve had to start small with victories within the game – go out and win the first two minutes; OK, now the first five, a quarter, a half, and we finally got the game. I hold the girls to high expectations and have tried to instill grit and resiliency in them. They’ve worked hard and they earned it. I’m excited to see that momentum carry into the New Year.”

The Potts Camp Cardinals never trailed on their way to a 58-45 win over Byers in the second game of the night.

Their largest lead of the first quarter came with eight seconds left. Kedavian Faulkner drove to the hoop for two, and it was 17-7.

Byers’ cut the deficit to five on Malik Glover’s bucket with 6:11 to go in the second.

The Cardinals grabbed the momentum big-time late in the third and early in the fourth as Martavious Frost dunked twice on fast breaks and Mitchell Saulsberry once.

Saulsberry was the leading scorer for Potts Camp. He had

For the Lions, Kaderrius Rhyan had 13 and Glover 10.

“It was a nice win over a very talented Byers basketball team,” said Jeremy Dillard, head coach of the Cardinals. “We have been fighting illness the past three weeks. We were happy to finally have everyone back.

“When our team is whole, we play with a lot of energy, and I think that showed against Byers. We will use this as a springboard. January is the month when games really start to count. We will take these two weeks preparing for the grind that will come in January.”