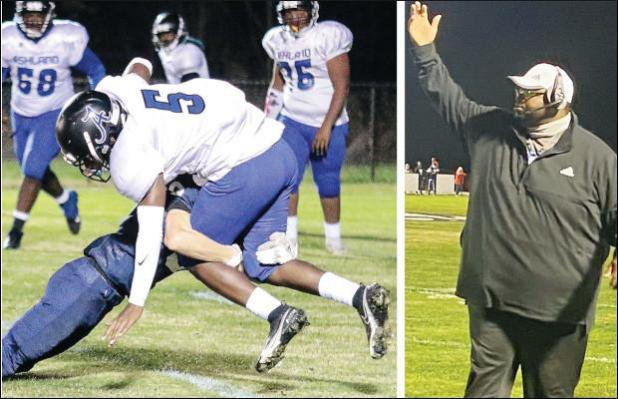 The result was self-explanatory when Ashland visited Tupelo Christian Preparatory School Friday night in the first round of the Class 1A state football playoffs.

“It was what it was,” coach Christopher Suggs said about his Blue Devils’ 62-0 loss. “They just had more gas in their engine. We didn’t have enough.”

The upstart Devils, in their first ever postseason appearance, were no match for the heavily-favored and seasoned Eagles.

“I saw they had like 18 seniors, and I thought, `wow,’ sometimes that’s a whole roster in Class 1A,” said Suggs, with a complete roster of 22.

Jamyson Griffin ran 13 yards, and then the Devils picked up another first down. But a penalty and a couple of negative plays forced a punt.

“We recovered a fumble in their territory and looked ready to go, but we lost traction,” Suggs said. “Things did not work in our favor from that point on.”

Khi Holiday got the home team on the scoreboard with a 56-yard run.

Then the TCPS defense got two straight pick sixes, one by Reed Alred and another by Josh Berry. It was 21-0 with 7:43 left in the first quarter.

“It just felt like it was going to be a long night,” Suggs said.

The Eagles surged ahead 48-0 at halftime. Their other first-half touchdowns came on pass plays — Holiday to John Paul Yates for 13 yards, to John Avery Herrod for 15 yards, to Noah Foster for 35 yards and to Yates again for 8 yards.

The Devils’ best drive of the first half reached the TCPS 37. The big play was a 21-yard pass from Emit Bell to Kenneth Morgan.

At the 7:36 mark of the third, the Ashland defense forced a fourth and eight, but Holiday struck again, this time a 26-yard touchdown pass to Baylor King.

The Eagles’ last score came with 37 seconds left in the game, a 7-yard run by Carter Smith.

The Blue Devils end their season at 5-6. TCPS, at 8-2, moves on to face Biggersville in the next round. Suggs, in his third season,

said this team, with seven seniors, helped tremendously in building a program.

“I can walk down the hall now and have kids tell me, `Coach, I’m playing next year.’ “We’re trying to build a program, and it’s our goal next year to get back to this point and go further. We want it to be expected — not a surprise.” Suggs said through all the adversity of the 2020 season, with the COVID pandemic, being able to complete a season says a lot about his players.

“Sure, it feels bad to lose like we did Friday night, but we know we just didn’t have what we needed to compete well against that team — not yet anyway.”