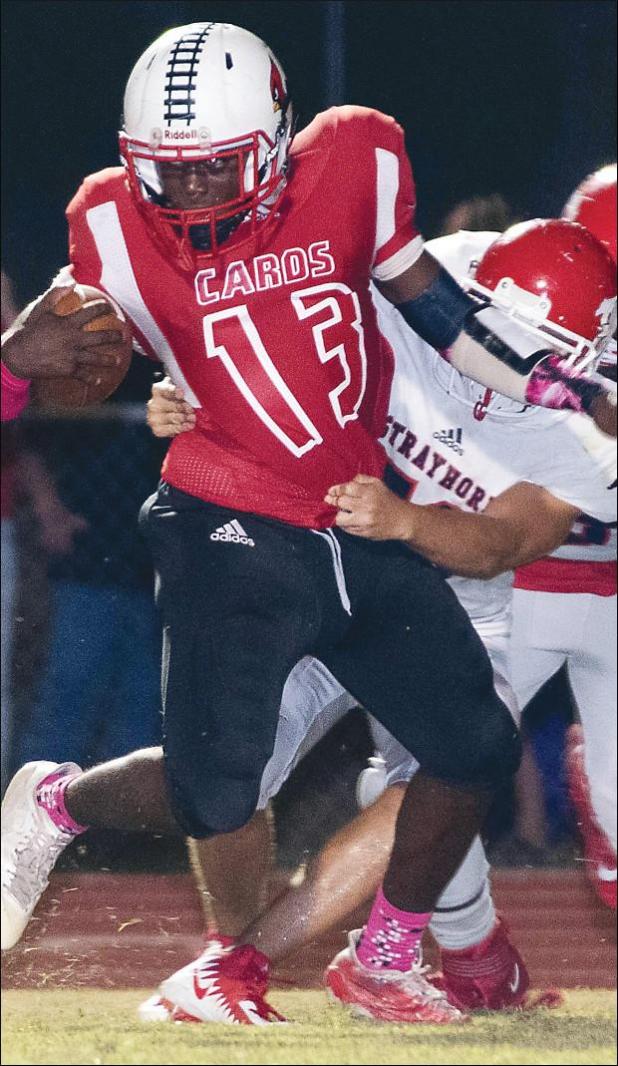 Photo by Dillon Day
Potts Camp quarterback Josh Blake (13) is tugged from behind by a Mustang Friday night during the Cards’ homecoming game.

Potts Camp rallied Friday night in the second half for a win in its district opener.

Trailing by seven at intermission, the Cardinals got a pair of touchdown passes in the third quarter and knocked off Strayhorn 15-7.

“We were able to pull it out,” coach Darrow Anderson said. “We didn’t quit, and I’m proud of that. I thought we dominated physically in the third and fourth quarters.”

The Mustangs went up 7-0 in the first on a 28-yard pass play and added the extra point.

“We gave up that long touchdown and made some adjustments after that,” Anderson said. “They didn’t move the ball much on us the rest of the night.”

The Cardinals’ first touchdown in the third came on a 33-yard toss from Josh Blake to Ryan Baldwin. Noe Hernandez kicked the extra point.

Then Blake and Markeio Raimey hooked up for an 80-yard touchdown pass play.

“We struggled early offensively,” coach Darrow Anderson said. “In the second half, we were able to get the running game going, and that helped us hit some big plays in the passing game.

Meanwhile, the defense turned in a “big night,” he said, which included creating several Strayhorn turnovers.

Next up for the Cardinals (4-3 overall) is another District 1-2A match-up, this one at Mantachie. The Mustangs fell 54-29 last Friday to East Union.

“It’s another big game this week,” Anderson said. “If we win, we can secure a playoff spot. I thought we played good and played hard last week against Strayhorn. But we have some things we need to fix in order to continue to be successful.”

After Mantachie, Potts Camp has district games versus Walnut at home and East Union away.