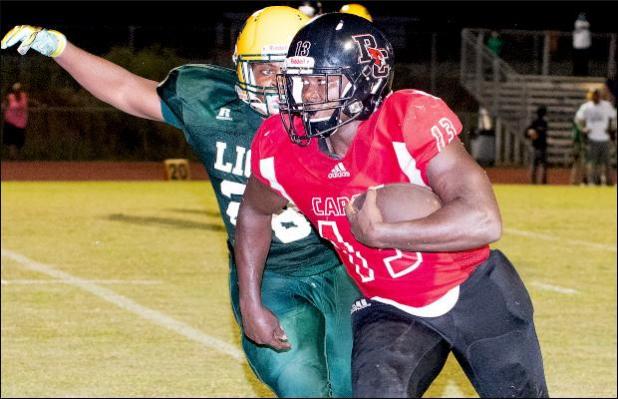 Cards pull away from Lions

It was a rough start for Potts Camp Friday night.

Then the Cardinals scored 27 second-quarter points on their way to a 48-14 win over cross county rival H.W. Byers.

“We fought through adversity, settled down and got back to playing football,” coach Darrow Anderson said. “We had some stupid mistakes early. But give credit to Byers. They played hard and really got after us.”

Potts Camp actually took the lead on its first possession. Quarterback Josh Blake kept and sprinted down the right side for a 43-yard score. Noe Hernandez nailed the extrapoint kick.

The Cards got the ball back on an interception by Tucker Owings at the Potts Camp 19.

Then on the very next play a high snap sailed over the head of Blake back to the endzone, and the Lions got a safety.

Byers put together a long drive on its ensuing possession but it ended with a fumble, recovered by Blake.

The Cards, on a third and 4, fumbled the ball back to the Lions. Devin Moore recovered at the Potts Camp 26.

The Lions converted a fourth and 11 on a pass from Michael James to Vincent Talley. Two plays later, James tossed short to Jabarri Wright, who made a quick cut down the sideline to complete a 15yard touchdown play. A try-fortwo failed. Byers led 8-7.

That score held until the end of the opening period.

In the first minute of the second, Blake recovered a Byers fumble in the end zone for six points. Hernandez added the kick. Potts Camp was up 14-8 and never trailed again.

Blake picked off a pass to end Byers’ next try for points.

The Cardinals went 45 yards in five plays. Jordan Lebo scored on a 7-yard run up the middle. Hernandez’s kick made it 21-8.

The Lions did not go away easily. James threw a quick toss to Moore who got loose and sped 59 yards to the end zone. A pass try for the conversion fell incomplete.

Potts Camp tallied two more touchdowns prior to the half to go up 34-14.

Dakota Moore and Blake got those ­ both from inside the 10. The second TD was set up by Jaquavian Bell’s fumble recovery at the Byers 16.

“We were up at the end of the first quarter, and the wheels fell off,” said Chris Daniels, head coach of the Lions. “The bleeding started and we couldn’t stop it.”

The Lions opened the third with another turnover. Peyton Aldridge got the pick for Potts Camp.

Blake scored again, this time on a 23-yard keeper, and Hernandez’s kick was good.

The Cards’ final touchdown of the evening came with 6:38 to go in the third. Blake threw to an all-alone Aldridge for the 33-yard score. Hernandez added the kick.

The clock ran non-stop to wrap up the third and throughout the fourth.

Blake had a monster game for Potts Camp. He carried 12 times for 156 yards and three touchdowns. He was two of three passing for 50 yards and a score. On defense, he had a fumble recovery for a touchdown and an interception.

Leading the Cardinals’ defense were Jeffrey Moore with seven solos, two assists and a tackle for loss and Owings with five solos and two assists.

Potts Camp had four interceptions and four fumble recoveries. Others were Brayden Clifton with a pick and Treyion Rooks with a fumble recovery.

“I saw good things out of our team and bad things,” Anderson said. “We have a lot of work to do. We’re still really young. We have to mentally get prepared to start football games and then execute.”

Coach Daniels was frustrated with his Lions’ mistakes. They had 17 penalties and eight turnovers.

“We have a lot to clean up,” he said. “That stuff just can’t be done. Against a team the caliber of Potts Camp, mistakes will get you beat.

“But the truth is, you’re not going to beat anybody with 17 penalties and eight turnovers.” On a bright note, James was 17 of 33 passing for 305 yards and a pair of scores. Talley caught six for 137 yards and Moore four for 93.

Byers played without one of its top players, Malik Glover, due to sickness.

“That hurt us offensively and defensively,” Anderson said.

The Lions (1-1) have an open date before starting Region 1-1A play Friday, Sept. 25, at home versus Coldwater.