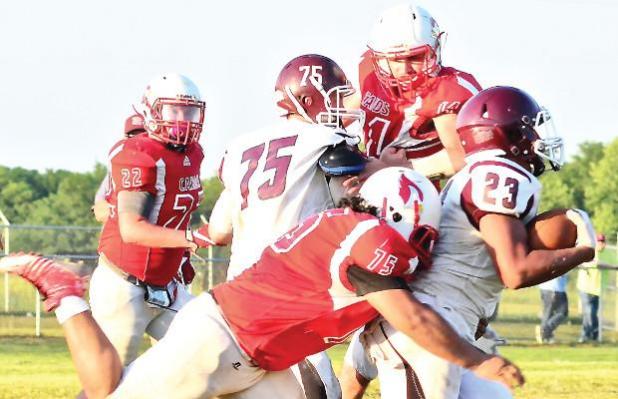 Photo by DeMill Dixon
Noe Hernandez (75) of Potts Camp makes a tackle in the jamboree. Also pursuing are Dakota Moore (22) and Ryan Baldwin (14).

Darrow Anderson was happy overall with the Potts Camp Cardinals’ spring football. And a couple of things really excited the head coach.

Atop the list, a culture change is taking place.

“Our effort has been outstanding,’ he said. “If we miss a tackle, we have constant pursuit. If something doesn’t go our way, we don’t hang our heads. We’re not quitting. Attitude-wise, we’re doing the things we have to do to win games on Friday nights.”

Secondly, the passing attack made solid strides during spring practice and the jamboree. He liked what he saw from quarterback Josh Blake.

“One of the things I’m most excited about is that we’re going to be able to throw the football,” Anderson said. “That’s something we struggled with last year. He was making the short, quick throws and the deep throws.”

Potts Camp wrapped up the spring by traveling to Okolona on May 16 and facing both Biggersville and the host Chieftains.

“I scheduled those teams in the spring because I knew they would challenge us and push us,” Anderson said. “I wanted to see where we are and where we need to get better.

“Biggersville and Okolona combined for over 20 wins last year.”

Potts Camp will field a young team in 2019, and the experience in a jamboree is crucial.

“It’s a big adjustment for some of these young kids starting on the offensive line and at other positions,” Anderson said. “I was disappointed with the running game, particularly the blocking up front. We didn’t get enough push.”

The Cardinals had a scoring drive versus Okolona with the bulk of the yardage coming through the air.

“We’re developing our young kids, and that’s going to pay off on down the road,” he said. “As they get older, experiences like these will make a huge difference.

“We have a good young core group.

“At the end of the day, we really got a lot accomplished in the spring.”

The Cardinals finished 4-7 last season. It was Anderson’s first year at the Marshall County school after winning a state championship at West Memphis Christian (Ark.).

This year Potts Camp will be stepping up in classification, from 1A to 2A.

“It will be bigger schools, bigger competition,” Anderson said. “But at the same time, going against the likes of TCPS, Smithville, Okolona and Biggersville (last season) was tough, too.”

District play starts October 4 when the Cardinals host Strayhorn. The games at Mantachie, at home versus Walnut and at East Union are the last three Fridays of October.

“It’s a tough schedule, but if our young talent keeps developing and we can all get on the same page, I think it will be a good year,” Anderson said.