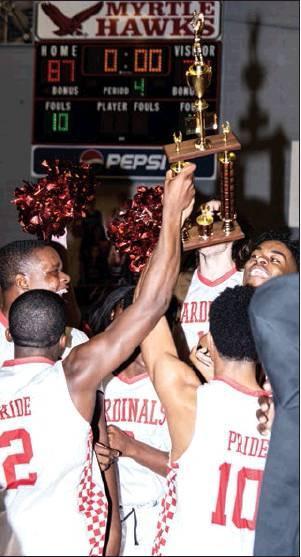 Starting the fourth quarter of the Region 2-1A championship game with only a one-point lead, coach Jeremy Dillard had a message for his Potts Camp team.

“You will win this game with heart, not your skill set,” he told the Cardinals.

They proceeded to outscore West Union 28-16 in the final eight minutes Friday night and claim the firstplace trophy with an 87-74 win.

“They left it all on the floor in the fourth quarter, and we were able to pick up the victory,” Dillard said.

“We were down at halftime (41-36) and the kids worked hard and overcame adversity. Hats off to my team. We continue to get better daily, and I’m extremely proud of these young men.”

Potts Camp outscored the Eagles 23-17 in the third to go ahead 59-58 and then dominated the fourth. The tournament was held at Myrtle.

Michell Saulsberry had 10 of his 25 points in the final period.

Kedavian Faulkner added 22 points for the Cards, 11 of those coming in the third.

Other top scorers in the balanced scoring attack were Kylan Conners with 15, Jaquives Muse with 11 and Martavious Frost with 10.

The Cardinals (22-5) hosted Pine Grove Tuesday night in the opening round of the Class 1A playoffs. With a victory, they host the Smithville versus Shaw winner Saturday at 7 p.m. Next, with a win in that one, would be a state quarterfinal game Tuesday, Feb. 26, at a site to be determined. The final will be held at Mississippi Coliseum in Jackson on March 4 and the championship game March 7.

“This group has had a goal of making the name Potts Camp relevant again, and day by day, we seem to be doing that,” Dillard said. “Hopefully, we can continue on our journey – one game at a time.”

The Cards blistered the nets in the first half and carried a big 53-24 lead to the locker room at intermission.

Potts Camp was on target from beyond the three-point line in the first half. Walter Hamilton, Faulkner and Muse each nailed a pair of long-range shots to get the Cardinals off on the right track.

Top point-producers in the 28-point win were Faulkner with 17, Hamilton with 16, Conners with 12 and Frost with 11. Muse added nine and Saulsberry eight.