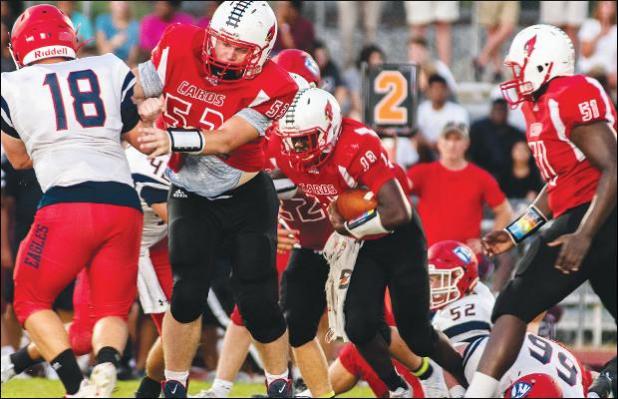 Photo by Dillon Day
Potts Camp’s Josh Blake (13) gains yardage versus Tupelo Christian with some blocking help from teammates, including Johnathyn Assad (53) and Jaquavian Bell (51). The Cardinals kick off the regular season this Friday night at home versus Tipton Rosemark (Tenn.).

The Potts Camp Cardinals gained some confidence Friday night when they hosted a football jamboree.

“Overall, I was definitely pleased,” he said. “I hope it carries over to the season, and we continue to grow.”

The Cards begin the new campaign this Friday at 7 p.m. by hosting Tipton Rosemark (Tenn.).

“It will be a big test for us,” Anderson said about facing the Rebels. “They’re pretty solid. The have a big, strong defensive end, and a quarterback who throws well. And they like the power running game. I hope we can handle it.”

As is somewhat typical for a preseason jamboree, the head coach said the defense was ahead of the offense.

“Offensively, we are replacing nine starters, so it’s kind of to be expected,” Anderson said. “We have to figure out some things.

“I knew we would struggle offensively, but it was not nearly as bad as what I thought it might be.”

On the defensive side of the football, he said his Cardinals played well except for one drive.

“We have to make a few adjustments and fix some things,” Anderson said. “We missed some assignments in the secondary.”

Versus TCPS, Jeremiah Scott scored the touchdown on a long run, and Josh Blake cashed in the two-point conversion.

Against Okolona, Marquise Turnage picked off a pass and returned it for six points.

“Defensively, I think we can be very good, one of the best I’ve coached, if we continue to improve,” said Anderson, in his second season at Potts Camp. “And I think the offense is going to get there. It is just going to take some time. Again, we’re replacing nine starters, and mistakes are expected.”