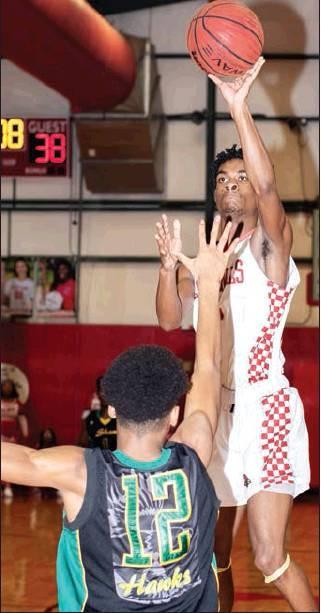 Photo by Dillon Day
Kylan Conners releases his shot in the lane Saturday against Shaw.

Nothing comes easy in post-season basketball. But the Potts Camp Cardinals were up to the tough task Saturday night.

Coach Jeremy Dillard’s team, playing at home, rallied from a 29-24 halftime deficit to down Shaw 62-56 in the second round of the Class 1A state playoffs.

“We faced a really, really good opponent, and we had to fight for that one,” Dillard said. “This time of year, all the teams have skills. It’s more about who has the heart and the want-to. I felt we had the most want-to, and it paid dividends late in the game.”

Potts Camp was down one, 13-12, to Shaw after one quarter and then by five at intermission.

Then Kadavian Faulkner and Kylan Conners led a thirdquarter surge for the Cardinals. Each scored six points in the period as Potts Camp outscored the Hawks 21-11 and took a 45-40 lead into the fourth.

Mitchell Saulsberry scored eight of his game-high 20 in the final eight minutes.

Other top point-producers for Potts Camp were Faulkner with 16, Conners with nine and Walter Hamilton with eight.

Next up the Cards (24-5) will face the Biggersville Lions Thursday of this week at home with a spot in the final four in Jackson on the line.

“We have to show up and leave our hearts on the floor again,” Dillard said. “Our community is extremely exited, and the home court has been very good to us. If we win in this next one, then we get to take a trip.”

With a victory Thursday, the Cards will advance to the Class 1A semi-finals next Monday, March 4, at 12 noon at Mississippi Coliseum, also known as “The Big House.”

The Cardinals made quick work of Pine Grove in the opening round of the state playoffs as they scored 53 first-half points on their way to a 93-31 rout.

Saulsberry was the game’s top point-producer with 25, and 22 of those came in the first half.

Hamilton was next in line with 19 points.

Thirteen Potts Camp players scored in the 62-point win on their home floor.