Photo by Bruce Newman
Kedavian Faulkner of Potts Camp drives toward the goal versus Coahoma County Friday afternoon at Ole Miss. He scored a team-high 13 points. 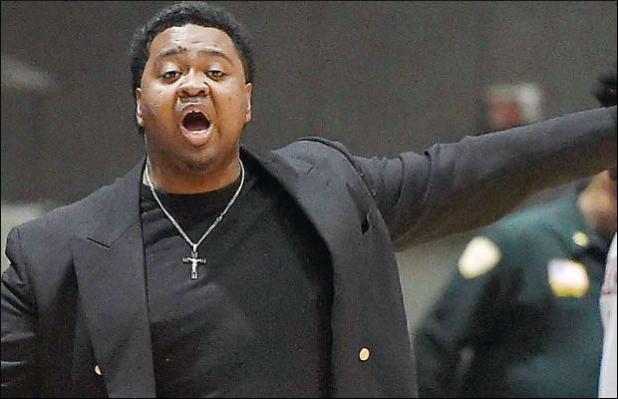 The start of the game didn't go well for Potts Camp Friday afternoon in The Pavilion at Ole Miss. Meanwhile, its opponent was red hot.

Coahoma County hit five threes, four by one player, in the first quarter on its way to a 56-36 win for the Class 2A state championship.

"And then Galmore, he's a baller. His pull-up game is among the best. He's a bigtime scorer."

Abby's fourth three gave Coahoma County a 21-4 lead at the 2:26 mark of the opening period.

Mitchell Saulsberry and Jaquives Muse responded with back-to-back buckets to make it 21-8 after one.

Potts Camp got to within nine twice late in the second, once on Kedavian Faulkner's jump shot and again on Martavious Frost's dunk.

Then the Cards trailed 3423 at intermission.

The Panthers upped their lead to as many as 18 in the third. However, Faulkner provided some spark near the end of the quarter, hitting a pair of shots that sliced the deficit to 44-31.

The Cards fell behind by 15 but cut it to 11 with less than six minutes left. They missed five consecutive free throws, one of those the front end of aone-and-one, that could have got them within striking distance down the stretch.

Instead, Coahoma County snatched the momentum back and won by 20.

"Free throws have been an Achilles heel for us all year," Dillard said.

"I'm very proud of my guys. They fought back, but between Abby and Gilmore, our effort was just not enough. They were the better team tonight. Give them the credit they deserve."

It was Coahoma County's third state crown in four years.

"You have nights like that, when your shots just don't fall, and the other team's do," Dillard said.

For the Panthers, Galmore had a game-high 17 points. Abby had 12, all in the first quarter. Tarkevious Logan added 10.

Potts Camp, which made the final four in Class 1A in 2019, finished as state runnerup this time around in 2A. Their record was 24-9. It was the Cardinals' first trip to the title game since 1993.

"Most people expected us to go out of the playoffs in the second round (at South Delta) but we showed we're here to stay. This is a special team."

"I'm extremely proud of my seniors," Dillard said. "They got 64 wins in three years ­ what else can you ask? When I got here I asked them to average 20-plus wins, and they did that for me."

State semi-finals The Cardinals knocked off Philadelphia 73-53 in the state semi-finals on Tuesday afternoon of last week at Mississippi Coliseum in Jackson. They came out of the starting gate strong and led 23-12 after one quarter. It was 38-28 at the half and 54-42 at the end of the third.