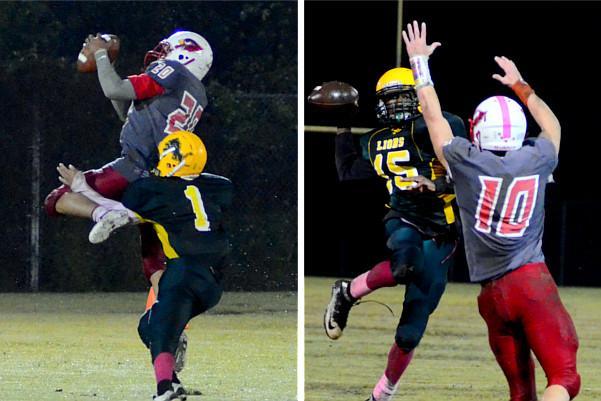 Photos by DeMill Dixon
(Left) Jabryan Pegues of Potts Camp goes high for a catch with Zachary Snow (1) of Byers on defense. (Right) The Lions’ Malik Glover (15) gets off a pass with pressure from the Cardinals’ Collin Massengill. 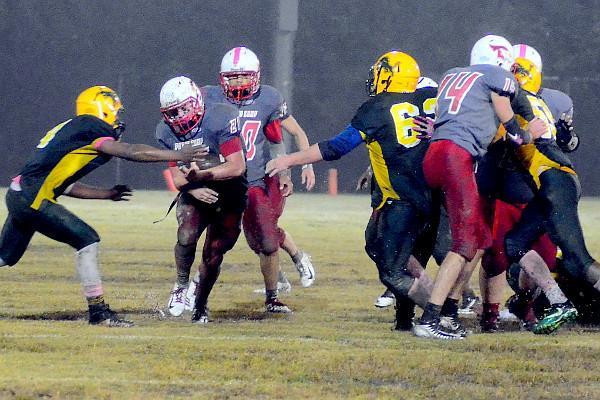 Photos by DeMill Dixon
Dakota Moore (second from left) of the Cardinals carries up the middle. Byers’ Julian Moore (4) and Mason Huckaby (63) reach for him. Potts Camp’s Ryan Baldwyn (14) blocks at right versus the Lions’ Jadarius Hurt. 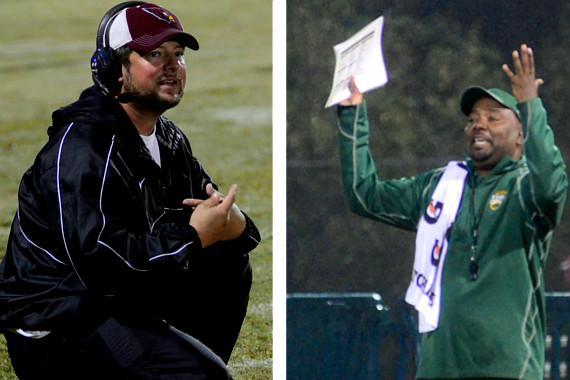 Coaches Darrow Anderson (left) of Potts Camp and Chris Daniels of Byers lead from the sidelines.

A fourth-quarter drive was the difference Thursday night when Marshall County rivals Potts Camp and H.W. Byers met on a muddy field.

“It wasn’t a pretty win,” coach Darrow Anderson said, “but one thing we can take out of a game like that is seeing the mental progress of our football team since week one of the season. With our backs against the wall, the guys said, ‘We’re going to win this football game,’ and we did.”

Potts Camp, down 12-8, took over with just less than seven minutes left in the game, and Dakota Moore was the workhorse. He carried seven times. On a fourth and 3, he broke a tackle and carried 6 yards for the first.

The Cardinals later faced a fourth and six from the Byers 17. The Lions jumped offsides, making it fourth and one from the 12. Moore ran 8 yards for the first and then 4 more yards on the next play for the game-winning touchdown. He also cashed in the two-point conversion with 1:54 remaining.

“I’ve told our kids that one or two plays can cost you the football game, and that happened to us Thursday night,” said Chris Daniels, head coach of the Lions.

“We had their guy in the backfield on that fourth and three and missed him. If we had made the tackle, it would have been the ball game. We could have run out the clock.

“Then we jumped offsides, and that was a huge play in the game. We have to get better disciplined.

“But, I know this, my guys played hard until the very end.”

The defenses dominated in the first half.

Potts Camp fumbled on its first possession and Jadarius Hurt recovered for Byers.

Then the Lions mishandled a punt and Jabryan Pegues recovered for the Cards.

Byers’ Zachary Snow got a big tackle for loss on a fourth-and-five try by Potts Camp.

Early in the second quarter, Byers took over at its own 43 after halting the Cardinals.

Julian Moore got loose twice, once for a 24-yard gain and then again for 27 yards to the 1. The Lions went backwards on the drive due to a flag but got the touchdown on a 7-yard pass from Malik Glover to Keshaun Carter, who made a shoestring catch in the end zone. The try-for-two failed. The host team led 6-0 with 8:44 to go in the first half.

That score held until intermission.

“I think three times in the first half we were inside the 30, but didn’t come close to putting it in the end zone,” Anderson said.

He then made some halftime adjustments.

“Everything we normally do offensively – speed plays to the outside and counters – wasn’t working,” Anderson said. “We couldn’t make the cuts.”

In the second half, he put his quarterback under center instead of in the shotgun formation and went to the power-running game with tight end Moore moving to running back.

“He lowered his shoulder and carried us,” Anderson said. “We couldn’t have done it without him.”

The Cardinals, with Moore carrying five times in the seven-play drive, got on the scoreboard with 7:54 left in the third. He ended the 60-yard drive with a 15-yard carry to the end zone. He also ran for the two-pointer. The visitors led 8-6.

Later in the quarter Potts Camp had a miscue in punt formation, and Byers took over at the Cardinals’ 31.

After an incomplete pass, Glover kept around left end and dashed the distance for the six points. The try-for-two failed. Byers was back on top 12-8 with 1:25 to go in the third period.

The Byers defense then rose to the occasion again, stopping the Cards on a fourth-down try to start the fourth.

The Lions’ offense earned one first down before having to punt back to Potts Camp, which unleashed its five-minute drive to win the game.

“I thought our kids played their hearts out and never let up,” Anderson said.

Daniels said, “I thought we handled the conditions well and battled hard all night long.”

It was the Cardinals’ third straight win to improve to 4-6 overall and 3-4 in Region 1-1A. They will finish the season this Friday by hosting district foe Okolona.

Byers dropped to 1-9 overall and 0-7 in the district. The Lions will visit district opponent Ashland Thurs­day night to wrap up the season.

“We have to put this one (the loss to Potts Camp) in the rear view mirror and get ready for Ashland,” Coach Daniels said.