Photos by Dillon Day
Charles Powell (7) of the Indians falls forward for extra yardage as a pair of Hawks (on the ground) make the tackle. Other Indians block, while Holly High players close in. 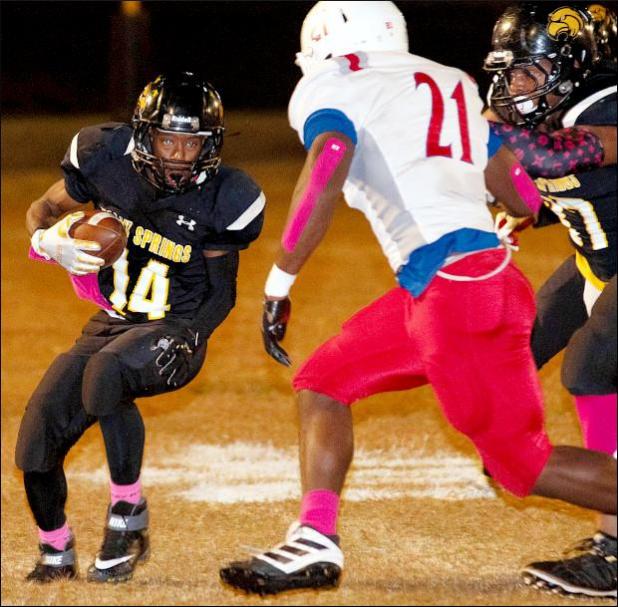 Lemon Phelps (14) of Holly High carries with Tomarcus Kimmons (21) of Byhalia pursuing. Blocking, at right, for the Hawks is Anthony Gulledge Jr. (37).

Byhalia didn’t lead until the fourth quarter Friday night, and it was a freshman quarterback who delivered.

Dustin Grisham threw to Terrance Davis for a 48-yard score to put the Indians up 18-14 at Holly Springs. They got another score in the last 90 seconds and defeated their intracounty rival 26-14. It was their fifth straight win in the series.

“That touchdown (with 10:02 left)put us ahead and sort of relaxed us,” coach John Danley said. “I put Dustin in to try to give us a little spark and he found the open receiver on the play-action pass. He’s the future, and he’s a good kid.”

“That was crazy,” Danley said. “We haven’t had that all year – all the holdings and chop blocks.

“It was an ugly game – the ugliest we’ve played all year – but we got the win.”

“What you hope is that we will learn from those mistakes and get better,” he said.

The Hawks got the momentum at the start. The Indians fumbled the opening kickoff, and Marquav Monger recovered at the Byhalia 16.

Holly Springs scored on a 13-yard pass play, on third down, from Dylan King to Antonio Evans. Willie Finley added the extra point with 10:37 to go in the first quarter.

The Indians answered three plays later. They overcame their first holding penalty of the night when Charles Powell took a handoff, found a hole and raced 92 yards for the touchdown. A try-for-two was not successful. Byhalia trailed 8-6 with 9:26 to go in the first.

The two teams swapped punts for most of what was left of the first half. The Hawk defense also got a big stop on a fourth-and-6 play.

In the second quarter, starting at the 8:13 mark, Holly High produced a six-minute, 10-play drive. Kadarreon Lumpkin ran for a pair of first downs, including a 19-yard carry to start the march. It ended successfully when King threw to Davionta Faulkner over the middle, on a fourthand-6 play, for the 18-yard touchdown. Finley added the extra point with 2:46 left until halftime. The lead was 14-6.

The Indians drove well into Holly High territory but flags pushed them backwards. A pass on fourth and 12 fell incomplete.

The half ended when Byhalia’s Rayderrius Proge picked off a pass to stop Holly High’s try for more points.

“We certainly would have liked to have pushed it in for another touchdown before half,” Hemphill said.

Then things did not go the Hawks’ way to start the second half.

A fumble gave the Indians the football at the Holly High 27.

“That’s when momentum started swinging in their favor,” Hemphill said. “That gave them life.”

After a couple of good gains, plus a couple of flags, Byhalia faced a fourth and 24 from the 30. Quarterback De-Quan Moore launched a pass toward the end zone. It ricocheted off a Holly High defender in position to make the interception and right into the hands of the Indians’ Davis, who scored.

“That was the luckiest thing I’ve ever seen,” Danley said.

Hemphill said, “We were very unfortunate there. We have to learn how to make plays when the opportunity presents itself. It’s a frustrating process but that’s what we’re going through.”

A try-for-two after the touchdown failed. Byhalia had cut its deficit to 14-12.

Three punts followed, two by Holly High and one by Byhalia.

Late in the third, Danley inserted Grisham as the signalcaller. A 16-yard run by Powell pushed the ball into the Hawks’ territory. Then the Indians went backwards again, this time on a snap mishap. On third and 18, Grisham hooked up with Davis early in the fourth for the go-ahead points. The conversion try was denied. Byhalia led by four.

With 2:36 left, the Holly High defense got a big stop at its own 5-yard line.

Two plays later Byhalia’s Jacob Edwards intercepted a pass and returned it 27 yards to the Hawks’ 3.

A flag pushed the Indians back but they scored on a 12-yard carry by Jacoreion Crockett. He also ran for the two-pointer, putting the 26-14 final on the board.

“I thought our offensive line settled down in the second half,” Danley said. “We were able to run or pass.

“It’s been a roller coaster ride for us all season, and this was a prime example. We overcame a lot of mistakes to win the football game.

“I told the kids at halftime, ‘it’s up to you,’ and they came through.”

Hemphill said protecting the football on offense, plus creating turnovers on defense, has to be a point of emphasis.

“That’s what we will continue to preach,” he said.

The Indians (5-5 overall and 1-3 in the district) end the regular season Friday by hosting Independence. With a win, they still have a shot at making the playoffs.

The Hawks (2-7 and 0-4) wrap up their season Friday night by hosting North Panola.