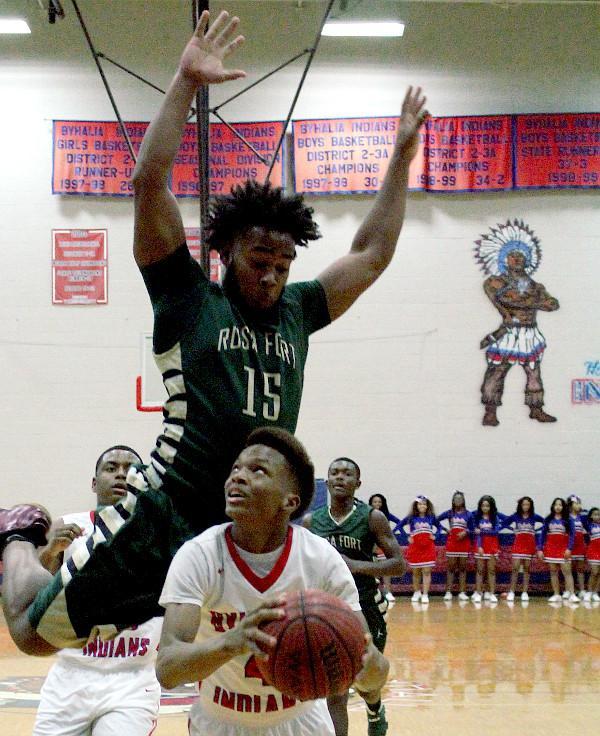 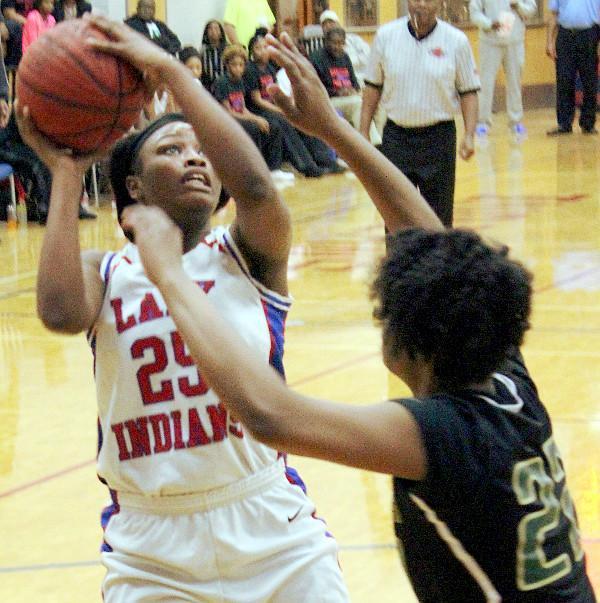 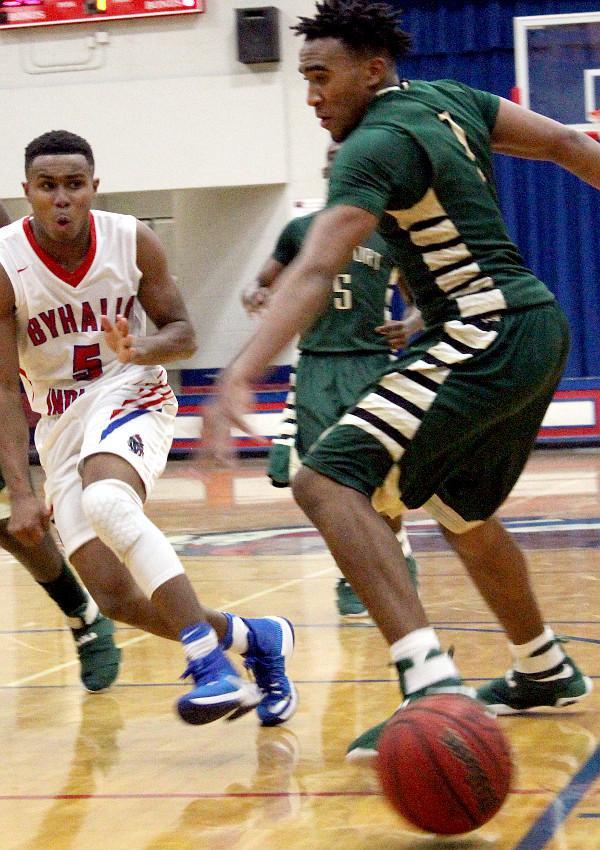 Avion Graham (5) of the Indians passes the ball past a Rosa Fort player on a fast break to one of his teammates.

A few days earlier, the Byhalia Lady Indians had dominated the New Albany Lady Bulldogs for a road win.

And in the game this past Friday night, the Lady Indians were too much for the Rosa Fort girls.

The Byhalia girls, ranked fifth in the state this week by the Clarion-Ledger, stormed past the Lady Lions 76-46 to improve their overall record to 10-4 and District 2-4A mark to 2-0.

Tiyanna Powell had 19 points (14 of those scored in the second half) to lead the Byhalia team. Also in double figures were Kavacia Johnson with 14, Ariel Tunstall 11, and Leekadra Smith 10. Johnson dished out 11 assists.

The Lady Indians went into quick action with back-to-back buckets from Johnson and Shaquira Caradine. The Lions poured in some shots, too. Nakira Johnson’s three had the Lady Lions trailing by two, (8-6) midway through the first. But Rosa Fort’s scoring became stagnant. Byhalia’s defense caused the visitors to commit turnovers in this frame. The Lady Indians were able to produce points off those turnovers.

Smith’s trey helped put the Lady Indians up 19-7 with 2:43 remaining. At the sound of the buzzer, Smith sank a two-pointer. The Lady Indians were leading 25-10 as the first had expired.

At intermission, the Lady Indians held a 24-point advantage, 41-17.

At the start of the third, both squads had difficulties trying to connect the ball to the nylon. Minutes later, Tunstall fired in a shot to get things going. Lady Lions Latavia Jones and Tess Henderson each made a basket. Rosa Fort girls had gained 15 more points versus Byhalia’s 10. But at the end of the third, the Lady Lions were still trailing, 51-32.

The Lady Indians didn’t let up in the fourth. Powell dropped in 10 points and Tunstall netted eight for Byhalia to win the district game.

Earlier in the week, the Indians had routed New Albany on the road. But on Friday night, it came down to a close contest in the fourth.

The Bulldogs were trailing the Indians by 23 points in the first half and 19 in the third. In the fourth, the Bulldogs had trimmed the deficit down to seven. The Indians barely escaped the Bulldogs, 58-51, for a district win.

Jamaris Briggs spun off six quick points for the Indians at the start of the first quarter. Kaleb Banks’ two put the Lions on board with 4:54 remaining. Antwon Porter made a jumper to further extend the lead for the Indians, 10-6. Briggs came back and made a basket to put the Indians up 15-6 as the first had expired.

There was some erratic playing in the third as both teams battled for ball control. The Lions tried to narrow the gap but came up short. The Indians had outscored the visitors 16-11 to stretch the lead to 49-30.

The Lions’ scoring kicked up a notch in the fourth. They fired in 21 points compared to Byhalia’s nine. But it was a little too late. The Indians had pulled away to win the district game.

Briggs was the top producer for Byhalia with 23 points. Avion Graham had 11.

Byhalia teams drove east on I-22 last week and opened District 2-4A play with victories Tuesday of last week.

The Lady Indians cruised past New Albany 60-39, and the Indians routed the Bulldogs 87-56.

The Byhalia girls, capitalizing on some solid defense, jumped out front 23-8 after one quarter.

The Lady Bulldogs fought back to close the margin to 29-21 at the half.

In the third, the Lady Indians’ aggressive zone defense helped them regain control at 45-29. And Byhalia went on to win by 21.

“All the girls played a key role in helping us come out with the victory,” Williams said.

It was a contrast of quarters in the first half of the game between the Byha­lia and New Albany boys.

The Indians fell behind 17-13 following the first period. But they went on the warpath in the second quarter, outscoring the Bulldogs 36-8 to take a 49-25 halftime advantage.

DeAndre Martin scored 21 of his 23 points in the second quarter.

“We had a slow first quarter, and then I put DeAndre in the game and he shot lights out and the momentum carried on from there,” coach James Sales said.

Byhalia dominated the second half and left New Albany with the 31-point win.

Graham scored a game-high 26 points for the Indians. Corvell Todd and  Porter added 12 and 10, respectively.