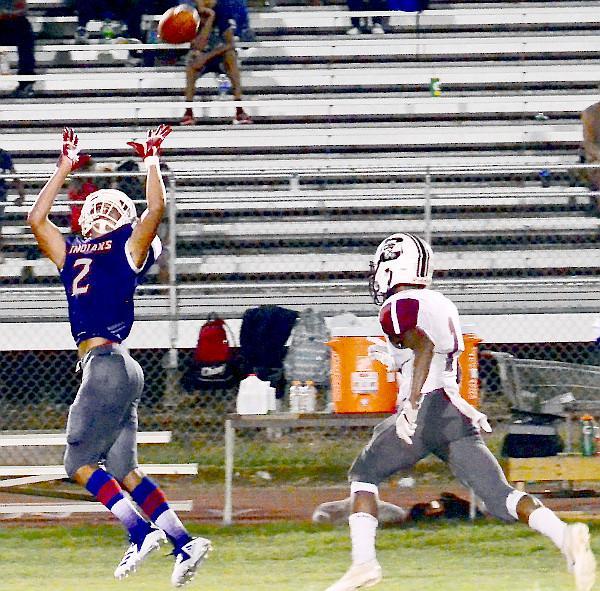 Photo by DeMill Dixon
Terrance Davis (2) of the Indians looks to make the catch as a Caledonia player pursues. 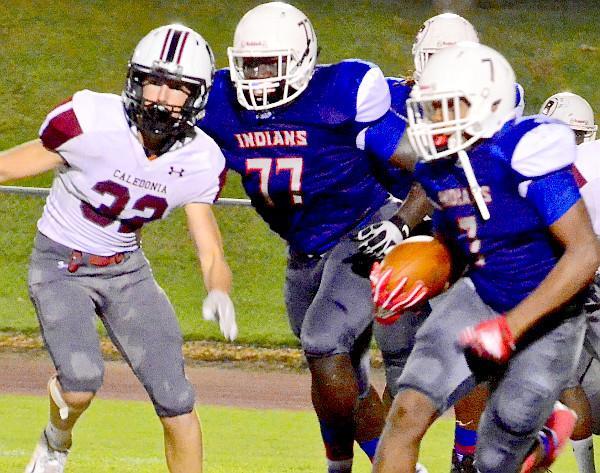 Byhalia got back in the win column Friday night after two straight losses.

“I told the kids - ‘let’s get back on the other side,’ and they responded,” said coach John Danley, whose team improved to 3-2. “They’re putting the work in, and it’s paying off.”

The running game was rolling. Charles Powell and Lataryl Daugh­tery combined for 399 yards in the 28-14 victory over Caledonia.

“We actually came out throwing and sort of caught them by surprise, and then that opened up the running game,” Danley said. “We did a very good job of running the football.”

Powell had touchdown runs of 6, 26 and 9 yards, while Daughtery scored on a 12-yard carry.

“We played hard from the opening kickoff to the final buzzer, and I’m proud of that,” he said.

“Sure, we had some stalled drives, missed passes, a couple of turnovers, but overall I was pleased with our pro­gress.”

Danley said the defense is stepping up and playing like he expected.

“I bragged about the defensive unit in the spring, and now they’re starting to play that way,” he said.

Yaphat Hearn returned to the lineup this week after an injury, and “he’s the leader,” Danley said.

“We really bounced back this week and showed we are growing as a football team,” he said.

The Indians will play one more game before getting into the Region 1-4A portion of their schedule. They host Coldwater this Friday night for homecoming. The Cou­gars are 1-4, coming off a 51-6 loss last week to Biggersville.

“It is important we come out and play well and get ready for district,” Danley said.

Byhalia will travel to Corinth the next Friday night, Sept. 28, to kick off district action.