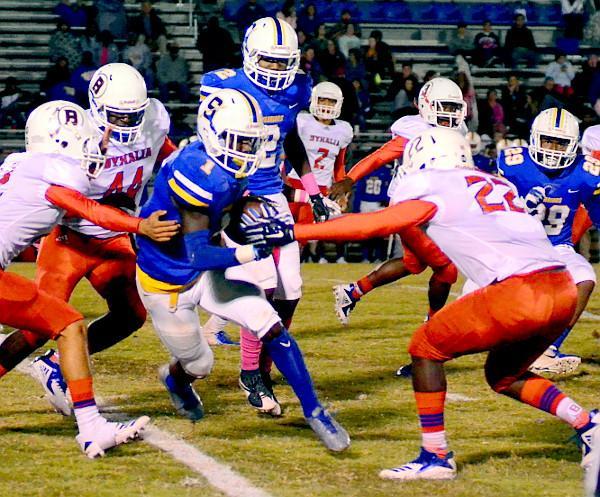 Byhalia could have turned the tide late in the first half Thursday night at Senatobia.

Instead, the Warriors used a fake punt to get a first down and scored four plays later to take a 21-0 lead at the intermission. They went on to hand the Indians a 42-10 loss.

“That hurt us,” coach John Danley said about the Warriors’ push for points late in the first half. “Playing from behind has been our achilles heal all year.

“We have to get off the field on fourth down. Once we are able to that, we will be a better football team.”

After the Warriors took a 7-0 lead, the Indians drove to the Senatobia 16 but failed to convert on a fourth-down try.

“We moved it all the way down and didn’t punch it in,” Danley said. “We have to finish those drives.”

But the Byhalia defense rose to the occasion when Senatobia quarterback John Michael Foster was pressured, hit and fumbled. Nick Jones recovered for the Indians.

Then the Byhalia possession stalled near midfield.

Senatobia put together a 79-yard, 12-play drive midway through the second quarter. It ended with Foster’s 33-yard touchdown pass to Camren Loveberry. Koby Rhone nailed the kick, as he did all his tries on the night.

The Warriors then closed the half with a 73-yard drive, sparked by the fake punt. The score came on a 20-yard strike from Foster to Niageria Young.

The Indians’ Balies Jones recovered a fumble on the third play of the second half.

The offense cashed it in. Yaphat Hearn had a 16-yard carry for a first down, and he scored on a 1-yard plunge with 8:26 to go in the third. Daniel Williams kicked the extra point.

Senatobia snatched the momentum back quickly. On a second-and-10 play, Foster threw short to Malik Hunter, who dashed along the sideline for a 62-yard touchdown. It was 28-7 in favor of the home team.

Early in the fourth, Williams hit a 30-yard field goal to cut Byhalia’s deficit to 28-10.

However, the Warriors struck back even quicker this time. Rashad Thomas re­turned the ensuing kickoff 71 yards for a touchdown.

The Warriors added their final touchdown at the 7:08 point of the fourth. Deondre House found the end zone from 4 yards away.

“If we win these last two, we can make the playoffs as the fourth-place team (in the district),” Danley said. “We have to regroup and make a playoff push.”

Ripley is 3-5 overall and 2-1 in the district (beating Tishomingo and then losing to Senatobia and Corinth).