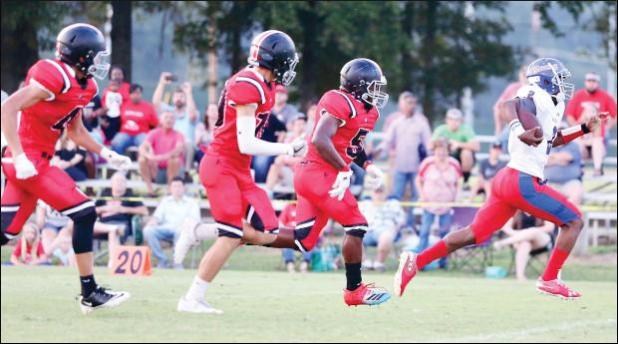 It took three hours and big play after big play for Marshall Academy to win a shootout Friday night over Myrtle.

The Patriots got four touchdowns of more than 50 yards and turned back the Hawks 48-46.

“That was one heck of a football game,” head coach Barrett Donahoe said. “Our guys kept fighting. We got big plays when we had to have them.

“We were not consistent offensively, but we had a lot of nice possessions.”

And even though the defense gave up 46 points, it stepped up at the most important time, stopping Myrtle’s two-point conversion try with 1:11 left.

“We certainly have to be better defensively, but at the same time, I thought we improved defensively from our opening game of the season,” Donahoe said.

On Marshall’s first play from scrimmage, quarterback Jeremiah Jones kept the ball on the option and dashed 88 yards for a touchdown. Rusty Bolden added the two-point conversion.

Myrtle drove to the MA 10. On second and goal, Philip Parks intercepted a pass and returned it 95 yards for a score. A tryfor-two failed. It was 14-0.

The Hawks got on the scoreboard with 3:40 left in the first quarter. A.I. Nugent went into the end zone standing from 14 yards out. Elijah Johnson’s kick was good.

Marshall answered less than a minute later. Parks took the toss, cut back to the middle of the field and traveled 58 yards for six points. The pointafter try was no good. MA was up 20-14.

The Hawks got the last two touchdowns of the first half to take a 27-20 lead at the break.

Nugent plunged into the end zone from 2 yards away at the 9:30 mark of the second quarter. Dillard kicked the extra point.

Then with 1:55 left, Ethen Hunt carried over the left side for a 3-yard touchdown. The point-after try was no good.

The Patriots got back on track to start the second half. Landon Houston returned the kickoff 28 yards. Colton Neal had a pair of first-down carries. Sam Greer took the pitch on an option play, broke a tackle and scored from 20 yards out. Houston carried for the two-pointer to put MA on top 28-27.

“That was big, coming out after halftime with that drive,” Donahoe said. “It was a sharp, well-executed drive.”

The Hawks fumbled the ball away on their next possession.

On the first play after the turnover, Jones got loose for 90 yards and a touchdown. Bolden cashed in the twopoint conversion, and the Pats led by nine.

“That was huge; he (Jones) ran the option to perfection,” Donahoe said.

It took only three plays for Myrtle to answer. Nugent went 56 yards for the score. A try-for-two was stopped short. The score was 36-33 in favor of Marshall.

The Hawks stopped the Patriots’ fake-punt try and took over at the MA 41. On the first play from there, it was Nugent again, his fifth touchdown of the night. Dillard’s kick put Myrtle on top 40-36.

Midway through the fourth, MA’s Jack Smith carried for back-to-back touchdowns, the first 33 yards and the next 4 yards. The 4-yard score came after Bolden’s 66-yard punt return. The Patriots could not get the conversion tries and led 48-40 with 6:38 to go in the game.

The Hawks marched to the Marshall 15, and Smith’s interception at the 11 halted the scoring threat.

Myrtle got the ball back with under three minutes left. Nugent scored on a 2-yard carry with 1:11 remaining but the MA defense rose to the occasion and stopped him on the two-point try.

The Pats, after Rod’Drickas Moore covered up the onside kick, ran out the clock.

“We played with a lot of intensity out there tonight,” assistant coach Jason Taylor told the players after the contest.

“I saw an MA team grow up a lot tonight,” assistant coach Bruce Branch said. “We have to build on this win.”

Jones carried seven times for 182 yards and a pair of touchdowns, Parks 11 for 109 and a score and Smith five for 50 and two touchdowns.

Top tacklers were Moore and Greer with nine and a half each and Slater Knox with nine. Jordan Bonds had seven tackles and a fumble recovery. Houston also had an interception.

The Patriots (1-1) travel to Grenada this Friday to face Kirk Academy.The Raiders are 0-3, coming off an 8-6 loss last Friday night to Tunica Academy.