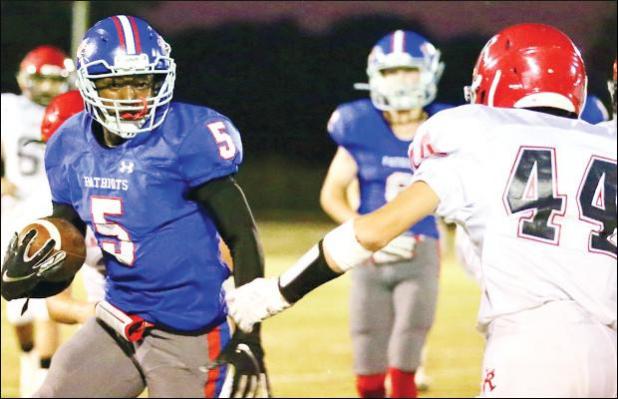 Photo by Theresa Bolden Devore
Marshall’s Philip Parks (5) gains some of his 283 yards.

The touchdowns just kept on coming for Marshall Academy on the last Friday night of September.

The Patriots scored eight, six of those by running back Philip Parks, in a 58-39 win over Oak Hill at home.

They improved to 3-2 overall and 2-0 in District 1-3A. They will play for a district championship this Friday at Tunica Academy.

“We did a great job offensively of creating big plays,” coach Barrett Donahoe said. “We played really well the first half.”

MA led 38-13 at intermission but had trouble putting the Raiders away in the second half. The visitors got to within 18 a couple of times and had chances to pull even closer.

“We have to have the urgency to finish a game like that,” Donahoe said.

The Patriots went up 16-0 to start the contest. Parks scored on a 2-yard run at the 8:55 mark, followed by a pass from Jeremiah Jones to Sam Greer for the two-point conversion. About four minutes later, Parks carried to the left, made a cut and darted 61 yards for a score. Jones kept for the twopointer.

Oak Hill scored late in the first, making it 16-7.

MA answered with a 54-yard drive. Jones scored on a 6-yard keeper and then threw to Rusty Bolden for the twopoint conversion.

The Patriots capitalized on an Oak Hill blunder in the punting game when Parks scored on a 7-yard carry. Jones ran for the two-pointer, and the lead was 32-7 with 5:52 left in the second period.

The Raiders cut it to 32-13 before Marshall added one more touchdown prior to halftime. A 34-yard pass from Jones to Walker Sanders, who made the catch even with an interference call, pushed the ball to the Oak Hill 12. Parks scored from there, and a tryfor-two failed.

Turnovers, by both teams, highlighted the first few minutes of the second half.

Later in the quarter, after the Patriot defense stopped the Raiders on a fourth and seven, Parks struck again. This touchdown run covered 72 yards. The conversion try was not successful. MA was up 44-20.

Oak Hill got to within 18 again with a 1-yard touchdown run in the first minute of the fourth.

Then the Patriots were able to finally tuck the victory away with a pair of touchdowns. Jones darted 58 yards up the middle for a score, and Parks carried for the conversion. With 7:24 remaining, Parks got his sixth and final touchdown of the night, this one 55 yards. The extra-point kick was no good. The lead was 58-26.

Oak Hill added a couple of late scores, the last one coming with one second left on the clock.

On defense, Jimmy Morales led the way with six tackles, while Rod’Drickas Moore had five and a half, and Taylor Cox had five.

The Patriots make the short road trip to Tunica this week with a district crown on the line. The Blue Devils are 2-3 overall, coming off a 35-8 loss to Lee Academy (Clarksdale). They’re 1-0 in the district.

“It’s championship week,” Donahoe said. “We have to focus and bring that blue (firstplace) trophy back to our campus.”