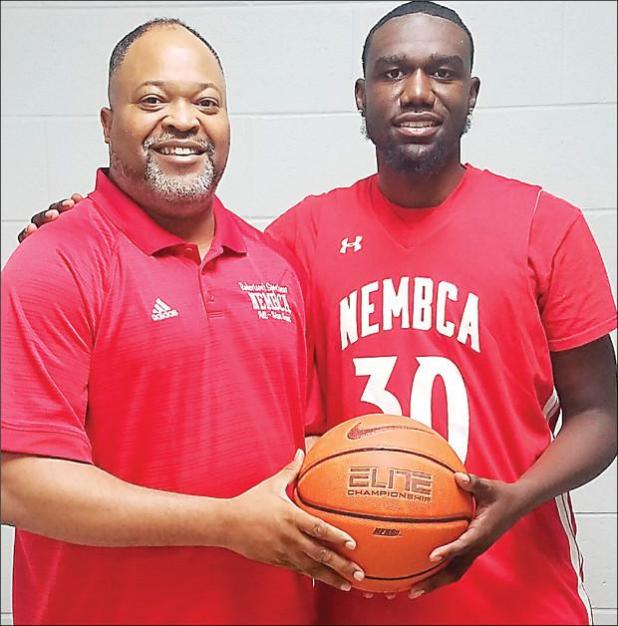 Pictured at the recent all-star event in Booneville are coach Sylvester Kilgore and Deveon Miller from Holly High.

Five players and three coaches from Marshall County were part of the allstar game experience recently in Booneville.

“It was my first time, and I really felt welcomed,” Coach Cooper said. “The atmosphere was exciting, and I saw a lot of good talent (girls and boys).”

All of the players participating are recent graduates of their respective schools.

Tunstall and Brounson have signed with Northwest Community College and Porter with Itawamba Community College. They, and their high school coach, were a part of the Classes 3A-6A Blue Team.

“All three of those guys played well,” Cooper said.

Porter scored 15 points, grabbed nine rebounds and fished out four assists. Tunstall added five points and seven rebounds. Brounson had a pair of rebounds and a steal and had “an overall good game,” Cooper said.

“We had a couple of practices together and then played the game,” he said. “And our team had good chemistry.

“There were a lot of college scouts there, and the atmosphere was great.

“I’m expecting great things out of Tunstall, Brounson and Porter at the next level.”

Miller, a Northwest Community College signee, played for the Red in the 3A-6A game.

“It was the last high school hurrah for Miller, and I was proud to be able to coach him one more time,” Kilgore said.

“The all-star game is an outstanding experience for these young people,” said Kilgore, who was a part of his second one. “It gets bigger and bigger each year.”

Coach Dillard had the allstar experience for the first time. And one of his former Cardinals, Conners, scored 14 points and had eight assists for the Red Team in the 1A-2A contest.

“It was very enjoyable,” Dillard said. “We met other players, some who we had played against, and I had the opportunity to learn things from other coaches.

“Kylan played extremely well for his minutes in the game.

“Overall, it was a great experience,” Dillard said. “I’m very thankful for the opportunity to coach some of the best 1A and 2A players in the state.”