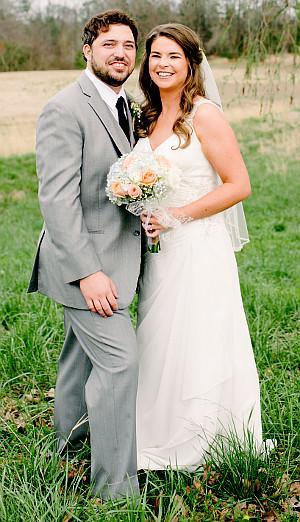 The sanctuary of Slayden Baptist Church was the setting for the five o’clock celebration of the marriage of Traci Michelle Rodgers and David Eugene Hoggatt on March 10, 2018. The double-ring ceremony was officiated by the Reverend Rusty Fair of Iuka, former minister of Slayden Baptist Church. Polly Gill provided a program of piano music for the ceremony and prior to the wedding. Derrick Hunter, minister of music for the church, assisted.

The bride, given in marriage by her father, was elegant in an ivory chiffon gown by Mori Lee of New York. The gown featured a sweetheart neckline and was enhanced with exquisite jeweled shoulder straps. The fitted bodice was ruched to her waist and accented with a detailed beaded lace applique. The soft, flowing skirt extended to a chapel-length train which made quite the entrance down the aisle. Completing her bridal portrait, Traci wore a fingertip-length veil which was detailed with beaded edging that coordinated with the jeweled straps. As her “something blue,” the bride chose to wear Converse tennis shoes with her monogram in blue on the tongue of the shoe. She carried a hand-tied bouquet of white hydrangeas, peach roses with a sprinkle of gypsophilia. The bouquet was adorned with her maternal grandmother’s gold piece and her “something borrowed” was a charm from one of her bridesmaids, Samantha Dees.

Attending as maid of honor was Katie Marie Opland of Birmingham, Ala.. The bride’s sister-in-law, Mrs. George Thomas Rodgers Jr., served as matron of honor.

The mothers carried bouquets similar to those of bridesmaids while grandmothers wore wristlet corsages to complete their ensembles.

Flower girls were Jaylin Kassidy Hooper of Murfreesboro, Tenn., and AnnaBelle Grace Mansell of Clinton. They wore full-length dresses with sheer overskirts and carried miniature bouquets similar to that of the bridesmaids.

Ringbearers were Emmerson Hayes Rodgers, nephew of the bride, and Jack Michael Trimm of Madison.

The altar area of the sanctuary was beautifully lighted with candles in tall glass cylinders.  The altar table held a large floral arrangement and appointments for Communion which was served to the bride and groom and their parents during the ceremony. Reserved seating was marked with arrangements of ruscus and springerii tied with ice blue, white and burlap ribbons.

Following the ceremony, the brides’s parents hosted a reception at the Quonset of Collierville, Tenn. The entrance featured wooden boards for guests to sign. Tables also held memorabilia of the bride and groom which offered a pictorial caption of their dating days. Guests were treated to hors d’oeuvres buffets by Draper’s Catering of Memphis, Tenn. The bride chose for her guests to enjoy a variety of cupcakes artistically decorated by Mrs. Norris Roberts of Slayden, a long-time family friend, and served from a handmade, tiered server made especially for the reception by the brides’s father and cousin, Joseph Samuel Lundine, Slayden. The groom’s cake favorite featured a variety of City Hall cheesecakes. Servers for the cake tables were Ava Michelle Rodgers of Byhalia and Annsleigh James Fair of Iuka.

Music for the reception was provided by Dr. Zarr and the Amazing Funk Monsters of Memphis. The bride and groom danced their first dance to “Who I Am” by Wade Bowen. The bride and her father danced to “Rope the Moon” by John Michael Montgomery. The groom joined his mother on the dance floor to “I Hope You Dance” by Lee Ann Womack.

As the evening drew to an end, guests were given bright colored glow sticks to light the couple’s departure. Red carpet was rolled out for the couple to  enter the limousine, which was draped with floral garlands. All Star Limousine Service took the happy couple to downtown Memphis where the Madison Hotel awaited their arrival. The newlyweds departed from Memphis to San Diego, Calif., the  following day for a week of sightseeing up the West Coast of California.

Regel & Company provided all florals and rentals for the Rodgers-Hoggatt wedding and reception.

Photography  was offered by “Thankfully Taken,” Karen Dickey of Hernando. Videography was captured by Beth Allen Long of Tallahassee, Fla., childhood friend of the bride.

On the eve of the wedding Mr. and Mrs. Ira Eugene Hoggatt Jr. honored their son and his bride with a rehearsal dinner. Guests included the wedding party and a large host of friends who seized the true “Memphis Spirit” being the first guests of the Meddlesome Brewing Company of Cordova, Tenn. Simply Done of Collierville offered an amazing array of delectable favorites of the bride and groom and was the kickoff event for the entire weekend for Traci and David.  Meddlesome Brewing honored their very first wedding couple with etched monogrammed glasses to commemorate the special occasion. Beautiful floral arrangements centered each table and were the designs of Simply Done.

The bridesmaids were honored on the eve of the wedding with a luncheon at the home of Mr. and Mrs. Gregory Darryl Allen Sr. of Slayden, aunt of the bride. A delightful Southern meal was enjoyed. Mrs. Howard Reid Carpenter Jr., aunt of the bride, assisted in hostessing. The bride chose this occasion to honor those who stood with her in the wedding and be reminded of their many years on the basketball court during high school and college. Bridesmaids received gifts of personalized Converse tennis shoes. These girls and a host of other friends started their wedding gatherings in Nashville, Tenn., where the bachelorette party was held during the New Year’s holiday.

The bride and groom were honored with parties prior to their wedding day.

On January 20, a Flannel and Fizz Party launched the party season. All the guests were invited to wear flannel and enjoy an evening in the home of Mr. and Mrs. William Adair, Slayden. Hosts and hostesses were Mr. and Mrs. Colby Newton, Mr. and Mrs. Colby Curtis and Miss Erica Owens. Guests were treated to a chili bar as well as a gourmet hot chocolate bar. The photo booth provided fun and memories for the high school and college friends. Monogrammed cookies were favors for the guests as they departed.

A delicious meal of a variety of soups and hot chocolate completed the menu for the cool afternoon.

As guests arrived they were invited to share best wishes on Jenga blocks. It was an afternoon of ole-fashioned fun, remembering and good cheer for the happy couple.

On January 27, the couple traveled to Crystal Springs, where they were honored by friends of the groom, with a miscellaneous couples shower.

Parties concluded with a bridal luncheon on April 8, given with love by cousins of the bride’s mother. The occasion was held at the Slayden Baptist Church Activity Center. Guests were treated to a delicious salad plate and Dena’s Lemon Delight for dessert.

The bride received advice and wisdom from the Bible for a successful marriage as well as  a monetary gift from each guest.