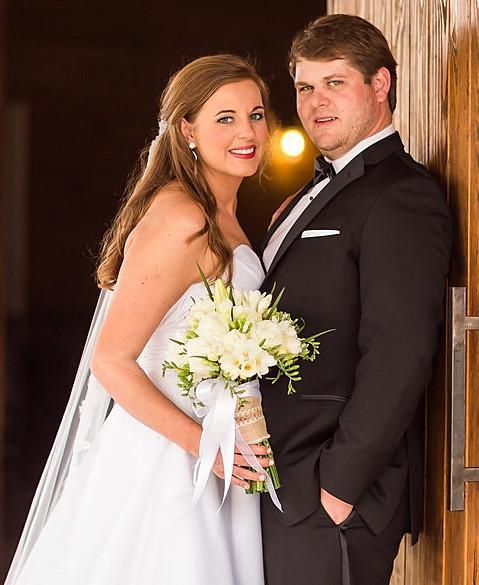 Scott Paul Sawyer and Rebecca Elizabeth Smith were united in marriage on February 20, 2016.

Guests enjoyed the wedding weekend at the Ross Bridge Renaissance Hotel. The rehearsal dinner was held at the rustic, unique setting of The Barn at Shady Lane in Hoover, Alabama, as was the wedding. The rehearsal dinner consisted of Southern comfort foods by Happy Catering. After good-hearted toasts and well wishes, the attendees enjoyed the couple’s lifetime slideshow, provided by Christopher Smith, the bride’s brother.

The exquisite floral arrangements and bouquets for the weekend were designed by family and friends, Julia DeBardeleben, Barb Sawyer and Sharon Williams. Lifetime friend of the groom’s mother, Pat Woods of Byhalia, sang “Love Never Fails” at the ceremony. Violinist and bridesmaid Ally Beall of Wilmington, North Carolina, provided the music for the entrance of the wedding party.

The ceremony was officiated by Reverend Doctor James Biedenharn of Metairie, Louisiana. He is the former pastor of Byhalia United Methodist Church.  Daniel Lowe read Scripture from the groom’s father’s Bible. The bride was lovely in a strapless white ball gown. For something old the bride wore a mink wrap that once belonged to the late Fay Lanier, the groom’s mother’s aunt. Something new was a bracelet from her sisters, Hannah and Abbey and her wedding gown given by her aunt Patty Salem. Something borrowed was her grandmother’s earrings and an heirloom bracelet once belonging to her great-grandmother. Something blue was her David Yurman bracelet, a gift from the groom.

A reception followed with a variety of decadent foods by Happy Catering and cakes by Magic Muffin Bakery. Dancing began with the couple’s first dance as man and wife to “I Can’t Help Falling in Love with You,” the father-daughter dance to  “Isn’t She Lovely,” and the mother-son dance to  “Forever Young.” The wedding party and guests enjoyed dancing to the band “Brother to Brother.” Completing the reception was the guests giving the newlyweds a “sparkler send-off.”

The Sawyers enjoyed a honeymoon in Savannah, Georgia. The couple is at home in Corinth.