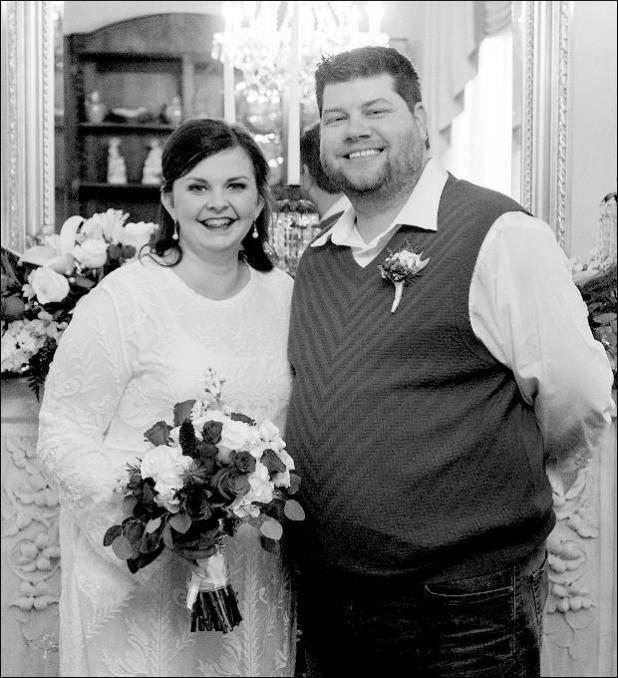 Mr. and Mrs. Will Forester

An intimate family gathering on New Year’s Eve, December 31, 2020, witnessed the marriage of Will Forester and Jessica Dawe. The couple were united in holy matrimony at White Pillars in Holly Springs, Mississippi at two o’clock in the afternoon, officiated by Minister David Webb.

Welcoming the guests in the front entry of the home was a photograph of the couple, a tall lantern trimmed with red and white roses along with a crystal bowl containing masks monogrammed for the happy occasion.

The bride was radiant in a long floral lace embroidered sheer overlay gown by Riane’. She carried a handtied bouquet of white and red roses embellished with winter greenery that included a photo charm of her late stepfather. Attending the bride as Maid of Honor was her nine year old daughter, Mylan. She wore a deep red lace embroidered tea-length dress and carried a mussy tussie with a miniature of her mother’s bouquet.

The ceremony was held in the formal living room in front of the marble fireplace whose mantle was decorated with two matching arrangements of red and white roses along with winter greenery, and a three piece antique brass and crystal girandole with 18 inch tapers. Gilded magnolia leaves and pillar candles filled in the fireplace.

After the exchange of vows and blessing the marriage, Brother David introduced the couple, then guests were invited to the formal dining room for the afternoon reception.

The beautiful bride’s cake was created by Brenda West of Mount Pleasant, Mississippi. The delicious cake was a four layer white cake with buttercream frosting piped with pearls around each layer and adorned with a double heart cake topper. Flowers matching the bride’s bouquet were tucked between the crystal cake plateau and silver platter.

The groom’s cake was a delicious treat made by Kristi Reid of Holly Springs. Held on a silver tray on the antique sideboard, the scrumptious single layer chocolate cake was festively decorated in Ole Miss colors that included a large raised M and scripted Hotty Toddy.

An assortment of the couple’s favorite small bites, fruits, cheeses, dips and beef tenderloin were served. The dining room table included a lovely center arrangement of red and white roses with winter greenery in an heirloom silver epergne with a three arm candelabra. The happy couple toasted with a clear punch using the groom’s parents wedding glasses.

In the home’s informal dining room, the dining table was adorned by similar wedding flowers arranged in a family heirloom silver epergne with a two arm candelabra. Also on the table was a vintage French gilt metal and beveled glass box for those in attendance to leave notes of best wishes and advice to the newlyweds.

In addition to the bridal party, joining for the special occasion were parents of the couple, the groom’s grandmother, the bride’s sister, brother-in-law and nephew, along with the groom’s sister, brother-in-law and nephew. While those physically present were kept to a small number due to the Covid-19 pandemic, the couple received many wellwishes before and after the ceremony.

Flowers were arranged by Lisa Childers and Patsy Floyd of Olive Branch Florist and photographer for the event was Claire Wise.

The couple are at home in New Albany, Mississippi.