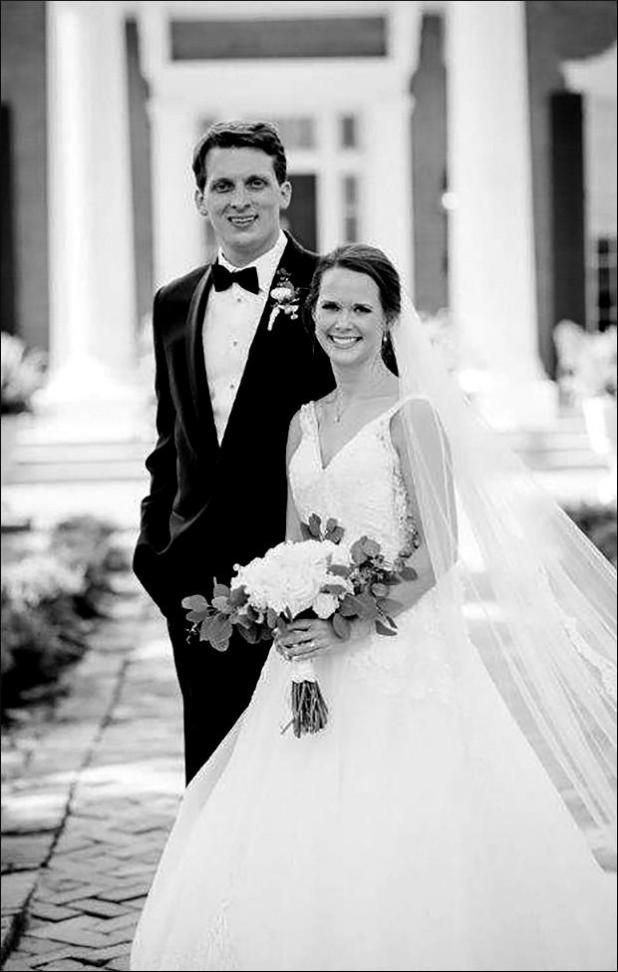 Miss Olivia Katherine Childers and Mr. Aaron Michael Fons were joined in marriage on the thirteenth of June at Walter Place. Mr. Terry L. Cook, who lovingly restored Walter Place to its original grandeur, graciously opened his home to the happy couple, fulfilling the bride's childhood dream of being married at the enchanting estate. The ceremony began at half past six o'clock in the evening in the intimate garden behind the home. God blessed the day with beautiful weather and cool breezes.

Serving as Maids of Honor to the bride were her two sisters, Amanda Baker Childers and Emily Berkheiser Childers. Serving as bridesmaid was Anna Grace Fons, sister of the groom. Serving as the groom's best man was Bradley Craig Edmonds. Groomsmen were Robert Paul Fons, father of the groom, and Jameson Layton Gay. Cherished childhood and college friends served as honorary bridesmaids and groomsmen. Mrs. Delories Taylor, a beloved friend of the family, was seated as an honored guest of the bride. Two very special guests to the happy couple served as ring bearers: Mr. Jackson Avery Childers, the much-loved dalmatian of the bride, and Mr. Rupp Fons, the equally loved rescue pup of the groom.

As a string trio softly played Can't Help Falling in Love, Dr. Childers escorted the bride down the aisle, passing the multi-tiered fountain bursting with exquisite Juliet garden roses, snap dragons, oriental lilies, and blushing hydrangeas. Before being presented in marriage, along with her wedding gown. Her Robin designer dress by Morilee featured a V-neckline with an A-line ball gown silhouette that complimented her natural waistline. A dramatic cathedral train veil enhanced with beading and scalloped Chantilly lace completed her ensemble.

The Reverend Joey Pusateri, pastor from the groom's hometown church in Danville, Kentucky, officiated the ceremony. Soloists Robert and Sharon Williams from the bride's home church performed a moving rendition of the Sager and Foster song The Prayer. After the exchanging of vows and blessing of the rings, Dr. Childers offered a moving prayer that had been shared at his own wedding to his wife, Sherry, thirty-eight years prior. Happy Days played as the newly minted Mr. and Mrs. Fons exited the ceremony and headed to the front lawn where guests enjoyed hors d'oeuvres and champagne toasts. The bride's parents invited all guests to join them for dinner and dancing in the side courtyard.

The wedding cakes were displayed in the formal dining room, surrounded by photographs of their parents and grandparents on their wedding days. The Bride's cake was an ivory, four tier creation with blush and spray roses nestled between each layer. The Groom's two-tiered cake displayed his love for country, state, and sports with logos of the Green Bay Packers, University of Kentucky, and Keeneland. When the cakes were cut, toasts were made with a special bottle of Kentucky bourbon that had been buried on-site a month prior to the wedding ceremony, following the southern superstition that doing so would ensure beautiful weather on their wedding day.

Walter Place looked magical as the courtyard glistened by the warm glow of candles and twinkle lights. The gazebo and reflection pool were surrounded by tables graced with beautiful florals and tall silver candelabras with garlands of greenery and candles throughout. The soft sail tent had a greenery and ivory draped entrance with large urns of ferns welcoming the wedding guests. Chandeliers offered a warm ambiance to the occasion. The band, Cutting Edge Dueling Pianos, from New Jersey, took the stage for a night full of dancing and celebration. The band had two baby grand pianos on stage with talented singers that featured Motown classics and modern-day hits. The bride and groom shared their first dance as a married couple to the Elvis Presley song The Wonder of You.

As the evening came to a close, the happy couple shared a final dance to Elton John's Your Song - the groom twirled his bride and dipped her with a kiss at the end of the song as a shower of confetti filled the dance floor. Guests then gathered in the front lawn to send the newlyweds off, igniting sparklers to light their way as they began their life together as husband and wife.

After a honeymoon in the Florida Keys, Mr. and Mrs. Fons returned to their home in Mountain Brook, Alabama.