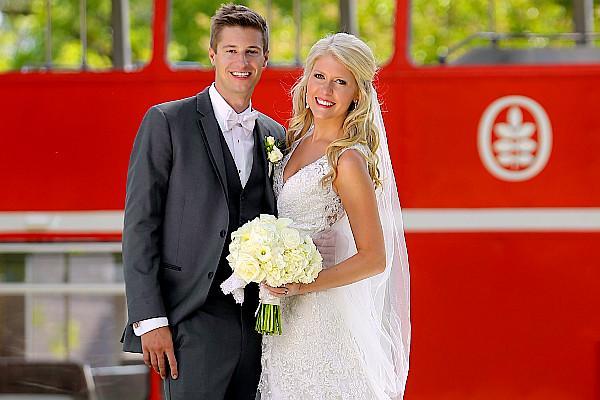 In the presence of family and friends, Ashley Lynne Forester and Glenn D. Wright were united in holy matrimony at half past six o’clock in the evening on Saturday, August 12, 2017, at First Baptist Church in Oxford.

Guests were treated to the musical piano arrangements of Mississippi’s Piano Man, Chip Templeton. The ceremony began with “A Lord’s Prayer,” written by the pianist.

Parents of the bride and groom proceded in to light the sidelights of the unity candle. The groom’s mother was beautiful in a plum lace and brushed satin gown and carried a rose nosegay. The bride’s mother chose a teal lace and chiffon gown and carried a rose nosegay wrapped with a lace handkerchief and teal jeweled broach in remembrance of her father.

The groom and his party, wearing charcoal tuxedos, entered to a special piano solo, a combined arrangement of “Ashokan Farewell” and “From Dixie, With Love,”  played by the groom’s mother.

The bride, given in marriage by her parents and brother, entered the sanctuary on her father’s arm to a melodic piano rendition of “Morning Has Broken.” The bride wore a custom, lace, sheath, gown from Allure Bridal. The V-neck gown was embellished with beading, pearls, and an illusion lace back which was echoed in a sheer, lace-edged train, all over an ivory charmeuse.

The bride’s custom veil was handmade by the bride’s grandmother, Margaret Hart. The bridal bouquet consisted of a nosegay of all white flowers of hydrangeas, O’Hara garden roses, mini callas, ranunculus, and freesia presented in a traditionally elegant round bouquet. Tucked within the bouquet were lockets with special remembrances of her late grandmother and both grandfathers. The bouquet was tied with the lace and button sleeves of her mother’s wedding gown. The bride carried an English lace handkerchief and wore a sixpence in her rose gold shoes, all gifts to the bride.

Attending the bride as maid of honor was Elizabeth Cottrell of Gulfport. Bridesmaids included Rebecca Colhoun, cousin of the bride from Holly Springs, Page Pelzer Jackson of Atlanta, Ga., Sarah Williams Renfroe of Birmingham, Ala., Brennan Pitts Forster of Nashville, Tenn., Anna Ray Snellgrove Hilburn of Montgomery, Ala., and Kelli Mendenhall of Brandon.

The bride took inspiration for the bridesmaid’s dresses and color selection from her love of her mother’s very own bridesmaid dresses from her parents’ wedding in 1984. The bridesmaids carried a beautiful nosegay of isle spray roses, white freesia, mini green hydrangeas, white hydrangeas, white O’Hara garden roses, and pink mondial roses. The flowers were framed with salal greenery and hanging amaranths. The hand-wrapped nosegays had long embellished ivory ribbons flowing from the bouquet, also mirroring her parents’ wedding. The bride’s proxy was Paige Adams of Jackson.

Standing with the groom as officiant and best man was his father, Rev. Douglas D. Wright. Groomsmen included Will Forester, brother of the bride of Starkville, Paul Hopper of Madison, Brandon Tynes of Chicago, Ill., Kyle Baker of Nashville, Cole Fowler of Oxford, John Miner of Ocean Springs, and Patrick Griffis of Philadelphia, Penn.

Ushers for the wedding were Alexander Aivazis of Columbia, S.C., Patrick Ayers of Little Rock, Ark., and Tyler Biggs of Oxford.

During the ceremony, friends of the bride, Mr. and Mrs. Robert Williams of Memphis, Tenn., sang a beautiful duet of “In This Very Room” and a special prayer for the ceremony was given by the grandfather of the groom, Rev. Jimmy Burks.

After leading the couple through their vows, a poignant blessing of the marriage was given by the groom’s father. The happy couple recessed to “Joyful, Joyful, We Adore Thee.”

Just a short walk from the church toward The Square, The Lyric was the site of a delightful reception hosted by the parents of the bride. Reception tables were decorated with gold, mercury glass, vase arrangements, tall candelabra arrangements of white hydrangeas, mixed blush and white roses with lush greenery accents of seeded eucalyptus, tree fern, variegated pittosporum, and salal. The arrangements were surrounded by romantic candlelit votives.

The entry included a legacy table with photographs in tribute to the lifelong marriages of the newlyweds’ parents and grandparents. In addition, a guestbook table held a family heirloom silver and glass epergne from the bride’s cousin, Bill Cline, recently widowed, in honor of his 50th anniversary.

Guests were escorted into a lovely reception hall romantically draped with ivory panels coupled with Edison and twinkle lights. After welcoming toasts and announcement of the bridal party, guests were treated to a Southern buffet of beef tenderloin, homemade rolls and spreads, potatoes with pesto, perfectly wonderful fresh tomato sandwiches, salad with signature vinaigrette, and a fruit and cheese table. Diane Greer and Maia Miller of Holly Springs once again outdid themselves catering the event.

The elegant bride’s cake was a luscious vision as the guests entered the reception hall. Created by friend Steve Stockton of Amory, the bride’s five-tier traditional wedding cake was intricately adorned with lace detail inspired by the bride’s dress, layered with blush roses, and set upon an heirloom silver plateau.

The groom’s table paid tribute to The Grove and the newlyweds’ tailgating group, The Over-Grovers. The beautiful cake was created by Sweet T’s Bakery of Oxford, and festively decorated with handcrafted tailgating tents and food, people, and the Walk of Champions archway.

The happy couple took to the dance floor for their first dance as husband and wife to their favorite band and song, “You and Me” by the Dave Matthews Band. Afterwards, father and daughter danced to Tim McGraw’s “My Little Girl.” During the dance the crowd soon teared up when the bride’s brother cut in to take his sister for a spin around the floor.

“You Are My Sunshine,” a song sung often to the groom as a child, was played for the groom’s special dance with his mother. Guests then joined in and danced the night away to the musical selections of The Dantones of Memphis.

At the request of the bride and groom, late night revelers enjoyed a festively designed Mexican buffet. After a special sign-off song by the band and a toast, the couple left through a fanfare of sparklers.

On the eve of the wedding, the bridal party took the short walk from the rehearsal to The Square where the groom’s parents hosted a delightful dinner and welcome party at Southside Gallery. The rustic- themed event included a delicious dinner catered by The Wine Bar.

Pictures of the bride and groom from birth to present were scattered among the tables which brought up many memories and toasts to the happy couple.

Earlier that day, a bridesmaids’ luncheon was hosted by Mrs. Dale Jackson of Holly Springs, at White Pillars, home of the bride’s parents in Holly Springs. A delicious luncheon of shrimp and grits was catered by Tyler Clancy of Clancy’s Café, among other treats.

Floral designs for the bridesmaids’ luncheon, rehearsal dinner, wedding and reception were created by Lisa Childers of Regal and Company of Holly Springs. Mrs. Childers also did a superb service as wedding coordinator. Capturing the special day was Pablo Corona of Pablo Corona Photography in Oxford.

After a two-week honeymoon to Cabo San Lucas, Mexico, and Costa Rica, the happy couple is enjoying their newly renovated home in Madison.

Ashley Forester was honored with a bridal shower hosted by her aunts, Mrs. Leland (Cindy) Passons of Biloxi, Mrs. Garrie (Sherry) Colhoun of Holly Springs, and Mrs. Bill (Jackie) Wilson of Brandon, at the lovely home of Mr. and Mrs. Garrie Colhoun on June 3, 2017.

Assisting with the shower were cousins Elizabeth Colhoun, Rebecca Colhoun and Margaret Wilson. The home was sweetly decorated in a bridal theme and the hostesses prepared a delicious lunch buffet including two varieties of quiche, fruit and yogurt parfaits, chicken salad and pimento cheese sandwiches, and roasted pecans.

The sit-down dinner included a variety of barbecue dishes, chips and dips, and sautéed vegetables. Homemade cakes and other delicious baked goodies were also enjoyed by guests, all of whom were instrumental in the groom’s childhood.

A beautiful garden tea party tablescape was created by the hostesses using multiple antique teapots and teacups, all with floral designs by aunt of the groom, Judy Brooks of Camden, Ark.

Special guests included family friends Bonita Mendenhall and daughter, Kelli, and Jackie and Margaret Wilson, aunt and cousin of the bride, all of Brandon,  and Judy Forester and Margaret Hart, mother and grandmother of the bride of Holly Springs.

Miss Forester was honored with a bridal shower by members of First Baptist Church in Holly Springs, on July 30, 2017, hosted by Mrs. Harry Smith Jr. and Mrs. Kyle Poole.

A delicious plate of petit fours, mixed nuts, fruit, cake, and punch was served. The fellowship hall of Ashley’s childhood church was festively decorated, and a tall McCarty vase with a beautiful arrangement of mixed summer flowers served as centerpiece and gift to the bride from the hostesses.