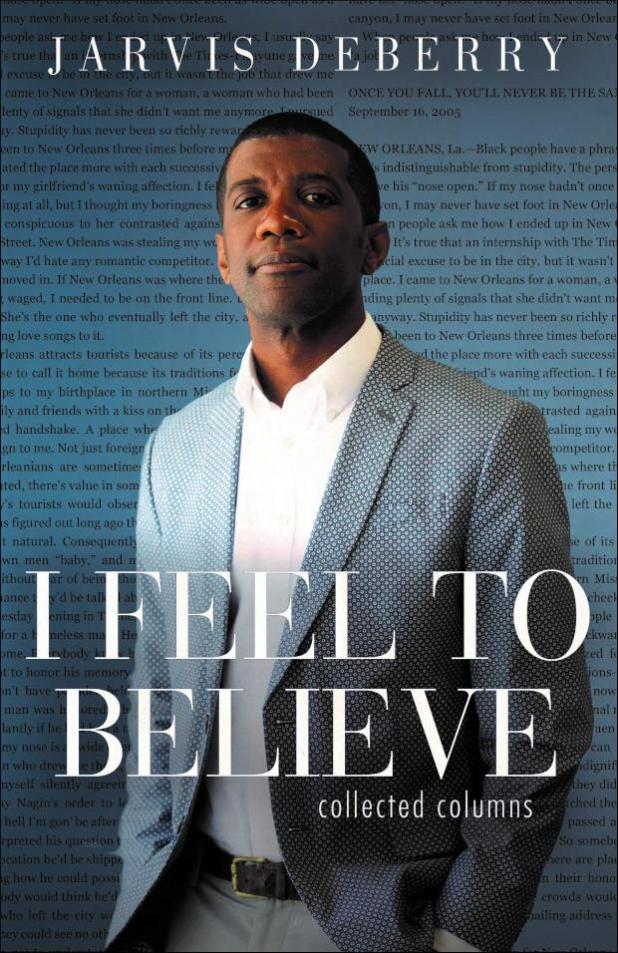 “My mother, the late Pennie Winfrey DeBerry, was correcting my grammar even as I learned to talk and every editor I’ve ever had can thank her for her fastidiousness. She was my first and best English teacher, and she and my father, Melvin DeBerry, always made me feel like I could compete with anybody.”

Jarvis DeBerry, in the acknowledgments at the front of his new and first book, “I Feel To Believe,” writes fondly of his family, and others in his hometown of Holly Springs, who were instrumental in making him the Pulitzer Prize winner that he is.

DeBerry was one of the team of journalists for NOLA.com/The TimesPicayune awarded the Pulitzer Prize for Public Service for its coverage of Hurricane Katrina and its aftermath. He’s also a five-time winner in the annual contest sponsored by the Louisiana/Mississippi Associated Press Managing Editors Association and two-time winner of the National Association of Black Journalists’ Salute to Excellence Award.

OK, enough of Jarvis’ many awards and his general excellence. Many in Holly Springs remember Jarvis well, and he’s related to about half of the city. Born and reared in Holly Springs, Jarvis followed an old girlfriend to New Orleans, La., after college. She left, and he remained as a cub reporter for The TimesPicayune newspaper. His book is a collection of the columns he wrote during his 20 years there, including many of the aftermath of Hurricane Katrina.

He got his first taste of newspaper ink at The South Reporter as a summer intern. He came to the job with the plan of going on to college in maybe the medical or even engineering fields. He left us and went off to college with printer’s ink in his blood and never looked back.

As I read his book, I could just envision the extremely intelligent teenager we knew and be so happy at how wonderfully well he has done.

Many of the columns in his book are about Katrina and the aftermath. Many are heart-wrenching, such as the one he wrote about the first Sunday “after” when he went to his church and cried for the first time.

One that particularly touched me was where he talked about packing all his irreplaceable stuff up to take with him as he left his home before landfall and then his first visit back to see what was left.

“I remembered Thursday night that behind my bedroom door were two quilts my grandmother had made for me. I felt bad for having told friends that I had removed everything that was irreplaceable. I hadn’t. I’m guessing that many folks are going to return to their destroyed structures and realize they hadn’t either.”

In an interview printed at the end of his book, Jarvis remembered the first column he wrote post-Katrina. He mentions seeing a second line going down (a New Orleans after-funeral parade-type of family and friends). It was for a homeless man who’d been found behind a funeral home.

“I remember the thought of a community holding a parade for a homeless man. That so fascinated me...”

In the introduction, James Arnoss, former editor of The Times-Picayune, speaks fondly of meeting Jarvis.

“In the summer of 1997, we hired him. He came across as curious and shy, with an irresistible smile and flashes of a wicked sense of humor.”

It’s been more than 20 years since Jarvis left The South Reporter and went on to become the man he is. Married now, he and his wife Kelly have a daughter, Naomi. They come to visit family and friends in his hometown, but he loves his adopted city of New Orleans. He is now the editor of the Louisiana Illuminator.

His book of collected columns of before, during, after and onward, shows his heart and soul in a wonderful way. He totally surpassed everything we knew he had in him.

“I Feel To Believe” is published by University of New Orleans Press and is available on Amazon.

Linda Jones of Laws Hill is a former staff writer for The South Reporter. She is retired but continues her weekly column.