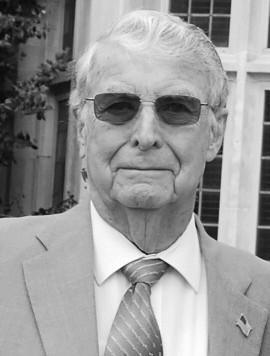 Funeral services for Mr. Carden were held at 3:30 p.m. on Saturday, March 9, 2019, at the Peebles West Funeral Chapel at Oakland. A private interment was in the Somerville City Cemetery. Arrangements were provided by Peebles Fayette County Funeral Homes & Cremation Center ­ West Chapel at Oakland.

Harold was born August 9, 1929, in Bemis, Tenn., the son of the late Joseph Newton Carden and Annie Yates Carden. He was a graduate of South Side High School in Jackson, Tenn., and served his country in the United States Navy. He was employed as a branch manager for Coca-Cola for many years before his retirement. Harold was married February 6, 1954, to the former Eva Nell Treadway, a native of Rossville, Tenn., who preceded him in death on October 3, 2015, and was a member of Holly Springs church of Christ. He was a member of Woodmen of the World and the Coca-Cola Collectors' Club and loved collecting Coca-Cola memorabilia, gardening, golfing, camping and special times with his wife and family.

Those honored to serve as pallbearers were Wayne Weaver, Dale Treadway, Tate Miller and Fred Carlisle.

Condolences may be left on our online guestbook at www.PeeblesFuneralHome.com.