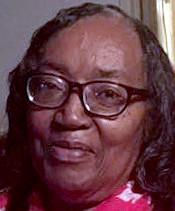 Dorothy Ann Franklin Griggs, 68, of Holly Springs, died June 15, 2018, at Ashland Health and Rehab. She was a member of Williams Temple COGIC in Moscow, Tenn. She was on the Mother Board, a member of the church choir and was chairperson for the Pastor’s Aide Committee. She was a former cook and manager of Hardee’s in Collierville, Tenn.

Services will be held at 10 a.m. on June 23 at Sims Chapel MB Church in Michigan City. Burial will be in Williams Temple COGIC Cemetery in Moscow. Elder Robert Williams will officiate. J.F. Brittenum and Son Funeral Home is in charge of arrangements.

She was preceded in death by a son, Bobby Griggs.