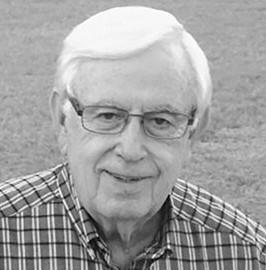 Aubrey Wilson, 86, was born in Florence, Alabama, on October 4, 1932. He passed away in his sleep on January 7, 2019. Aubrey grew up in Holly Springs, Mississippi. He committed his life to Christ in baptism at the age of 12, and lived his entire life devoted to the Lord, having served as a deacon at both the Kimball Avenue and Quince Road churches of Christ. In recent years, he was an active member at the Germantown church of Christ.

Aubrey served four years in the U.S. Navy, stationed aboard the USS Cavalier, and was a veteran of the Korean War. Upon an honorable discharge in 1955, he enrolled at Freed-Hardeman College where he met his wife of 61 years, Barbara Kent Wilson of Henderson, TN. He saw her for the first time as he stopped to get a drink of water and would say he knew at that moment he would ask her for a date and would someday marry her. After two years of courtship, they married and even in his final days he still called her "his bride."

Aubrey worked for Parts, Inc. for thirty-eight years as a sales representative. His easygoing and likable disposition made him a natural at sales. Prior to his retirement, he earned the company's highest national honor of the Silver Eagle award.

A memorial service was held at 12:30 p.m. on January 12, at Germantown church of Christ. There will also be a graveside service on January 19, at 11 a.m. for friends and family in Henderson, Tenn., at the Henderson City Cemetery. In lieu of flowers, the family requests donations to the Germantown church of Christ Mission Fund at 8723 Poplar Pike, Germantown, TN 38138, or the Baptist Centers for Good Grief at 350 N. Humphreys, Memphis, TN 38120.

Memorial Park Funeral Home and Cemetery is in charge of arrangements.