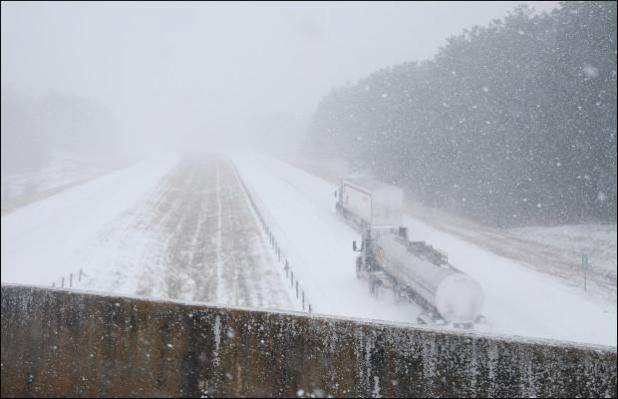 Photo by Barry Burleson
Two trucks move slowly west on Interstate 22 near Holly Springs Monday afternoon as a steady mixture of ice and snow continue to plummet the area. 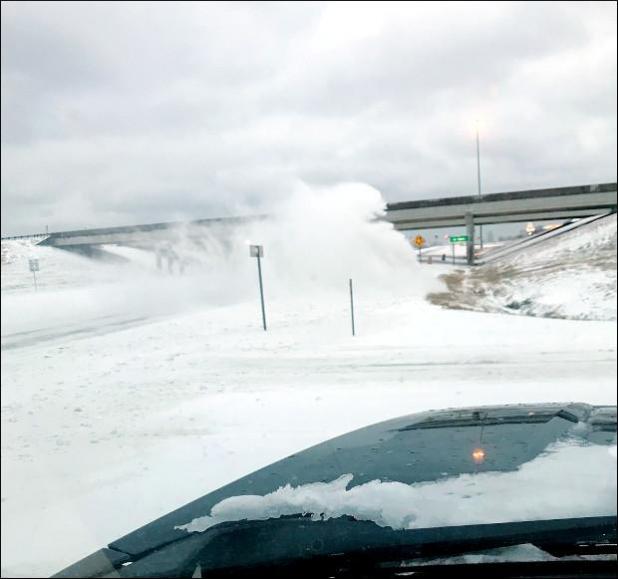 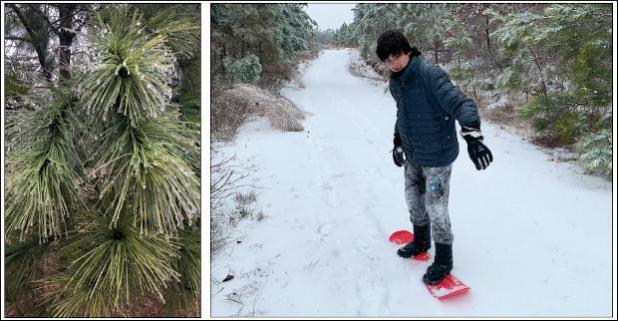 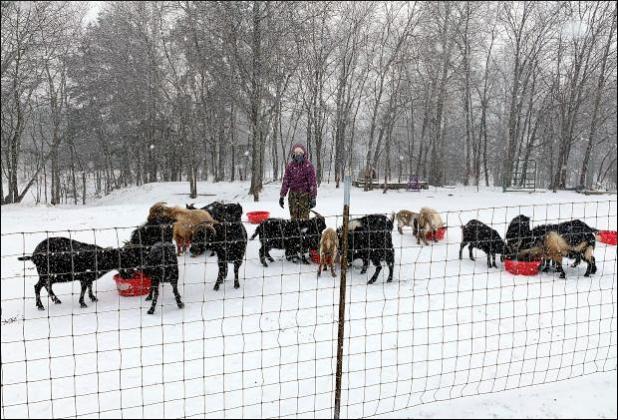 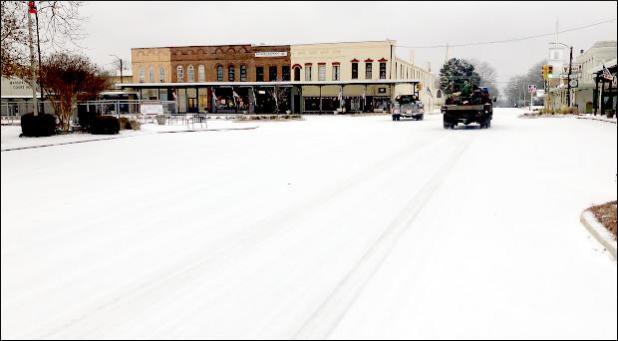 Photo by Barry Burleson
A couple of vehicles make their way around downtown Holly Springs Monday about 8 a.m. 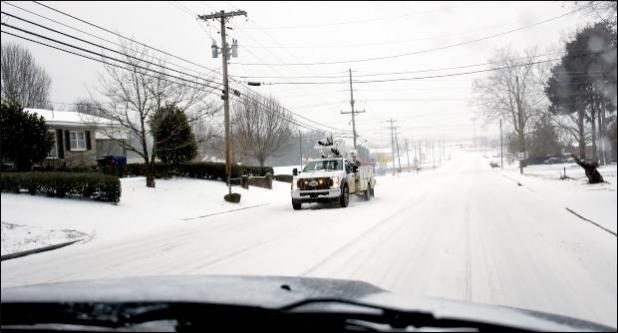 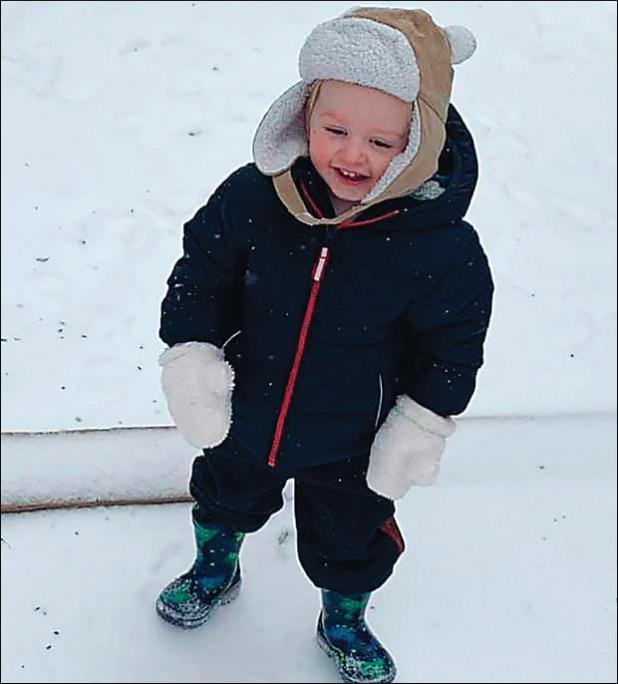 Courtesy photo
Chase Feathers of Red Banks is happy as he plays in the snow.

Little did anyone expect when Punxsutawney Phil saw his shadow February 2, that the six more weeks of winter would include extreme winter weather conditions over the Mid-South.

The first wave came through last week in the form of ice, affecting electricity in parts of Marshall County.

Road conditions were hazardous in some spots Thursday, Feb. 11, and lots more treacherous across a widespread area beginning Sunday, Feb. 14, when the second wave of freezing conditions set in. That blitz of winter weather brought lots of sleet and snow with temperatures dropping as low as 2 degrees early Tuesday morning, wind chill less than zero.

County road manager Larry Hall said his foremen began salting intersections, bridges and slopes Sunday afternoon and went back out early Monday to apply more salt. He said he does not know how much the salt is going to help because of the mix of ice and snow on the roads as precipitation starts in an off and on again fashion over several days.

Cayce Road at Highway 302 is a dangerous intersection, he said.

Snowfall amounts varied countywide from 2.5 to 5 inches. The worst was in the northern part of the county along Highway 72. Accumulation was greatest from the Cayce and Mt. Pleasant areas to the DeSoto County line, he said.

There were no big problems with downed limbs in the roads. That was more of a problem on Thursday, Feb. 11, he said.

Maj. David Cook with the Marshall County Sheriff’s Department said there had not been many accidents since Sunday other than some vehicles losing traction and slipping off the road.

Power outages The Holly Springs Utility Department had several large outages during the Thursday, Feb. 11, event, according to general manager Bill Stone. One affected the Highway 178 West area to Red Banks and Victoria. Most outages were restored in the Red Banks Road, Gardner Road and Victoria Road areas fairly quickly, he said. But a second outage in the 64 KV Feeder line to the Slayden Substation took down the substation for over an hour. Areas affected included Slayden, Early Grove, Lamar and Clear Creek. Another outage late Thursday affected customers in the Hebron Church Road, Curtis Road and Jeffries City Road areas. Other small scattered outages occurred but most customers affected were located in Marshall County, primarily north and west of Holly Springs, Stone said. HSUD reported 150 customers out in the Mt. Pleasant area Monday morning of this week at 9:40. Northcentral reported the following outages starting with the first wave February 11. First outages were reported February 11 at 6:31 a.m. With 530 meters out due to weather conditions. By 7:25 a.m., numbers had climbed to 895 in its eastern service area. At 9:31 a.m., 32 cases included 1,140 members without power, mostly in Marshall County.

The number of outages decreased throughout the day. At 1:06 p.m., 15 outage cases had 218 members without power.

That number declined to 84 by 2:38 p.m. With 84 members without power in five separate cases.

Michael Bellipanni, director of marketing with Northcentral, said Northcentral started getting calls around 6:15 a.m Monday, Feb. 15, with a total of 1,890 members without electricity.

The cause, as referred to earlier, was a broken pole on Cayce Road that was caused by the weight of ice accumulation and its attachments.

“Through some switching, we were able to quickly restore all but 94 members that were directly served with that pole,” Bellipanni said.

By 12:30 p.m., the three crews on the job had replaced the pole and were working to get the attachments and lines back on. Shortly after 4 p.m. Monday, crews had restored power to all.

“This was a very difficult repair, especially considering the bitter temps and snowy conditions,” he said.

Mississippi Department of Transportation continued to urge drivers to stay off the roads due to icy conditions across the state.

“Our crews are working around the clock to keep highways passable, but the cold temperatures and precipitation are working against them,” said Melinda McGrath, MDOT executive director, in a press release Monday afternoon.

“The best thing for drivers to do is to stay home if at all possible.” More snow and ice are predicted for Wednesday and Thursday of this week.