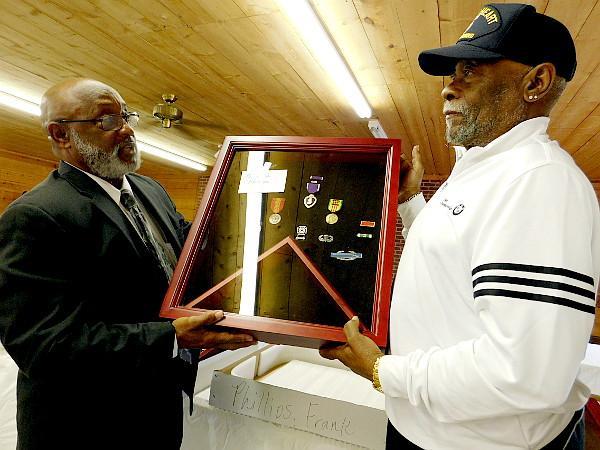 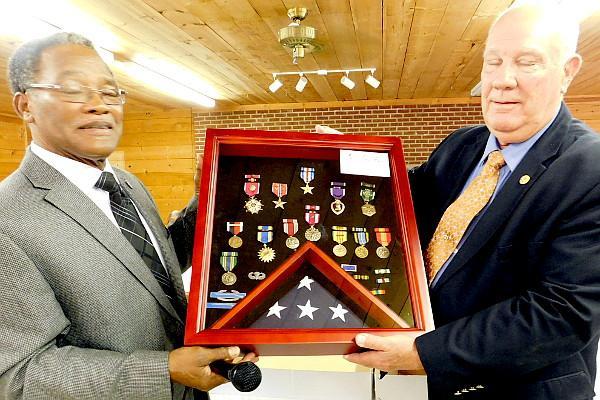 District 2 supervisor Eddie Dixon presents retired Col. Roy Ray with a shadow box containing all his medals and with a U.S. Flag that was flown over the Capitol in Washington, D.C. 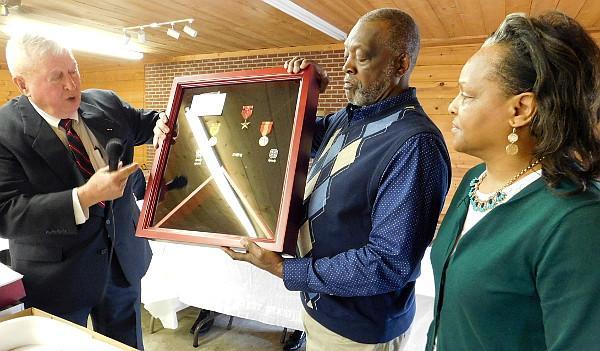 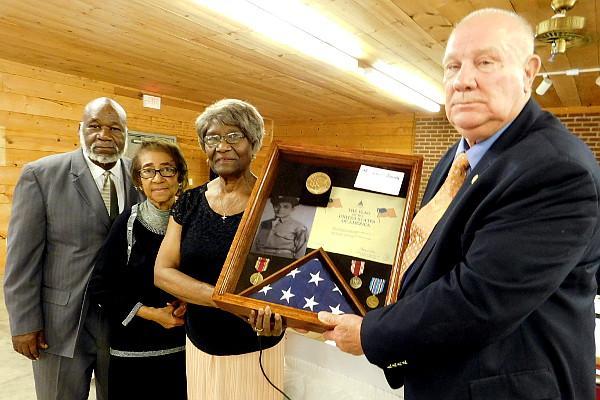 Nellie Smith accepts the shadow box in memory of her late husband Levi Smith. Roy Ray presents the  shadow box while Minister F.H. Brown and his wife Emma watch on.

A group of veterans from Marshall County were honored for especially meritorious military service at National Vietnam Veterans Day ceremonies in Byhalia March 29.

It was exactly 44 years ago on March 29, 1973, when the last of the American troops withdrew from Vietnam during President Richard Nixon’s administration.

However, in an attempt to honor those who served in Vietnam, Congress passed the Vietnam War Recognitions Act (S.305). The bipartisan bill was approved by the Senate on February 8 and by the House on March 21. President Donald Trump signed the bill on Tuesday, March 28, and the first celebration took place Wednesday March 29, 2017.

Retired Marine Bill Fitts, who helped conduct the program, said he returned to California after his first tour of Vietnam in 1965, and was called a baby killer and rapist when he entered the airport in California.

Other veterans had balloons filled with red ink thrown at them, he said.

Fitts called it “a dark part in our history.”

After two tours, Fitts returned and said veterans were overlooked too long. Some were drafted and had no choice but to go to Vietnam, he said.

“Celes Tucker is doing a great job as our veterans service officer,” he said. “She’s well qualified. The VA is slow. Go see what services they have.”

The ceremony was held in the Community Building in Byhalia, with elected officials presiding, including members of the Marshall County Board of Supervisors and Town of Byhalia. Also assisting was Ray Gallagher and pastor Gary Adams and Col. Bill Fitts.

Supervisor Keith Taylor, who helped organize the event, was unable to attend due to illness.

Retired U.S Army Col. Roy Ray was awarded the Silver Star for gallantry in action, for heroic action in a battle in Vietnam. During the search and destroy operation, his unit came under intense mortar and automatic weapon fire and he was wounded in the leg and chest. While his unit was pinned down, Ray directed helicopter gunships and a reinforcing Vietnamese cavalry troop. Ray received many awards, including the Silver Star (the third highest award), the Bronze Star, the Oak Leaf Bronze Cluster, the Letter V Device and the Purple Heart.

Ray served 29 years and was also a paratrooper.

Ray said servicemen and servicewomen serve on a team and the families and communities who support them are a part of the team, as well.

“I accept this recognition on behalf of these teams, absent and present, both on the battlefield and at home,” he said.

His service didn’t stop when he came home. He most recently is helping lead the Rotary Club’s Family Youth Initiative.

The late Tuskegee Airman, Levi Smith, served in World War II with the U.S. Army. Smith received the Congressional Gold Medal of Honor in 2007, the highest award Congress can give. Over 1,000 Tuskegee Airmen were trained as an all-black unit of pilots that served in Europe, North Africa and the Mediterranean. They protected bomber groups and it is said fought two wars, winning World War II but not completely winning the battle of prejudice and discrimination back home.

His widow, Nellie Smith, said her husband was proud to be a pilot in the Tuskegee Airmen and he was proud to have served his country.

The late John Byrd Going Jr. was honored for service in the U.S. Army in World War II, from December 4, 1941, until October 29, 1945. He fought in the battles of Normandy, in Northern France, the Rhineland, and Central Europe. He received the Purple Heart for wounds received November 30, 1944, and the Bronze Star for Good Conduct. He distinguished himself in combat and was wounded during the process.

“He was a good soldier and a good man,” said his wife Waurene Going.

Skelton was evacuated after his vehicle was hit by an anti-tank rocket.

For his valor, Skelton was presented the Bronze Star and Letter V Device and the Purple Heart.

Ralph Billy Dowell served in Vietnam from 1967 to 1968. His last assignment was with Company B, First of the 327th Airborne Battalion in the 101st Division. He was awarded the Bronze Star, the Vietnam Campaign Medal and the Army Commendation and other decorations.

Sgt. Dowell, who referred to himself “a Yankee from Connecticut,” now lives with his wife Linda Faye in Marshall County.

Sgt. Eddie Frank Jones served in the U.S. Army in Vietnam from January 1970 to November 1970. He faced military operations against an armed hostile force. He received the Bronze Star for outstanding service over 11 months and for his initiative, integrity and exemplary devotion to duty in keeping with the highest traditions of military service, bringing credit upon himself and his unit and the U.S. Army.

Henry Harol Ash fought with the U.S. Army in Vietnam from 1967 to 1969. He was awarded the Purple Heart for wounds he received during combat operations. Ash also was awarded the Vietnam Service Medal, the Army Commendation Medal and other awards and decorations. He was a sharp shooter with the M-14 rifle and expert marksman with the M-16 rifle.

Donal Coy Bishop served in the U.S. Army in Vietnam from 1967 to 1969. He fought with the 169th Engineering Battalion and was awarded the Purple Heart, the National Defense Service Medal and other decorations. He was expert with the M-14 rifle.

Franklin Delano Phillips served in the U.S. Army in Vietnam from 1967 to 1970. His last assignment was with the 5th U.S. Army. Phillips was awarded the Purple Heart, the National Defense Service Medal, the Vietnam Service Medal, the Parachutist Badge and earned the Combat Infantryman’s Badge for his mastery of infantry skills, including expert use of the M-16 rifle.

Celes Tucker, with the Marshall County Veterans Service Office, worked tirelessly to obtain the shadow boxes and medals for this celebration to arrange this ceremony honoring veterans and their families.

Special thanks was given to U.S. Sen. Thad Cochran who provided the replacement medals, and to U.S. Rep. Trent Kelley who obtained flags to go in some of the shadow boxes through the “The Flags Over the Capitol Program.”