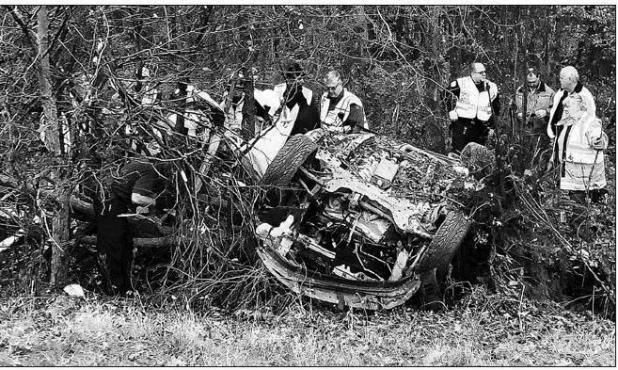 Photos courtesy of Marshall County Sheriff’s Department
Marshall County emergency personnel (above) work the crash scene on Interstate 22. Pictured are the victim’s vehicle (above) and the stolen car (below) that was being driven by one of the suspects.

Two women are in custody after fleeing from law enforcement officers on I-22, resulting in two crashes and one death, according to Sheriff Kenny Dickerson.

Their arrests have also exposed a car theft ring originating in Florida, he said.

“According to my sources in law enforcement, it is believed that the vehicle, going eastbound in DeSoto County, was traveling well in excess of 100 miles per hour,” he said.

The suspect’s car entered a curve in Marshall County near the Stonewall Road Bridge over I-22, still traveling at 100 miles per hour or more, Dickerson said, and then hit a vehicle driven by a Panola County woman. Both vehicles left the road.

The 51-year-old woman from Batesville, Lisa Gay, a nurse, was pronounced dead on the scene, according to coroner James Richard Anderson.

The suspect who was involved in the crash got out of her wrecked car and into a car driven by a second suspect who was following along behind. At some point between there and Union County, the driver of the first wrecked vehicle, Tae’ona Edmonson, 22, of 627 NW 1st Terrace, Cape Coral, Florida, took over the wheel of the second vehicle previously being driven by Tanairy Portal, 18, of NW 96 Street, Miami, Florida, according to the sheriff.

The pursuit of the second vehicle came to an end in Union County after Mississippi Highway Patrol officers and agents with the U.S. Marshals Service took over the pursuit.

West of New Albany, the suspects’ vehicle left I-22 and was intercepted by a state trooper.

Shortly thereafter, the vehicle rammed the trooper’s car, and the two female suspects were taken into custody, Dickerson said.

The trooper was treated at the hospital for his injuries and released.

The vehicle that had been driven by Edmonson in the first accident had been stolen out of Georgia, he said.

“As the result of the continued investigation by Maj. David Cook, Maj. Kelly McMillen and I, along with Mississippi Highway Patrol officers and officers in New Albany, investigative data revealed that the two females were part of a seven-person car theft ring that had come to Memphis, Tenn., with the intent to steal vehicles,” the sheriff said. “Six stolen vehicles had already passed through all jurisdictions. The suspect’s (Edmonson’s vehicle) was going to be one of seven vehicles in a line of stolen vehicles.”

Dickerson said the vehicles were brought to a hotel near the airport in Memphis for the suspects to drive back to Florida.

“It is highly likely the suspects were working with accomplices in Memphis who would take the vehicles to the hotel to be driven to Florida,” the sheriff said.

The following vehicles had been taken – a Dodge Charger; two Chevy Trucks, one gold and one silver; a black van; a black Mercedes Benz; a silver Infinity; and a grey Jeep Cherokee.

On Friday afternoon, Portal was picked up at the Union County Jail by deputies with the Marshall County Sheriff’s Department and transported to Marshall County for the purpose of being charged in connection with the fatal accident on I-22, Dickerson said.

Portal is charged with accessory to second-degree murder and accessory to leaving the scene of an accident where a fatality occurred.

Portal was charged with disorderly conduct and breach of the peace by Union County Sheriff’s Department, Dickerson said.

Monday morning, Marshall County deputies returned to New Albany and transported Edmonson to the Marshall County Justice Complex for the purpose of being charged in regards to the fatal accident on I-22, he said.

Edmonson is charged with second degree murder as the result of the fatality and also with leaving the scene of an accident.

He said in Union County, Edmonson is charged with two felonies – one count aggravated assault on a police officer in the line of duty and one count felony fleeing. She was also charged with driving without a license, improper lane change and one count of seatbelt violation.

“Majs. David Cook and Kelly McMillen and I are continuing to work with agents with the Mississippi Highway Patrol and the District Attorney’s Office in regards to these crimes,” the sheriff said.

Edmonson and Portal were arraigned Monday afternoon in Marshall County Justice Court on the charges previously mentioned. Edmonson is being held on $1 million bond, and Porter on $500,000 bond. Both suspects remain in the Marshall County Jail and will most likely remain here, Dickerson said, “because the main offense, the fatality, occurred in Marshall County.