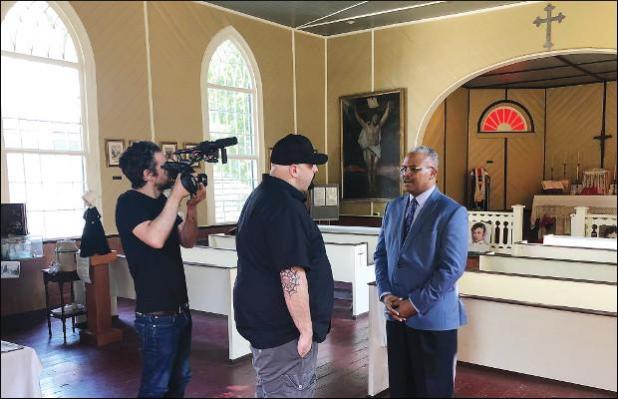 Holly Springs’ history of hauntings and other paranormal activity has attracted Hollywood to North Mississippi.

“We really felt that the activity in the house when we first arrived was intended as a test to see if we had the mettle to stick it out and stay in the house,” Humphreys said. “The level and intensity of the paranormal activity were overwhelming, intimidating, and at times, downright scary.”

After Linden Hill was included on the 2018 Haunted Holly Springs tour and was the subject of two articles in the Clarion-Ledger, producers from Ample Entertainment contacted Humphreys, Smith and local historian Phillip Knecht.

After several months of planning and research between Travel Channel producers and Humphreys, Smith and Knecht and other local officials, the crew from the Ample Entertainment production company arrived in Holly Springs and set up their headquarters at the Wynne House Inn and Southern Eatery.

As the camera crews filmed from 4 p.m. until early the next morning, the only available times for the crew to eat in Holly Springs was late at night. Southern Eatery owners Tom and Linda Stewart graciously offered to cater late-night “lunches” for the crews.

“The production crew was amazing to work with, and very down-to-earth and professional,” Tom Stewart said. “They were what we would call ‘folks’, and I’m looking forward to seeing them again.”

The host of the show, Steve Shippy (more famously known as the rapper “Prozak”), along with producers and camera crew, filmed at several locations in Holly Springs, including Linden Hill, the Marshall County Historical Museum, the Yellow Fever Martyrs Museum and Hill Crest Cemetery. The crew also visited other wellknown Holly Springs landmarks, such as Graceland Too, the Holly Springs Square, the Mississippi Industrial College and Airliewood.

“Visiting this beautiful historic (and haunted) town has been a pleasure and a highlight for us on this first season,” said segment producer Will Miller. “Thank you to all of the great and kind people who we met here.”

Recent Marshall Academy graduate Cyrus Pearl was hired as the local production assistant for the shoot.

“Working on this episode has been amazing,” Pearl said. “This group of guys has been very welcoming and kind towards me, and has certainly made this an experience of a lifetime. I have been very lucky to work with these radical guys.”

Everyone who interacted with the production crew enjoyed the attention from Hollywood.

“Working with Steve Shippy and the production team has been simply amazing. These guys worked hard, kept long hours, and endured the ‘wonderful’ heat and humidity of Mississippi,” Humphreys said. “Steve was the consummate professional who was understanding, knowledgeable, and above all, compassionate.”

The Holly Springs episode of “Hauntings in the Heartland” is scheduled to air in January 2020.