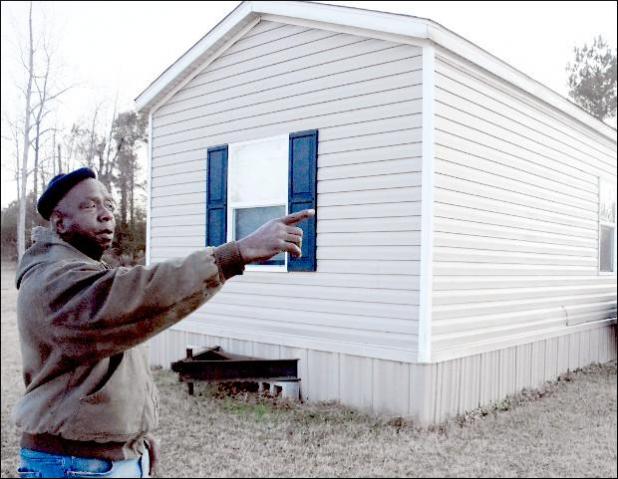 Photo by Barry Burleson
Charles Hoey, beside his mobile home that replaced the one destroyed in the tornado five years ago, points to a small shed on his property that was hardly damaged in the twister. He lives on Old Highway 4 West near HollySprings.

Charles Hoey planned to go straight home after work December 23, 2015, to prepare for some Christmas cooking.

He left his job in Byhalia on the warm winter day and saw clouds darkening in the distance.

“Something told me not to go to my house,” Hoey said. “I went to Holly Springs where my friend works and stayed awhile.”

A little later, he decided to go to his residence on Old Highway 4 West.

He got to the service station in front of Walmart. His truck started shaking and he could see debris in the air.

“I couldn’t get through,” he said. “I realized I probably didn’t have a home.” Later that night, he managed to almost get to Beverly Chapel C.M.E. Church. Hoey, 66, has been a member of that church all his life.

“One of my fellow church members, the tornado blew the roof off his house and he was still in the house,” Hoey said. “I went to help get him out of the house.”

Then he reached what was left of his mobile home. It was totally destroyed.

“There was a tree right through my trailer,” he said. “I thought, `Lord, I would have been in there if my mind hadn’t told me to go to Holly Springs.’ It was praying time.”

He said he was able to salvage only one or two items from his home.

Someone asked Hoey — “How do you feel?”

“I told them, `it’s not in my hands. I am blessed to be here.’ “ He stayed at his niece’s house a few weeks before getting a new mobile home on a piece of nearby property, not exactly where the other one was located.

“It seems like yesterday,” he said. “Every time it clouds up and there’s bad weather, it brings back all the memories.”

The Beverly Chapel C.M.E. Church building was also leveled by the tornado. Benel Pegues, 69, another

longtime member of the church, lives in town but made his way out Old Highway 4 West the morning after the tornado.

“It was a shock — upsetting — to see the whole church building flattened,” Pegues said.

A propane gas tank from the church property was found about 300 yards away.

Church members were unable to save anything from the building.

“Nothing — everything was destroyed,” he said.

The church met temporarily in a vacant church building on Highway 4 West near Galena School.

Meanwhile, with a lot of assistance, the building on Old Highway 4 West was rebuilt. It was finished about a year after the tornado, and a dedication ceremony was held February 12, 2017.

“It felt good to be back,” Pegues said. “We had a big crowd that day.”

Ephesians 2:19-22 — “Now, therefore, you are not longer strangers and foreigners, but fellow citizens with the saints and members of the household of God, having been built on the foundation of the apostles and prophets, Jesus Christ himself being the chief cornerstone, in whom the whole building, being fitted together, grows into a holy temple in the lord, in whom you also are being built together for a dwelling place of God in the spirit.”