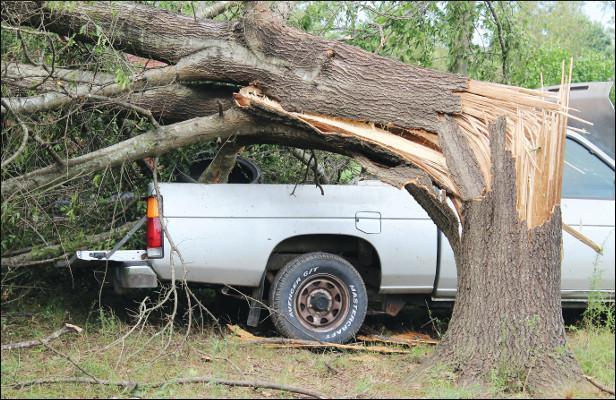 The storm that blew through the Victoria area last week was officially rated as an EFO tornado with 80-85 mile per hour winds, according to Hugh Hollowell, emergency management coordinator for Marshall County.

It stayed aloft and was not known to have touched the ground.

The path of the July 16 storm was seven to eight miles long, he said, and tracked to the northeast beginning with a tree down at Woods Road and ending at Moore Road on the north side of I-22.

“I don’t think it ever totally hit the ground,” Hollowell said. “It was ominous looking but didn’t appear as destructive as a normal tornado. The damage turned out to not be as bad as we thought.”

Some people had serious damage from trees falling on their homes, some shingles were stripped off rooftops and a church at the corner of Victoria Road and Friendship Road had damage to the metal roof, Hollowell said.

Red Cross came out the day of the storm and the following day, Wednesday, July

17. They took some names and addresses. The Baptist Disaster Response Teams sent members from surrounding counties to help with cleanup of trees and debris.

Many volunteers from local law enforcement agencies and fire departments turned out from over the county – particularly from Byhalia and Holly Springs. Ricky Butler and his helpers put tarps over roofs that might have taken in rain after roofing mater

ials were stripped off, Hollowell said.

Holly Springs Utility Department had several spans of wire down and some broken poles, according to general manager Bill Stone.

“We had all that along Highway 178 back together before dark,” Stone said. “There were a few isolated outages left that the call crew took care of after that.”

Michael Bellipanni, director of marketing and business development at Northcentral Electric Power Association, laid out the timeline and events taking place Tuesday of last week when the tornado came through.

“Troubles began when we lost some circuits in our East Cox Substation at around 12:20 Tuesday afternoon, which left about 1,000 members without power,” he said. “At the same time, another 160 members lost power due to storm damage in the St. Paul, Friendship, and Skating Rink road areas. Our crews and contractors worked throughout the afternoon clearing trees and replacing four broken poles and three transformers. Several spans of line were put back in the air, and most all members who could receive power were restored by 8:30 that evening.

“A couple of homes received damage that required an electrician for us to safely reconnect them, but they got those services the next day. We were very fortunate that the property damage was concentrated and not as severe as it could have been.”