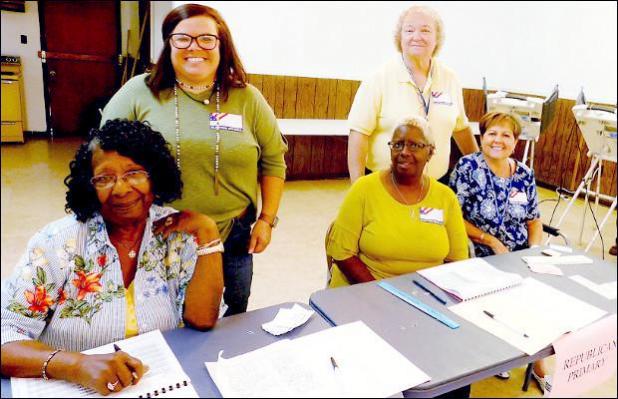 Photo by Sue Watson
Poll workers ready for voters Tuesday morning at Waterford are (from left) Elmira Marion, Leanne Stacks, Gloria Marion, Karen Green and Penne Robinson. By 10 a.m., 95 had voted. There are about 700 registered in the precinct.

A pair of incumbents in countywide races cruised to victory in Tuesday night’s Democratic Primary.

Chuck Thomas was reelected to his fifth term as chancery clerk, getting 67.91 percent of the vote.

Kenny Dickerson was reelected to his seventh term as sheriff, getting 58.21 percent of the vote.

There will be runoffs in a few races, including circuit clerk. Monet Bell Autry and Patricia Penilton Glass will meet in the August 27 Democratic Primary Runoff. Autry received 31.89 percent of the vote and Glass 29.21 percent.

Circuit clerk Lucy Carpenter is not seeking re-election. She is wrapping up her 11th term (44 years).

Unofficial totals from the August 6 Democratic Primary include:

Some unopposed candidates were also on the Democratic Primary ballot, plus some statewide and other district races. The county favored Jim Hood for the Democratic nomination for governor.

Local candidates on the Republican Primary Election ballot were unopposed.

There were competitive races on the Republican Primary ballot for statewide races like governor, lieutenant governor and attorney general, plus transportation commissioner. The county favored Tate Reeves for the Republican nomination for governor.

Holly Springs native Lynn Fitch had a pair of opponents in the Republican primary race for attorney general. She got 44.66 percent of the vote in her home county.

Voter turnout in Marshall County for the primary was low – 38.29 percent.

Carpenter said the election process went well, with the exception of some confusion over voters selecting either a Democratic or Republican ballot.

Runoffs, Democratic and Republican, are August 27. The General Election is November 5.