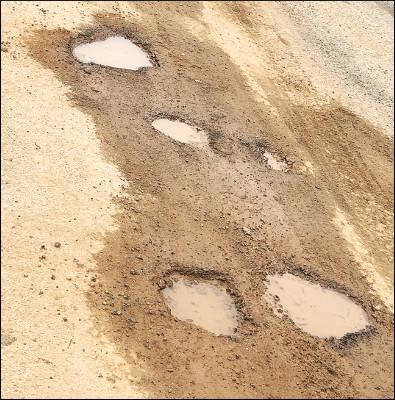 Courtesy photo
Pictured are a few of the potholes leading to the subdivision.

They live in the county but go in and out of their subdivision over a private road, partially in the city and built by Jakie Hurdle.

Flora Isom-Marion said those who use the road are tearing up their vehicles. There are potholes down the middle of the narrow road and now along the sides as well, as drivers have sought to soften the blow by driving on the shoulders.

There were two residents living in the subdivision when the Marions bought their home there about eight or nine years ago. At that time Hurdle had not built his road and they came in from the Highway 7 North entrance, Isom-Marion said. Since then that entrance, which was also private, has been blocked off with a gate by residents who are not a part of the Tara Oaks Subdivision. Now there are eight houses in the subdivision sitting on twoacre lots, she said.

The county spread gravel over the asphalt that was put there by the owner of the subdivision, she said.

Since the road is private, they are in a catch-22 situation.

Through his attorney Bill Schneller, Hurdle said it will cost him too much to bring the road up to standards. He wants the city’s assurance they will accept the road if he patches it up.

The city refused to grandfather the road in when it was built because the zoning ordinances had been changed by a previous administration to require all city streets be built to higher standards – curbs and gutters, sidewalks, water and sewer.

Hurdle said if he puts that kind of money into the road he would lose money because the subdivision is zoned Residential Estates and not enough houses could be built to make the financials work, according to Schneller.

“We can hardly get into the subdivision and are trying to get help,” Isom-Marion said. “We want to know how to get the road repaired permanently.”

The residents also presented their dilemma to the Marshall County Board of Supervisors, since part of the last segment of the road leads into the subdivision.

“We are quite familiar with that road and subdivision,” said Mayor Kelvin Buck. “And we have had several of our staff look and determine responsibility for that portion that falls within the city limits. The fact is it is a private road and that prevents the city from repairing it according to the law.”

“The way we got where we are is interesting,” Schneller said. “The subdivision was built prior to the road by the bypass (Eddie Lee Smith Drive) being built as a way out.”

The road now would have to have a base, curbs and gutters, and city utilities.

“At that time it would have been expensive, so a stop-gap road was put in by Neal Bain,” Schneller said. “Mr. Hurdle would repair the base and put two inches of asphalt and dedicate the road to the city. Your current road requirements greatly exceed that. Times have changed.”

At the time the road was built, Manny Burch and Doris Avant donated the land for the road because they also foresaw development opportunities along the road, Schneller said.

He said the city dissolved the old subdivision regulations by accident. Schneller did not know when the subdivision was platted.

Alderman Tim Liddy said he was on the board when the subdivision regulations were upgraded.

“We had nothing for estatesize lots,” Liddy said. “I could not accept it at the time because it was not up to the new standards. The decision was made to leave it a private road.”

“The drive served them, not the subdivision,” Schneller said.

Isom-Marion said the subdivision residents are “left in the center of this chaos.”

“We were not aware of all this when we purchased our property,” she said. “At this point, we have to think about it as residents.”

“I think we have a solution,” Buck said. “What does the county say in this matter?”

“The county came in and fixed the road with rock, not asphalt,” Isom-Marion said.

Garon Marion, Isom-Marion’s husband, agreed it is a private drive.

“We are left out there, so we want to see if the city would take the road,” he said.

Schneller said there are 3,200 feet to pave and repair.

“That subdivision is in the path to develop and the city could increase its tax base,” Schneller said, because of the big lots and nice homes.

Isom-Marion asked Schneller if Hurdle would just fill the potholes as a temporary measure.

“He can, but I do not know if he is willing,” Schneller said.

Alderman Mark Miller expressed strong hope that the city could work with Hurdle “to see what we can work out.”

“These people need help,” he said.

Alderman Christy Owens called attention to the current state of affairs with many existing older roads in the city that do not meet the zoning regulations.

“It’s very expensive, if you don’t have the lots to sell,” Liddy said.

Buck said there is potential for flooding in the area that could be developed and that is what ruins the roads if there are no curbs and gutters to direct the water away from the road.

“I’m going to suggest Mr. Hurdle go ahead and fix the road,” the mayor said. “We would then come back with our attorney and determine how we could handle it – whether we could accept the road or not. We wouldn’t take that road until we see what the final product looks like. The reason we would accept it is the city plans to annex.”

Liddy reminded the mayor that the developer is expected to put in water and sewer and pay for the road in subdivision development.

Buck said requiring curbs and gutters is not to punish anyone.

“It’s for erosion control and can be a nightmare,” he said.

Schneller replied, “He will build the road if the city agrees to take it. Otherwise, he won’t spend $100,000.”

Miller said the board of aldermen could enter into an agreement with Hurdle ahead of time and “if he meets the specifications, we would accept it.”

Isom-Marion asked whether the road would still be a private road as the subdivision is located in the county.

“We have to look at the law and legal things,” Buck said. “Right now Mr. Hurdle can fix that road. We have another place we want to annex and we have the same challenges.”

Alderman Bernita Fountain suggested the road be repaired now and it can be brought up to standards when the city accepts it.

Garon Marion Jr. suggested Hurdle be given some specifics so he can see if there could be an agreement between the city and Hurdle.

“He’s got to fix the base,” Schneller said.

“He should have soil cement as a base or it will never work,” Marion said. “Get the base right then put asphalt down.”

“We have the entire city to think about,” he said.

Schneller said he wants the city to agree to accept the road if Hurdle repairs it.

“Otherwise, we know we’re not throwing money down a hole,” he said.

Garon Marion Jr. urged all parties to be open and above board about all transactions.

“Maybe he can patch the potholes right now,” Liddy said.

Buck said throwing asphalt in the potholes would not matter.

“It would be in the same shape in six months,” he said.

In describing the impact of the road on vehicles, John Davis said in a meeting at the board of supervisors, “That road is awful. Flora has bent rims and cars are all out of alignment.”

E-911 coordinator Stacey Reed said the roads in the city are not under the 911 regulations. The city names its own roads, she said.

The road Hurdle built has no name, she said. And it is the only way in and out of Tara Oaks Subdivision.

There is no name at the road and a sign was put up by the county that reads Tara Oaks 1/4 mile, she said, and it points to the entrance of the road. She said first responders have to have a way to find the subdivision.

All roads in the county are named by 911 except those in the city of Holly Springs, she said. Holly Springs opted out of renaming addresses while Potts Camp and Byhalia, two other municipalities, opted in.

Chancery clerk Chuck Thomas said the city could have grandfathered Hurdle’s road in, but didn’t.

Supervisor Ronnie Joe Bennett said if the city had grandfathered the road in, Hurdle would have probably put on asphalt up to the subdivision.

County administrator Larry Hall said it is his understanding the city possibly would grandfather it in because the road was built before the city board acted (on its subdivision regulations).

Terry asked whether the county could go in and patch the potholes.

“We can go if the city gives us permission,” Bennett said.

Isom-Marion said she does not want to be going back and forth between the county and the city asking for help.

Supervisor Eddie Dixon said the subdivision is in his district.

“What concerns me is what if they turn you down,” he said to Isom-Marion.

“Mr. Hurdle needs that in writing, too,” said Isom-Marion. “Otherwise it is just a handshake.”

Hall said if the city annexes the subdivision, that will open it up to build more houses.

“Right now, the ball is in their court,” Bennett said. “They threw it on top of the developer and he just couldn’t pay for it.”

“The road should have been built right the first time,” Isom-Marion said.

“The delay was caused by the bypass construction and then they changed the ordinance,” Terry said.