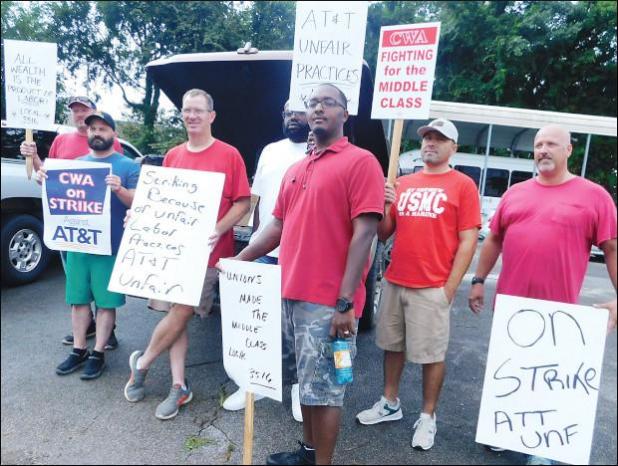 They parked their vehicles in the company yard, turned in their keys and left all their tools, including cell phones, inside.

Monday, they formed a picket line at the AT&T facility, located at Spring Street and Falconer Avenue in Holly Springs. The Communication Workers of America Local 3516 have joined a strike against AT&T in nine southeastern states claiming unfair labor practices.

The local workers unite with 23,500 AT&T employees in the Southeast in striking for fair labor practices, which includes fair bargaining, according to the employees. They said the strike is not about pay. Every four years the Union has to sign a new contract with AT&T, they say. The last strike of this nature was in 1982.

“AT&T is misrepresenting what this strike is about,” said Damion Papineau with the local office. “AT&T showed up to the bargaining table and they told our bargaining committee they were not authorized to talk.”

That is when the Union committee walked away from the table, Papineau said.

There was another complaint. AT&T suspended technicians in Florida who were wearing the union logo on their uniforms, he said.

The third complaint is that AT&T stopped paying the travel expenses of the CWA bargaining committee to Atlanta, which is a part of the current contract, Papineau said.

Only three union workers have crossed the picket line locally, they said. Managers are having to work the area. What that means is that no new service will be installed and problems in the field will not be worked until the strike is resolved.

And teamsters from other corporations, such as United Parcel Service, are refusing to cross picket lines in certain areas, Papineau said.

Chris Pond said from the picket line that AT&T service should still remain up and operational during the strike.

“Essentially, we are not employed by AT&T until negotiations are complete,” he said. “We get no back pay (after the strike is over). The money we lose is lost.”

“It’s not about being angry with anybody. It’s about doing what’s right.”

This group is part of District 3, which includes Mississippi, Louisiana, Tennessee, Georgia, Florida, Alabama, Kentucky and North and South Carolina.

“All we want is for them to come to the table and actually negotiate,” Pond said. “We were sending people to negotiate and they weren’t.”

Marty Richter, spokesman with AT&T, responded to the allegations made by CWA employees.

“A strike is in no one’s best interest,” he said. “We remain ready to sit down with union leaders to negotiate a new, improved contract for our employees.

“We strongly disagree with the union’s claims of unfair labor practices. Our bargaining team is negotiating this contract with CWA leaders in the same way we have successfully done with dozens of other CWA contracts over the years. We listen, engage in substantive discussions and share proposals back and forth until we reach agreement.

“That’s why we’re surprised and disappointed that union leaders would call for a strike at this point in the negotiations, particularly when we’re offering terms that would help our employees – some of whom average from $121,000 to $134,000 in total compensation – be even better off.

“We’re prepared for a strike and will continue working hard to serve our customers.”

Richter said AT&T has reached, and union members have voted to ratify, 20 fair agreements since 2017, covering more than 89,000 employees. This includes five similar agreements reached in late June and early July and ratified by CWA members, he said.

“We look forward to doing the same here,” he said. “It is important to note that the Southeast contract covers fewer than 8 percent of our employees.”