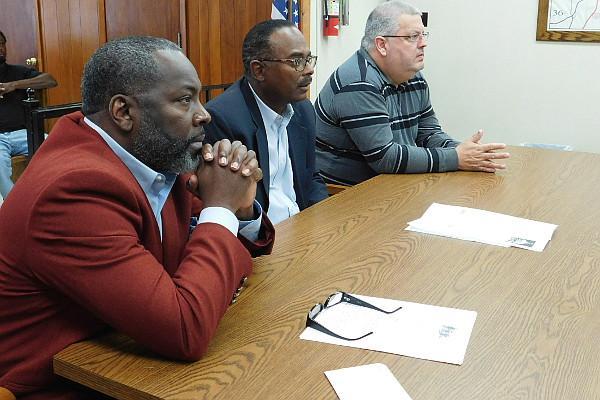 Photo by Sue Watson
Addressing a decline in state revenues before the board of supervisors are, from left,  Rep. John Faulkner, county consultant Gary Anderson and Sen. Bill Stone.

A legislative update by members of the local delegation to Jackson drew fire from the Marshall County Board of Supervisors.

The supervisors are concerned about issues that affect the county when the Legislature faces budget cuts in state agencies.

“I think there are some things you don’t cut,” he said. “It affects you in basically sending it back to local government to pick up the tab.”

He thanked Rep. John Faulkner, Sen. Bill Stone and consultant Gary Anderson for “coming back and telling it like it is.”

“I think you look out for people at home first, not Jackson,” Taylor said.

“If you roll expenses back down to local government, you are raising taxes,” Sen. Bill Stone said. “Some people want to point fingers and say ‘the supervisors did it.’ The worst thing about it is there will be some folks out there not getting care. People should not have to sit in jail just because they are sick.”

Consultant Gary Anderson said some people want to take mental health out of the budget.

Stone said there are some leftovers that could be dealt with in a special session: a bond bill to cover things like rural fire trucks; and stuff that did not get done this year because of infighting in the Legislature.

Taylor said there are not many fire departments in the county that have money to fix equipment such as fire trucks and rural firefighters are working for free.

Stone said budgets that must be taken up before July 1 include monies to operate MDOT, State Aid Road funds, and monies from the Attorney General’s office.

Taylor said he does not see how the county can get around increasing funding for fire departments because trucks and equipment have to be certified.

Anderson said MDA is also in need of funds.

“When money is limited, we’re feeling it (in economic development),” he said.

Highway grant monies have been used to build the roads in Chickasaw Trail Industrial Park, he said.

Stone said legislation raised the penalties for crimes against the emergency responders and law enforcement.

• a $37 million cut to the Mississippi Adequate Education Program. But $20 million was budgeted for special recognition programs for teachers in A and B schools or those schools that advanced two letter grades.

“That’s like painting your house before you pay the mortgage - window dressing,” Stone said.

He said a downturn in state revenues is not happenstance.

“It’s self-inflicted through tax cuts over the last five years,” Stone said. “Last year (2016), we passed the biggest tax cut in the state’s history that includes a phase-out of the corporate franchise tax and eliminating the 3 percent state income tax. Working poor folks are the ones who do not get a tax cut. The vast majority is the corporate tax reduction that begins to go into effect January 1, 2018.”

Stone said some legislators, both Democrats and Republicans, asked to delay the corporate tax cut by one year to see how the economy goes.

“At the end of the day, corporate tax cuts were more important,” he lamented. “There is a disconnect with the legislative leadership between government theory and in practice. In theory, the idea is that tax cuts create economic growth to pay for themselves, which sounds great but, in practice, it has never worked that way.”

Supervisor George Zinn III added that inspections that once were done by the Health Department, will now have to be paid for by the public who will have to pay more to private businesses to get permits.

Stone said the $100 fee currently charged by the health department for on-site wastewater treatment system inspections could cost a contractor or homeowner $1,500 from a private engineer. That could affect new home construction or existing home sales, he said. Restaurant inspections could also slow down and may not be as thorough.