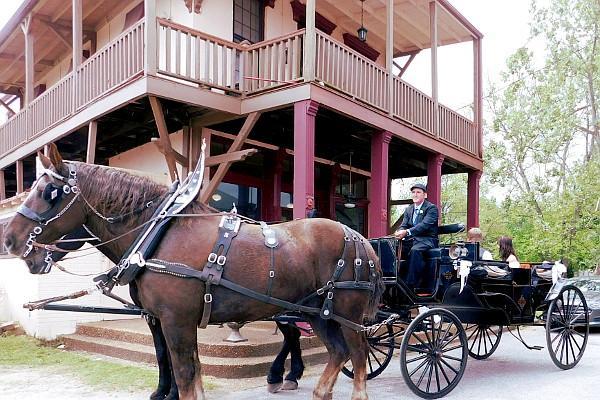 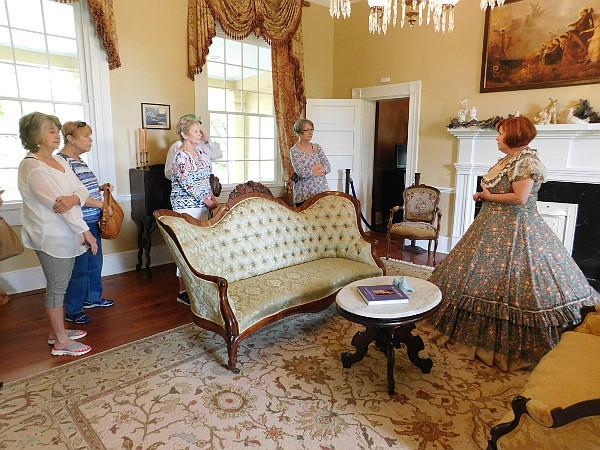 Dawn Donnelly provides guests with an overview of the original living room at Crump Place. 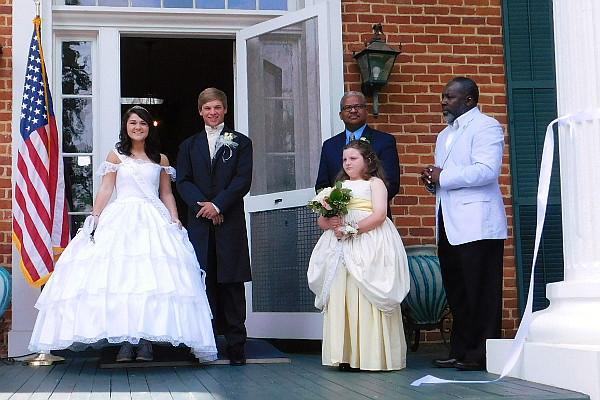 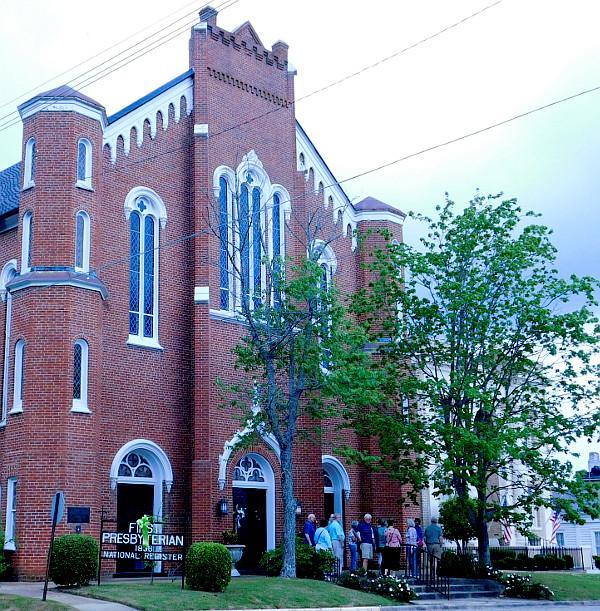 Some visitors for Pilgrimage weekend are pictured in front of First Presbyterian Church, which was open for tours Friday and Saturday.

Cool, wet weather and overcast skies cast a blanket over the 79th annual Holly Springs Pilgrimage last weekend, but spirits were up.

“Our numbers were definitely down,” said co-chair Tish Summerlin. “For a wet and cold weekend, however, we did pretty good.”

The attendance numbers are still being compiled.

Some of the highlights of the Pilgrimage included the nighttime events – Juleps & Gene­rals Friday and Montrose under the Moon­light Saturday. The Dan­tones played and Taylor Grocery catered the meal Saturday night.

Plant It Pink luncheons at the Kate Freeman Clark Art Gallery were well attended, and Sunday brunch at Montrose was also well attended.

Summerlin expressed appreciation to the people of Holly Springs, mayor Kelvin Buck, alderman-at-large Tim Liddy and the police department for all the assistance to make this year’s Pilgrimage a seamless event.

“We are very appreciative for their assistance with the tourists and efforts to help make this a special weekend,” Summerlin said.

Her son, escort Wil Summerlin, a senior at Marshall Academy and the Pilgrimage queen, Taylor Blaker, a junior at MA, were busy throughout the weekend participating in the various activities.

Summerlin said her daughter, Anna, was Pilgrimage queen in 2014 and she was queen in 1978.

Membership in the Holly Springs Garden Club, which supports the upkeep and restoration of Montrose, is around 40.

“I’m constantly in awe of our members, who are just a group of working mothers, who give so tirelessly of their time, effort and money each and every year,” Summerlin said. “I’m pleased and humbled that we pull together so well to get this done every year.”

Summerlin thanked all of the homeowners, but thought the story of the Donnellys who opened Crump Place this year for the tour, was especially interesting.

“I just love their story,” she said. “They came down here to visit two years ago and then moved here. We’re always pleased to have new families to come share our excitement over the town and then the Pilgrimage.”

Other places on the tour included Hilltop, the Depot, Cuffawa and Montrose.

The Pilgrimage was a first for Martin and Dawn Donnelly, who bought Crump Place in July 2016. They moved here from Bartlett, Tenn., after visiting the Pilgrimage two years ago.

An estimated count of visitors at Crump Place, the childhood home of the late E.H. “Boss” Crump, who became famous as mayor of Memphis, Tenn., was about 420, Dawn said. Friday about 172 people toured the house, Saturday another 156 and Sunday’s attendance was just over 90.

“We are very fortunate to move into a fully restored home,” Dawn said.

Crump Place was  restored in 2002 by David Person, who sold it and bought Burton Place on South Memphis Street and restored it as well.

In preparation for the Pilgrimage, the Donnellys planted roses beside the front walkway, after pressure washing the bricks.

Pictures and articles said the Crumps had roses in front, Martin said.

The couple spent the summer of 2016 getting furniture for Crump Place and the yard work was crammed into an intensive six weeks.

The Donnellys intended to purchase Colonsay Cottage on East College Avenue, but they could not because it took them a while to sell their house in Bartlett.

But no love was lost because the Donnellys saw Crump Place and fell in love with it.

“We believe God was steering us to the house he wanted us to have,” Martin said.

Dawn joined the Town and Country Garden Club and the Thursday Club and the couple feel the warm welcome extended to them from the community.

“We’ve made so many friends,” Dawn said. “The people of Holly Springs are so kind. We’re just trying to help wherever we can.”

The Donnellys have three children – J.R., a student at Ole Miss; Elizabeth, who lives in Memphis; and Kylie, who lives with her husband in Virginia Beach, Va.

Martin is a pilot for FedEx, out of Memphis International Airport.

The couple have one tiny secret they reluctantly divulged. They originally lived in Indiana and have lived in New Orleans and other places, prior to living the last 20 years in the Memphis area.

“We’re yankees, but we got here as fast as we could,” Martin said. “Nobody’s a stranger in this town.”